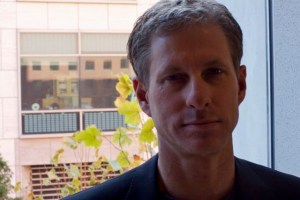 Peer-to-peer lending startup Prosper makes no secret of its support for the Occupy Wall Street movement, which seeks to break the hold of banks on the American political process. Prosper wants to do a similar thing, by creating a sort of bank that is owned by and run for the people.

Based near the OWS encampment in San Francisco’s Justin Herman Plaza, Prosper is using crowdfunding site Indie Gogo to host its 99 Sandwiches campaign, raising money to donate 99 sandwiches per day to feed the protesters.

But Prosper’s own platform has the power to do more than donate sandwiches. It could shake up the banking industry at large, if its model catches on.

“Everybody knows that banking is broken, the system is broken,” Prosper co-founder and chief executive officer Chris Larsen told VentureBeat at Crowdconf, a crowdsourcing conference in San Francisco, today. “There’s no reason with the technology we have today, all this great stuff, that you couldn’t completely rewire banking in five years.”

Prosper makes it possible for individuals to lend out money and earn interest  on the money they lend, which has been the sole province of banks. But the reason this was not possible before wasn’t lack of technology, but because of regulations meant to protect banks.

If successful, Larsen thinks that the future of the banking industry could be Silicon Valley, not Wall Street.

“You need banking, but you don’t need banks,” said Larsen.

In order to launch his company, Larsen invested $10 million and spent five years fighting through a bramble of regulations meant to protect banks and stifle innovation. As evidence of the banking industry’s hold over the political system, Larsen pointed out that there are 61 members of the House Committee on Financial Services, the legislative entity that governs banking and finance. He said that there are perhaps two startups that exist today that are able to charge interest on peer-to-peer transactions, out of as many as 100 that were started around the same time as Prosper.

In a recent blog post, “Why Hasn’t a Facebook of Banking Emerged,” Larsen implored anti-Wall Street protesters to use new technologies to support the movement, and support innovation.

…[W]hile it’s important to keep up the demands for change, we also need you to start using these new technologies and spreading the word when you find one that excites you. Use a crowdfunding site to support a project, make a $25 bid on a peer-to-peer lending site. Start-ups are, well, start-ups, and every show of community support could make the difference between obscurity and escape velocity. Vote with your wallet.

This last point is an important one.

Larsen does, however, think there’s a role for banks in preventing their own demise, and he encourages them to make their infrastructure available to startups, as a platform for innovation.

“[Y]ou don’t have to just stand by and get pummeled….Even if these start-ups are tiny now and even if their stated mission is to destroy your franchise, partner with them. Technology is not going away, it’s accelerating with or without you. It’s time to stop cutting your R&D budgets and start embracing new, big ideas.

While Chase bank may have an iPhone app that allows customers to make deposits to their accounts by taking photos of checks, Larsen says this type of solution is “bolting on little pieces to a system that isn’t serving people well.”

Prosper has funded more than $271 million in person-to-person loans to date. As a startup, it has received $74.5 in investment from Jim Breyer of Accel Partners; Tim Draper of Draper Fisher Jurvetson; Jerome Contro of Crosslink Capital, CompuCredit; Omidyar Network; Capital One Co-founder Nigel Morris of QED Investors; Court Coursey of TomorrowVentures and Larry Cheng of Volition Capital.

Larsen’s last company was eLoan, which he co-founded in 1998, and eventually took public.

Prosper is going to need luck, time and a lot of support if its going to have a chance of taking on the multi-trillion-dollar financial industry, which accounts for 7 to 8 percent of the U.S. gross domestic product, twice as large a proportion as it commanded in the 1960s. Chances are slim that executives at banking giants like Citibank or Bank of America are worried much about Prosper, if they have even heard of it.

Such long odds don’t daunt Larsen, who has passion to push him forward.

“We’re in a crisis here. We have a yield-starved world, and we have a credit-starved world, which is kind of funky. That means banking is truly not working.”