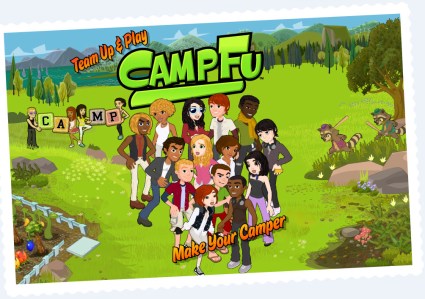 The New York-based company says those players come from 110 countries and spend an average of more than 60 minutes playing and socializing on the site.

The cartoony virtual world is a casual one, where players can play games for short snippets of time. And it targets mostly a teen demographic. One of the unique aspects of real-time multiplayer games is that players can cooperate with each other to perform tasks. Most sites only allow for real-time combat.

The CampFu world has an environmental theme, and the characters train at a summer camp where they learn martial arts. They use those skills playing “whack a mole” style games with a sense of humor. Players can form alliances with each other, a fact that encourages them to socialize on the site.

Margaret Wallace, chief executive of Rebel Monkey, said players have responded to how they can use their virtual characters, or avatars, inside games within the world as the play in real time. Rebel Monkey will be launching new parts of the CampFu campground and redesign the site this week.

Hitting 100,000 players is a milestone, but Rebel Monkey has a bunch of hurdles to overcome before it can take on the biggest casual virtual worlds, such as Habbo Hotel. It still has to monetize those users and needs to keep investing in the world to keep its momentum going.

Wallace said that the company is monetizing the CampFu offering primarily through the sale of virtual goods and a VIP subscription offering. CampFu uses a dual currency system — Tickets (which you earn for doing stuff like playing games in CampFu) and FuCash (which you buy in packs, starting at $5). Coming soon, players will be able to buy things like cabin furniture or ornaments.

Rebel Monkey was founded by Wallace and Nick Fortugno, creator of the popular Diner Dash casual game franchise, in 2007. The company has 30 employees and raised funding from Redpoint Ventures. The company is seeking a new round of money. Wallace said the company is engaged in talks with a variety of possible partners.