The new software is critical for Microsoft, which has seen its share of the smartphone market drop to 9 percent of the market in the second quarter, according to market researcher Gartner. That compares to 13.3 percent for the iPhone, 18.7 percent for the BlackBerry, and 45 percent for Nokia. Today’s introductions will determine whether Microsoft has a chance to regain any market share from its rivals.

The Pure phone (right) is a touchscreen phone that is one in a series of Windows Mobile 6.5 phones launching today. HTC launched five models, including the HTC Sense, which has a new kind of user interface.

It has a 3.2-inch screen, a 5.0 megapixel camera, and five hours of talk time on a battery charge. That all sounds impressive, but we live in an age of the iPhone. It’s hard to like something that is relatively plain, like this phone.

But the software is really what is useful here. Microsoft markets the experience in a clever way. It says it’s a “smartphone that’s smart enough to bring all the parts of our lives together,” striking a balance between business life and personal life. You can get all sorts of communications apps: voice, email, instant messenger, photo sharing, and social networks. It is what I call a modern cell phone OS because it lets you customize the phone for what you want to get out of it.

This new version of Windows Mobile finally has something to go up against Apple’s AppStore. The Windows Marketplace is the place where you can go to download apps to your phone. It’s a reasonably well organized store with all of the basics — some 600 apps in a variety of categories. It can sort apps into “most popular,” “showcase,” “what’s new,” and “categories. As of tonight, there are 78 games available. There are 12 communications apps, 11 entertainment apps, 14 reference apps, 12 lifestyle apps, 14 travel apps, and four social networks.

If you make a purchase, the phone prompts you to enter a Windows Live ID, such as a Microsoft Hotmail address. You don’t have to enter any more information if you have a credit card number already associated with the Windows Live ID. If you are not happy with your purchase, you can get a refund within 24 hours. 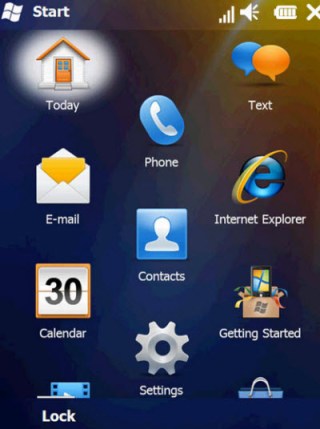 There is, predictably, only one search app available: Microsoft’s Bing. The good thing about it is that it finds things based on how close they are to you. If you search for a Taco Bell, it will come back with the nearest location. I tapped on the “gas prices” app, which finds the cheapest nearby gas. It came back with a location nine miles away. But there are some nifty apps bundled with the Bing search app. The traffic app, for instance, gives you a look at the traffic on local freeways with a single button push. You can use voice to conduct Bing searches if you can’t tap.

Facebook and MySpace are available as apps on the Windows Marketplace. You can also find AP Mobile for news, which you can customize for your local zip code. If you connect to Wi-Fi with the HTC phone, you can download the apps quickly over AT&T’s broadband data network, dubbed UMTS/HSDPA.

The Windows Mobile 6.5 Professional version works with touchscreen phones and can recognize a standard set of gestures: tap, tap and hold, pan and flick. This HTC phone has a stylus that lets you pinpoint exactly what you want to hit on the screen, but the touchscreen itself is not particularly responsive. But the phone responds with an animation to let you know it recognized a gesture.

The home screen(middle picture)  is attractive. You can scroll up and down by flicking your finger up or down the screen. There’s a rich set of personal and business apps available for you to activate with a single tap. You can access your Tweets, sports scores, stock quotes etc. There’s an FM Radio and Google Maps.  LocateMe will fix your location without using GPS navigation. You can customize your Start menu by personalizing the background image or adding widgets and apps. You can set your wallpaper or download new ringtones. 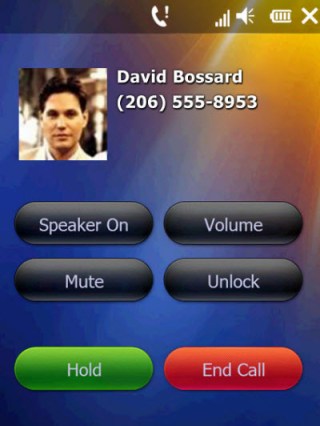 When the phone’s screen is locked (right), you can still perform some actions. You can see your missed calls and respond to them without unlocking. You can put a call on mute or hold or speaker phone without unlocking it. That’s nothing special, but it’s a requirement these days. And it shows Microsoft is thinking about everyday use.

On the productivity side, you can access Word or Excel documents via Microsoft Office Mobile. You can view, modify, and create Office documents from the smartphone. Of course, no person in their right mind would really want to do this, given the highly inaccurate touchscreen keyboard. As with a BlackBerry, you can directly dial a phone number embedded in an email or meeting invitation. If it’s a conference call number, Windows Mobile will even input the conference passcode for you.

One area where Microsoft beats the iPhone is the support for Adobe’s Flash content. That means you can watch videos such as YouTube with good quality levels. The Internet Explorer Mobile web browser has one of the same features that Safari on the iPhone has: an auto-complete function that is based on your history of past searches.

Windows Mobile 6.5 has improvements that prolong the battery’s life. Email, for instance, uses less power than it once did. MyPhone lets you easily sync and backup data on your phone, such as contacts or text messages. You can back the data up to a PC or a password-protected web site. That way, you don’t worry about losing your contacts or photos when you lose your phone.

Overall, Windows Mobile 6.5 moves Microsoft into a somewhat defensible position compared to its rivals. But observers are eagerly awaiting better things from Microsoft when Windows Mobile 7 launches sometime next year. That is supposedly based on Microsoft’s Project Pink, which has lineage to the acquisition of Danger, maker of the Sidekick phones.

But for now, the iPhone has a number of advantages over Microsoft. The upshot: you can still get a much better experience with an iPhone, which has superior multitouch capabilities and accelerometer-based controls that work wonderfully in some apps. And there’s still far more choice available on the iPhone.