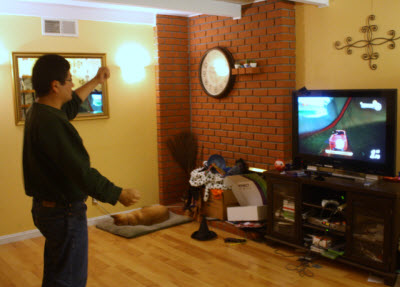 Microsoft has created a unique experience with its Kinect motion-control gaming system. On its face, it’s more compelling than either the Nintendo Wii, which is now showing its age, and the Sony PlayStation Move, the wand-like controller from Sony that doesn’t go far enough in motion sensing.

As such, Microsoft has created the novelty of the holiday gaming season: a game system that can recognize your body movements, your voice commands, and even your face — all without a traditional video game controller. Playing a game with your body as the controller puts a smile on your face, gets you off the couch, and will even convince some of your non-gaming friends to try it out. It will take you back to your childhood, when you pretended you were an expert boxer by acting out the motions. The problem is that Kinect has some design problems and isn’t accurate enough to be the cure-all for the game industry’s anemic sales, which are down 8 percent this year.

My opinion in a nutshell: Kinect seems magical at the outset; it has lots of untapped potential; but the execution and accuracy could have been better. As Sony’s motion-sensing guru Richard Marks suggested in our recent interview, there are just too many times when you want to do something and Kinect thinks you want to do something else. As my 10-year-old commented, “It’s not as good as I thought it would be.” And my non-gaming wife still managed to crash her car nonstop and drive the wrong way in the Kinect racing game, Joyride. The conclusion I draw from that is that the designers haven’t truly yet figured out how to take the difficulty out of gaming for non-gamers. 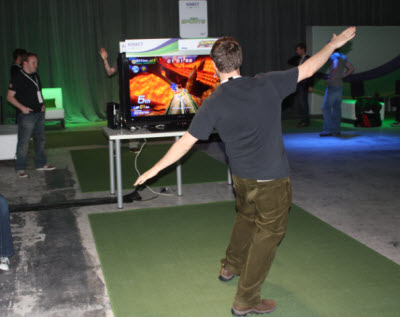 If Microsoft’s ads are to be believed, Kinect is supposed to set our imaginations on fire and blow us away with its ease of use. In some respects, it manages to do that. You can, for instance, play soccer by kicking with your feet, not pressing a button or swinging your arm. That’s a new experience that hasn’t previously been possible in console games.

I do believe that Kinect will become as important as the Xbox 360, Halo and the Xbox Live online gaming service among Microsoft’s great contributions to gaming — in the long run. And it is a far better designed product than many of Microsoft’s failures (as observed by the New York Times’ David Pogue): Windows Vista, WebTV, Spot Watch, Ultimate TV, Ultra Mobile PC, Tablet PC, Smart Display, Portable Media Center, Zune, and the Kin phone.

But in other places, Kinect falls far short of our expectations. Reviewers are giving initial Kinect games fairly low scores ranging from 56 (Kinect Joyride) to 84 (Dance Central) out of a possible 100 total points on Metacritic, which aggregates game review scores. I have to agree that the Kinect games I’ve played are fairly average so far.

My kids still prefer the early generation of motion-control games such as Wii Sports and Mario Kart for the Wii, which are just as wildly inaccurate in responding to some of your movements but can make you laugh — and in a party setting, that laughter is contagious. Kinect games will make you smile, but so far they won’t make you guffaw until you double over — unless you crash into your fellow player while making a move.

Now the question is, does any of that matter? Reviewers are notoriously cranky and unforgiving. The Metacritic rating for Wii Sports, the spectacular title from 2006 that helped get the Wii off the ground, got an anemic 76 rating on Metacritic. The public, on the other hand, loved playing Wii Sports. My 70-something mother-in-law and my then-four-year-old kid had a ball playing Wii Sports together on the Nintendo Wii. The Wii was the first game system where it made sense to sell the machine by showing pictures of the players having a great time rather than showing a screen shot from a game. 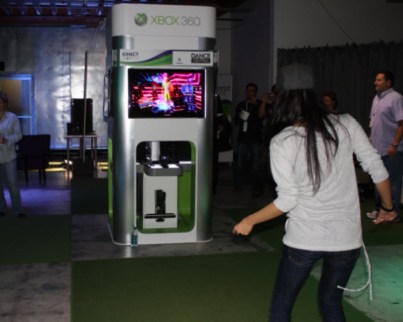 Microsoft is pouring on the marketing for Kinect. Having picked up on Nintendo’s selling tactic of focusing on the players and not the screen, the company is aiming Kinect at the community of mass market non-gamers, who are more easily pleased than the hardcore critics and who don’t read game reviews.

My now-seven-year-old kid cracks up uproariously whenever she sees the Kinect replay pictures that show the players’ crazy movements, taken by the Kinect camera. The kids laugh and smile, tire themselves out, and chatter incessantly while playing. Kids can be forgiving, and the games can be designed in a way that compensates for Kinect’s weaknesses. That’s why Kinect may take off even though it isn’t perfect. Microsoft is predicting 5 million unit sales this quarter.

In that sense, I’ll acknowledge that I could be completely wrong about Kinect. But in my own humble opinion, Microsoft needs to upgrade the experience with a 2.0 release quickly or launch some better games. Eliminating latency, or delays, and making Kinect more accurate are at the top of the list of things to fix. The good news is, Microsoft can probably upgrade the experience with software downloads.

I’ve had some quality time with a number of Kinect launch titles, including Kinect Adventures (which is bundled with the system), Kinect Sports, Joyride, MTV’s Dance Central, and Ubisoft’s Your Shape. Full told, there are 17 games available, mostly for $48 a piece.

Of those, Dance Central is the best. It makes you feel like you can learn any dance just by following step-by-step instructions. In dancing, you make sweeping moves that are easily recognizable; the camera can pretty much capture what you do. It doesn’t have to know that you turned your wrist slightly to the left or slightly to the right. It just catches you shaking your behind. In that sense, Dance Central as a game is perfectly tuned to what Kinect can handle. 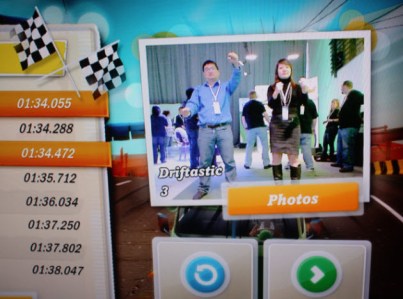 Your Shape also has a lot of fun activities that will make you sweat and lose a few calories. I also like how it inserts your own video image into the scenery of the game so you can see how you need to move. That is an example of using a clever video feature to make up for the fact that Kinect isn’t terribly accurate at capturing your actions.

Kinectimals is a game that is a mixed bag of highs and lows. It’s very cute. You can adopt a cuddly baby tiger or leopard and explore an island with them. You can pet them and make them fetch balls, much like you can in the game Nintendogs on the DS handheld. But there’s one point early in the game where you have to throw balls at a bunch of targets, as if you were bowling. The system was so inaccurate that it didn’t know which direction I was aiming for.

We have had a couple of clues about what could have been done better. Microsoft considered adding a secondary processor, built into the Kinect hardware itself, that would have sped up the processing of the 3D data and presumably made the Kinect sensors more responsive to your movements. Instead, Microsoft chose to eliminate that processor in the name of cost savings. It made the Kinect slower and less responsive. When you’re playing a fast-action game, that’s the last thing you want.

If Microsoft put a wand-like controller in your hand, it would give the system much better clues about where you are and what you intend to do with your body, as with the Sony PlayStation Move. You could then use your hand to press buttons when you need split-second reaction times, like when you’re shooting a gun. I think that the very best system would combine the 3D image capture of the Kinect camera and the in-hand wand of the Sony Move. But that would also be a more expensive system, and at $149, Kinect is already a pretty hefty expenditure for a lot of households. 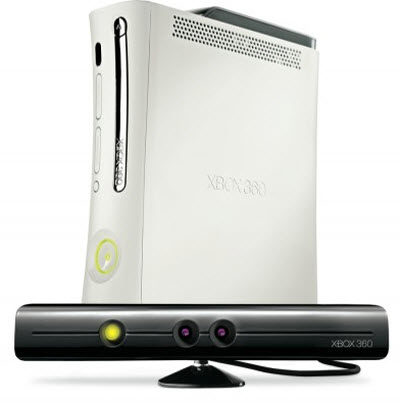 You can see the delay problem especially well in the boxing games (as in Kinect Sports). You throw a punch and have to wait for the effect before you can throw another one. When you try to jump hurdles in a race in Kinect Sports, you have to time your jump perfectly in order to make it over the hurdles. The game gives you green lights to indicate when you should jump. That compensates for the inaccuracy in the timing. But you still hit the hurdles a lot.

Inevitably, one of the players (at least in my home) will shout that the game character on the screen didn’t do what the player was doing. When I try to throw a discus or a javelin in Kinect Sports, I will mess up one out of three times because Kinect can’t figure out exactly what I’m trying to do.

My youngest kid had the most trouble because she always wanted to move around the room too much. Kinect has a limited field of vision. It will tell you to move back or to the side if you stray out of the camera’s view. But it happened so much with the youngster that it interrupted the play. Kinect is smart enough to adjust the camera upward, downward, or to the side when it needs to do so. But you have to be very careful to stay in the visible zone.

Not everything is frustrating. The cartoon-like Kinect Adventures has some clever games, such as 20,000 Leaks, where you have to use your hands, feet, and head to plug water leaks in an undersea aquarium’s glass that spring open when fish and sharks barrel into the glass. The game requires you to move around a lot. It is accurate enough, and it shows that not every game has to have precision accuracy in order to be fun.

What this means for players is that you have to learn how to play with Kinect. I expect that I will come to enjoy the same games over time because I will learn to adapt to Kinect’s shortcomings. But the promise of Kinect was that it would be able to capture my movements and translate them into the game. It doesn’t do this perfectly, so I have to adjust my game playing to be more successful. As an example, I did better with the javelin by exaggerating my movements so that Kinect couldn’t miss what my intentions were. 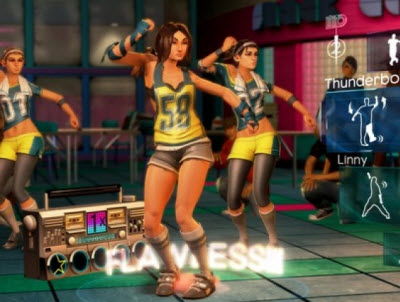 To me, this isn’t failure. If I had to put a number on my disappointment, I’d say Kinect gets a rating of 80 out of 100. Hopefully, Kinect is a system that can be trained to be more accurate and that can be improved through software downloads. And game designers are likely to learn from their first experiences in designing for Kinect and will likely do better the next time around. I’m willing to give Microsoft credit for creating something that is innovative and reaches higher than any other game system out there. I expect there will be outstanding games made for Kinect over time that would let me rate the system at 90 out of 100 or better. There just aren’t any in the initial batch that I’ve tried out. In fact, these games make very little use of Kinect’s intriguing features: the ability to recognize voices and faces.

You could call me a killjoy for being a critic. But Microsoft says Kinect is just the beginning of a new way to control all sorts of computing devices. Motion-sensing is going to be a big part of the user-interface of the future. If that’s true, then the company had better get it right.