Cloud infrastructure spending has gone through the roof during the pandemic, due in large part to the rapid embrace of remote work. This has benefited SaaS businesses that operate in the cloud, like Shopify, which has quadrupled in valuation over the past year. But as more businesses flock to the cloud, the need to protect all their valuable data becomes more pronounced.

Against this backdrop, Canadian back-up-as-a-service (BaaS) company Rewind today announced that it’s expanding its coverage to include GitHub, the largest source code host on Earth, by acquiring Germany-based BackHub. Terms of the deal were not disclosed.

Rewind raised its first notable outside funding less than a month ago, securing $15 million in a series A round led by Inovia Capital.

Founded in Ottawa, Canada in 2015, Rewind currently offers data backup and copy services for businesses running Shopify, BigCommerce, and Intuit Quickbooks. While such SaaS platforms have their own systemwide data backup tools in case of catastrophes that would impact all users, they don’t typically offer this to customers at an account level. This division is what’s known as a “shared responsibility model,” where the platform owner assumes some of the responsibility for the infrastructure security and disaster recovery while users take on other aspects, such as managing permissions and password security and ensuring they create backups of all the data that goes into their account. This is essentially what Rewind handles.

BackHub, which was founded in Berlin in 2014, is a relatively lean bootstrapped outfit with just three employees, including founder and CEO Daniel Heitz, who will now join Rewind as a senior product manager. Rewind will continue to offer BackHub through the startup’s own website and the GitHub marketplace, with the same pricing structure, which starts at $12 per month for up to 10 repository backups. 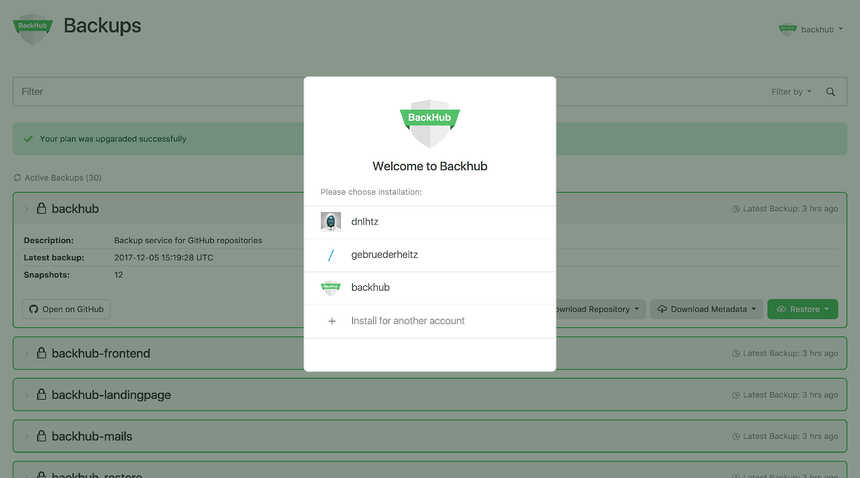 Despite its fairly low-profile status, BackHub claims some 1,000 customers, though it was only at liberty to reveal one: MailOnline, the global news website belonging to U.K. newspaper The Daily Mail.

It can be easy to assume all your SaaS data is safe because of a platform’s robust infrastructure and security, but there are many scenarios that make backing up data essential, including compliance obligations and various external and internal risks.

“Aside from the common sense wisdom of backing up your data in at least two separate systems, many larger customers have to comply with a range of compliance mandates surrounding sensitive data,” Rewind CEO Mike Potter told VentureBeat. “SaaS data is vulnerable to multiple risk vectors: ransomware, human error, disgruntled employees deleting data, misbehaving third-party applications, and so on.”

While there are other options for businesses looking to create backups for all their GitHub data, these often entail a significant manual investment and offer limited utility. “Those tools do a good job of extracting the data, but they’re not particularly useful for restoring a code repository in GitHub, which is where the value [in BackHub] really lies,” Potter added.

BackHub promises to create a GitHub backup in minutes, including all the metadata associated with each repository, and auto-syncs it to ensure it’s kept up to date. A separate BackHub app helps companies restore all their data immediately, should the need arise, while BackHub can also generate audit logs for enterprise compliance requirements.

BackHub works with both private and public repositories, meaning it’s designed for proprietary and open source software (OSS) data backups. Open source intersects with just about every piece of software these days, from scripts that help servers run faster to code that contributes to systems architecture and APIs. Moreover, the pandemic has accelerated open source adoption in the enterprise, and GitHub data suggests 72% of Fortune 50 companies use GitHub Enterprise for their private projects.

BackHub was also running an early-stage program to support GitLab and Bitbucket, which will eventually extend Rewind’s coverage even further. Elsewhere, Rewind is in the early stages of introducing additional backup support for Trello, Jira, Zendesk, and Xero.