One quarter after their biggest drop in history, global PC shipments dropped another 10.9 percent this quarter as traditional computer sales have now fallen for a record fifth straight quarter, Gartner said.

Essentially, 2012 marked the end of the reign of the PC.

“We are seeing the PC market reduction directly tied to the shrinking installed base of PCs, as inexpensive tablets displace the low-end machines used primarily for consumption in mature and developed markets,” Gartner analyst Mikako Kitagawa said in a statement.

The decline in shipments was not limited to any one region. Asia Pacific had five consecutive quarters of decline, mirroring the global results, while EMEA (Europe, Middle East, and Africa) has seen two straight declining quarters.

“In emerging markets, inexpensive tablets have become the first computing device for many people, who at best are deferring the purchase of a PC,” Kitagawa also said. “This is also accounting for the collapse of the mini notebook market.”

In a competition of losers, Lenovo was the key winner, carving out the largest single share of any global player, and losing less than 100,000 unite shipments quarter-over-quarter. 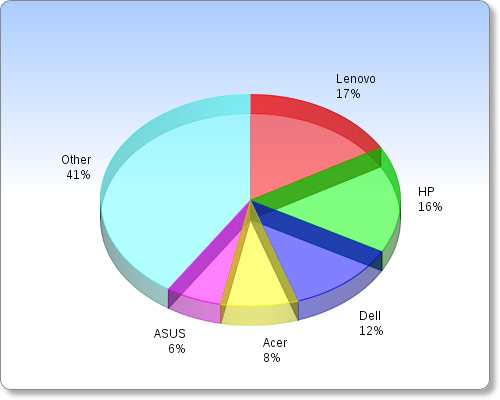 However, in the U.S. market, HP managed to hold on to first place with a 300,000 unit margin over Dell and more than double the shipments of third-place Apple. And the U.S. market showed only a 1.4 percent decline, year over year, less than declines in the previous seven quarters as PC sales actually rose slightly from the previous quarter — thanks to pros … and Windows XP.

“Our preliminary results indicate that this reduced market decline was attributed to solid growth in the professional market,” Kitagawa said. “Three of the major professional PC suppliers, HP, Dell and Lenovo, all registered better than U.S. average growth rate. The end of Windows XP support potentially drove the remaining PC refresh in the U.S. professional market.” 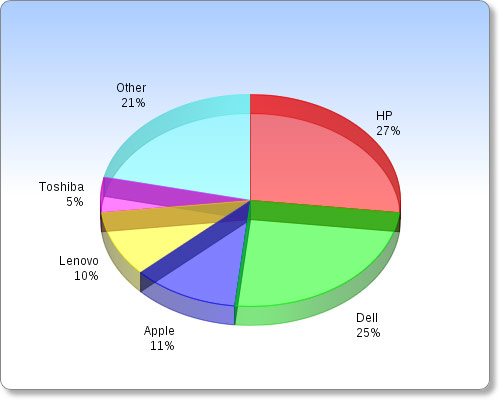 It’s clear what’s driving the change: People are buying tablets, not desktops, and not laptops. New touch-enabled laptops, however, and all-in-one desktops are giving traditional PC manufactures some cause for hope.

“The sharp decline … was partly due to the shift in usage patterns away from notebooks to tablets, and partly because the PC market was exposed to inventory reductions in the channel due to the start of the transition to new Haswell-based products,” Gartner analyst Isabelle Durand said. “Touch-based notebooks still account for less than 10 per cent of the total consumer notebook shipments in the last quarter.”

One thing that’s not to blame is Windows 8.

As Gartner noted, Apple’s shipments are also down, meaning that what we’re seeing here is a systemic shift in volume from PCs to smaller, more portable devices.