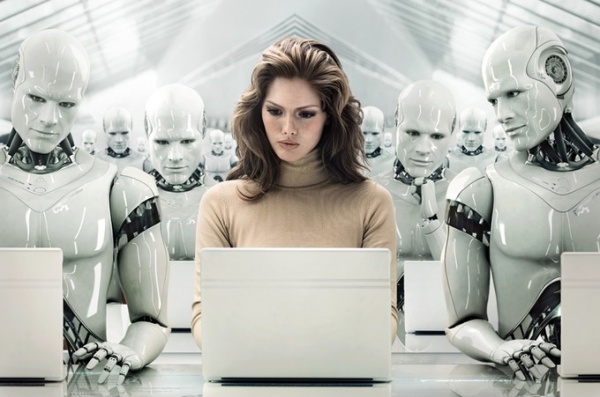 Robots are on their way into your workplace, but you may not be there to complain about it.

“Many of us will live to see the day where we have physical, non-human colleagues,” says Matt Beane, a researcher at MIT’s Sloan School of Management. Beane’s research addresses what he calls “The Avatar Economy”, where remote workers operate robots. Such robots are already used for tasks which require highly skilled labour and physical presence but where it’s either too dangerous or extremely expensive to use human beings. Aerial and ground-based robots were used in the Fukushima Daiichi nuclear disaster, for example, to help assess system and structural integrity and evaluate demolition plans.

According to Beane, the next wave of robotic workers will be in retail, security and remote supervision of manufacturing operations. Telepresence robots like those made by DoubleRobotics (and their human operators) will help you to find the right TV in a retail store or allow an operations supervisor in Chicago to do quality control on an assembly line in Shanghai.

But robots are just one small slice of our automated future. Google’s driverless car depends on the company’s massive sensing, mapping and data sorting network. Technologies like Big Data, the Internet of Things, Speech Recognition and Machine Learning will make robots smarter but that’s the least of their applications. “Robots will not be a discrete element of the change in the economy, but rather the physically extensible part of this ever-expanding bubble of underlying technology.”

“The next frontier for automation is non-routine work,” explains Beane. “Some of the biggest changes in work could be at the high end. These jobs can be automated without a physical avatar.” So while taxi drivers and farm workers can be replaced by robots operated by Artificial Intelligence (AI) or a human operator, it’s still expensive to manufacture that hardware. “Most automation will be intangible. It’s progressing very rapidly and is much less expensive than physical production. Once you have got good AI, it’s replicable at almost zero cost.” That, gentle reader, means you. Replacing lawyers or software developers or technology journalists with AI could result in the ultimate scalable business.

These developments raise some rather uncomfortable questions for non-extensible human beings. “Who am I if this robot can do my job?” says Beane. He points to surgeons as an example of highly skilled workers who already work with robots and will face this dilemma. “This is one of the most narcissistic, ego-driven working cultures you can imagine and many of us owe our lives to that culture. Being decisive in the face of imminent death or disability takes an almost inhuman amount of confidence and skill,” he elaborates.

A surgeon’s whole identity is based on incredibly high status, skill and autonomy relative to other professions. “Yet when they use a Da Vinci surgical robot, if they stray outside the surgical field, the robot can be programmed to resist. They get force feedback on the manipulators. Even the best surgeon in the world can be told by the robot, multiple times during an operation ‘You shouldn’t be doing that.’”

So is all automation bad for humans? Beane has studied hospitals using Aethon’s Tug robots, which move supplies around the building. No jobs were lost. In hospital pharmacies Tugs were used to deliver drugs. “Pharmacy technicians spend two to four years in schooling and certification but they were spending eighty percent of their time ferrying drugs around. Now the technicians are doing the things they were trained to do and have much higher job satisfaction.”

In general though, if automation significantly reduces the amount of work there is to go around, this could lead to fundamental structural problems in the economy such as higher concentration of wealth, greater inequality, fewer high-paying jobs and lower consumer spending. “We may automate ourselves into a recession,” concludes Beane.