The Salesforce.com chief executive and co-founder dropped a hint of something called an Analytics Cloud last month when he tweeted out a picture of a draft agenda for the company’s Dreamforce conference this week. Today, Salesforce is taking the wraps off a major new cloud-based application called wave that fits that description. It lets businesspeople easily explore and visualize the data their companies keep inside Salesforce and several other sources.

The new service from Salesforce, whose mobile app is already available for iOS, amounts to a major step forward for the enterprise software, not only because it expands the company’s reach beyond the sales, marketing, and service software categories, but also because the release changes the dynamics of Salesforce’s relationships with partners that have offered business-intelligence (BI) or data analytics capabilities in the past. Some are formally announcing partnerships; others aren’t. In any case, it’s a big day in data world.

Not that the arrival of Wave comes as a surprise. Salesforce bought BI software startup EdgeSpring last year. And Salesforce did call on EdgeSpring’s technology to provide search-indexing capabilities for Wave, Anna Rosenman, director of the analytics cloud, told VentureBeat in an interview.

But Salesforce also poured lots of its own effort into building a completely new product that’s intuitive enough for any person to use — just like such popular games as Angry Birds, Candy Crush Saga, and Farmville. The idea was to make data actionable.

“It’s not to be sitting on the shelf, static, siloed, and away from individuals,” Rosenman said. “It’s here to inform us, so we can make the right decisions going forward.”

At the same time, Salesforce wanted the service to pack serious power. That way, it’d be possible for an analyst at a big company to pull up millions of rows of data and apply several filters before making elegant charts to share with colleagues.

“I didn’t need to look through a manual to go through this,” she said during a demo of the service. 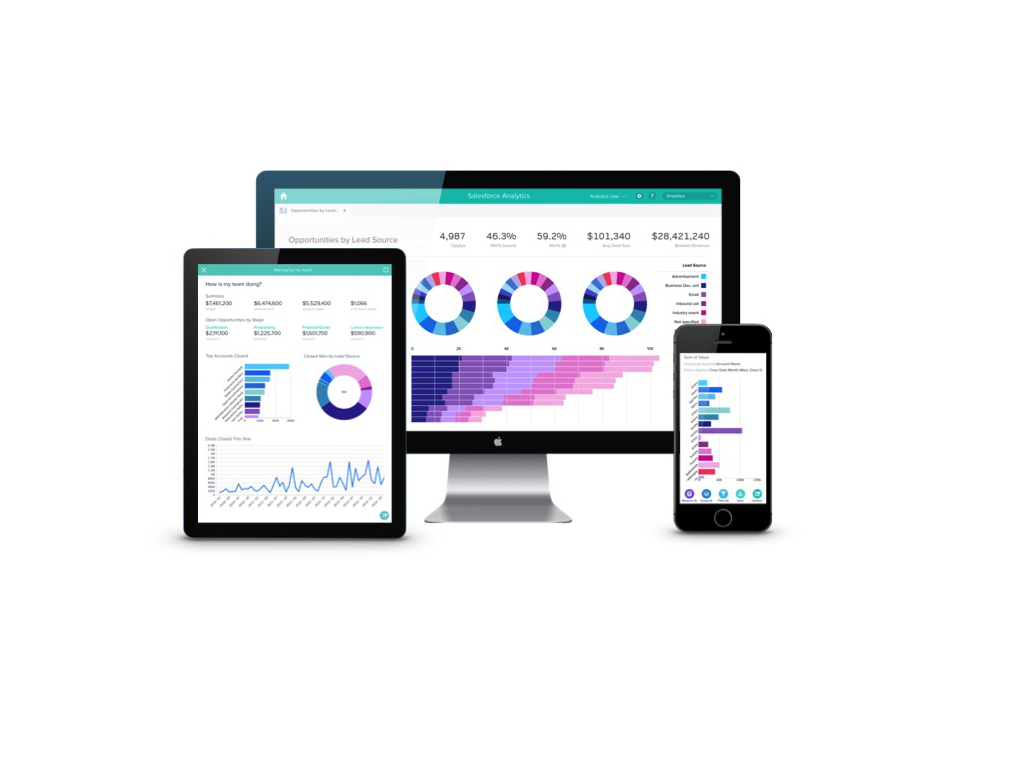 Above: The Salesforce Wave analytics cloud software can run on mobile devices and desktop computers.

Over at Forbes, writer Ben Kepes doesn’t see Wave as a business-intelligence tool. Rather, he thinks of it as “a ‘bottom up’ attempt to make line-of-business workers start thinking about how analytics is applicable to them.” Meanwhile Larry Dignan, whose report on ZDNet includes a few screen shots of Wave in action, writes, “Salesforce has five clouds and Wave represents the sixth. In the years to come, Wave could be the most important of the bunch.”

The choice of partnering rather than baking in predictive capability shows Salesforce doesn’t want to completely turn off its ecosystem of companies that offer to crunch data from Salesforce and assist sales people in figuring out which leads to focus on.

Plenty of companies pay for BI in the cloud. Now they’ll have one more choice. Companies that already run Salesforce might well be compelled to look at Salesforce’s take on BI. It’ll be fascinating to see if Wave ends up becoming a sort of gateway drug, leading companies to buy Wave first and then sign up for Salesforce’s other offerings.