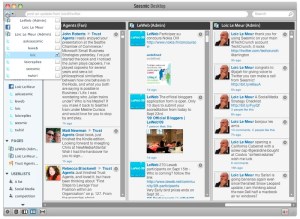 Do you still use Facebook and Twitter by opening facebook.com and twitter.com in a browser? Or, have you tried using a desktop client to organize all the incoming status updates, tweets, comments, and other notifications into one little window on the side of your computer’s screen? Do you hope to find a way to shove all that data out of the way of your work?

My advice: Give up. What you need to do is go the other way and dive deep into your social networks. Let them take over your screen. In marketing-speak: Immerse yourself in your community. In English: Close your browser and fire up a full-screen, highly customizable social network console that lets you login to all your social network accounts at once.

TweetDeck and the Seesmic Desktop are the two most popular social network consoles among the tweet-happy people I’ve polled. Both are based on the same principle: Instead of Twitter’s single column of messages streaming from bottom to top, they encourage users to line up three, four, or ten columns side by side — one for Twitter direct messages, another that searches constantly for #nom tweets about food, another that tracks a Facebook fan page separately from a personal profile page. The trick is to find the optimal spread of different types of incoming social network messages. If the boss pops by, a single click makes the whole array disappear.

In a recent New York Times feature, I wrote:

Doing your social networking inside a browser window is slow, clumsy and prone to losing work in crashes. That is why serious networkers usually install a console application like TweetDeck or Seesmic Desktop.

There is a small war on the Internet over which of these two consoles is the best. The truth is, they both do a lot of the same things. Pick one. What matters is that they are much faster and less crash-prone than loading Facebook and Twitter into your browser. Also, replies and comments appear almost instantaneously, but in a separate, lightweight application instead of your browser. You can ignore the updates until it is time to pay attention.

Ms. Smalley [She’s better known as @comcastbonnie, a 24-year-old Comcast customer service rep who says she types 400 tweets on a slow day. Twitter blocked her once because they thought she was a bot.] organizes her Seesmic desktop by putting the busiest parts of the interface on the left, where she found she could read them faster. She then sorts the other components by how busy they are, parking the most idle of the Seesmic Desktop’s windows on the right, where she can ignore them most of the time. 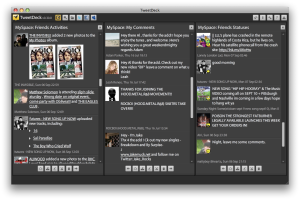 Since I wrote that article, TweetDeck and Seesmic have been adding features faster than I can keep up. A new version of Seesmic released two hours ago brings Facebook Pages into the console, according to an email from Seesmic founder Loic Le Meur:

TweetDeck founder Iain Dodsworth, whom many credit with the idea of sprawling multiple columns of tweets across his computer screen so he could immerse himself in the Twitterverse, also posted an update to his software recently. The new TweetDeck allows users to incorporate MySpace accounts, and includes a browsable directory of recommended Twitter feeds to follow.

Fair warning: These applications have busy, buzz-crazy communities built around the tools themselves. You can follow @loic and @iaindodsworth and watch them race to add support next for — let me guess — LinkedIn job search accounts. First program to sprout an “I Got Fired for Tweeting” button wins.