Shazam, known for its eponymous music recognition app, has launched a new augmented reality (AR) platform for brands, artists, and users around the world.

Founded in 2000, Shazam offers a mobile app that lets you identify songs playing in the background by tapping a button. But it has long since branched out into other verticals, including TV, and the company recently announced its billionth app download overall.

Back in 2015, Shazam announced new visual recognition smarts, moving beyond its audio roots to allow users to scan things like magazines, posters, and packaging that creates what the company refers to as “dynamic pieces of content” — this may include special offers and the ability to buy goods.

Now Shazam is taking things to the next level with AR features that promise to “bring any marketing materials to life,” including advertisements, packaging, and other physical objects, through scanning mini Shazam “codes.” In terms of the kind of content users can unlock through Shazam, well, it could be anything from 3D animations to games and product visualizations. 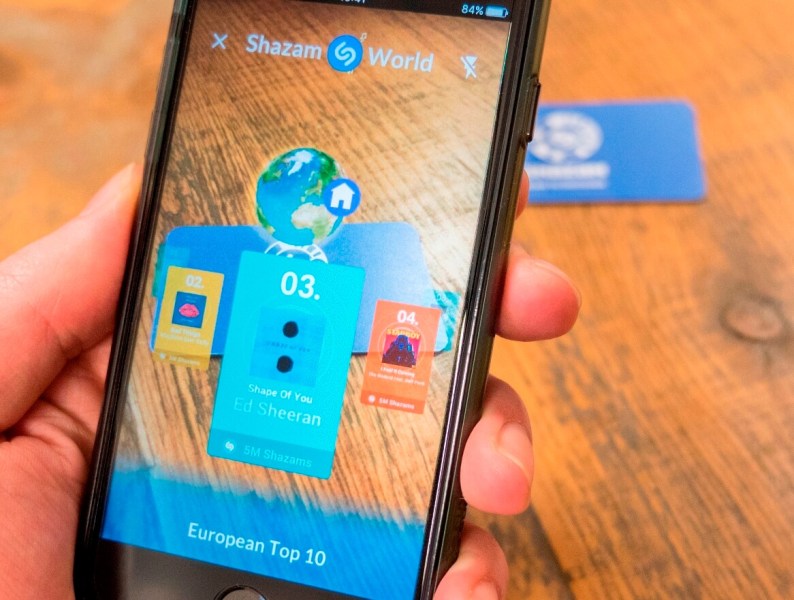 For the launch, Shazam says it has partnered with Beam Suntory, the company behind Jim Beam bourbon, among other alcoholic brands, with U.S. Shazammers able to unlock a branded memory game from next month.

“We knew we were onto something big when we released visual image recognition in 2015,” said Shazam CEO Rich Riley. “With the rapid rise of augmented reality, it is a natural evolution for Shazam to be a first-mover in delivering AR at scale.”

Shazam’s new AR code-scanning technology will be powered by yet another London company, Zappar, which just a couple of weeks ago raised its first outside funding to the tune of $3.75 million.

What Shazam is offering here is, of course, nothing new. Fellow London startup Blippar has been offering something similar for several years, but what Shazam is selling to brands is its existing reach — its app is already used by tens of millions of people globally.

“One of the things missing from augmented reality for advertisers has been a frictionless way to deliver these experiences at scale,” explained Greg Glenday, Shazam’s CRO. “Because Shazam has such a massive install base and consumers are already accustomed to using the app for discovery — we have now solved that problem. The possibilities for a brand to bring their products to life or make their advertising more engaging are quite literally only limited by the imagination.”