Cloud computing’s growth shows no sign of plateauing, and that’s particularly true of segments like ecommerce, retail, transportation, finance, consumer products, enterprise, and health care. Analysts at Gartner anticipate that by 2022 more than 75% of global organizations will be running containerized apps in production, up from fewer than 30% today. According to Data Bridge Market Research, this uptick will drive the global app performance monitoring market from $5.14 billion in 2018 to $12.11 billion by 2026.

That’s no doubt music to the ears of Karthik Rau, previously VP of product management and worldwide marketing at VMware and VP of products and R&D at Delphix. He’s the CEO of San Mateo, California-based SignalFx (previously SignalFuse), the provider of real-time cloud monitoring services for infrastructure and applications that today announced it has raised $75 million in series E financing, bringing its total raised to $179 million. The round, which follows a $45 million series D in May 2018, was led by Tiger Global Management and saw participation from existing investors Andreessen Horowitz, CRV (formerly Charles River Ventures), and General Catalyst.

“The addition of Tiger Global Management to our team comes at an important time for SignalFx,” added Rau, who cofounded SignalFx with former Facebook software architect Phillip Liu in 2013. “The additional capital from this financing allows us to invest even more in our industry-leading products while also extending our go-to-market reach to more organizations around the world.” 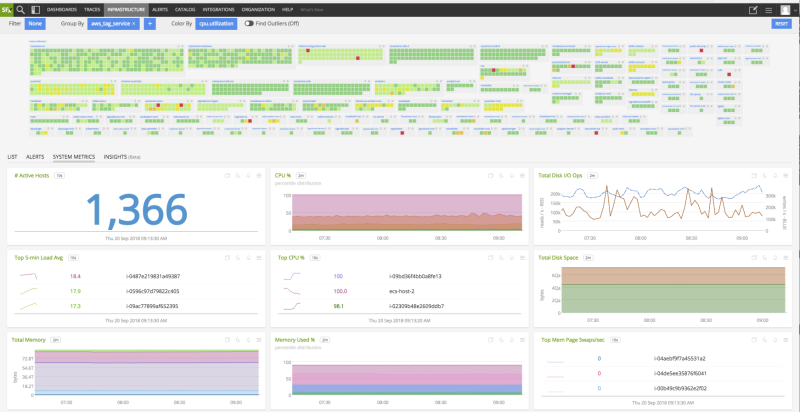 SignalFx — whose founding members included the original developers of Facebook’s metrics-based monitoring solution and veterans of LoudCloud, Opsware, Red Hat, VMWare, PTC, and Sprinklr — taps a low-latency, scalable streaming analytics engine to keep tabs on microservices (collections of loosely coupled, independently deployable app components across clouds) and orchestrated container environments like Kubernetes and Docker, in addition to serverless architectures like AWS Lambda, Azure Functions, and Google Cloud Functions. Its algorithms and portals suss out malicious activity and highlight service-wide issues and trends, all while detecting and optimizing things like cold starts and guiding IT teams through troubleshooting steps to identify the root causes of issues.

So how does it accomplish all that? SignalFx’s vendor-neutral suite automatically discovers all monitored services and their interdependencies in real time and observes the data transactions among them, collecting trace information from widely used open source frameworks and libraries. It uses machine learning algorithms to define anomalies and convert span- and path-level data into metrics, and it leverages an alerting engine that triggers automated remediation with “near-zero” latency and integrates with third-party notification services.

SignalFx claims it’s able to process millions of data points at one-second resolution with less than two seconds of latency, from ingestion to alert.

Customizable dashboards enable operators to create new real-time charts and visualizations and to correlate app and infrastructure stats by viewing them side by side or dynamically grouping them and filtering data by service, cluster, role, team, and other components. SignalFx’s library of architecturally tailored detectors and alert conditions, meanwhile, instantly sets detection thresholds most relevant to a defined set of metrics and services, while its infrastructure navigator tool exposes CPU, memory, disk, network, and alert severity across hosts, virtual machines, and instances in color-coded graphs.

In many respects, it’s much like services offered by Cisco’s AppDynamics, Paris-based Data Dog, and San Francisco-based New Relic and is somewhat akin to those from IT monitoring and alerting companies Boundary, PagerDuty, and ScienceLogic. But Rau asserts that SignalFx’s holistic approach — which analyzes aggregate data as opposed to data from individual components — affords developers greater flexibility than rival solutions.

“SignalFx is at an inflection point in its growth, as organizations are investing aggressively in their cloud and digital transformation initiatives and reevaluating their systems management and monitoring strategies,” he said. “As demand for the SignalFx cloud monitoring service grows, we continue to invest in our international expansion to better serve the needs of our global customers.”

To that end, SignalFx in February announced the opening of an R&D support office in Krakow, Poland and expanded sales operations throughout Europe, the Middle East, Africa, and Australia.