If you’re one of those people who could never get used to Gmail’s method of collapsing email conversations into threads, it’s time to rejoice. Google announced today that it will let you disable Gmail’s Conversation View, which will make emails appear individually — like they do in most other email platforms.

Gmail’s Conversation View was one of the most defining features of the service when Google first introduced it in 2004. Like Gmail’s complete lack of mail folders, its threaded Conversation View helped Google sell the service as an evolutionary step in the way users dealt with email. But some users never warmed up to Google’s utopian email vision and have long demanded the option to turn off threads.

Google Enterprise President Dave Girouard told journalists earlier this year that not offering the choice to remove Gmail conversation threads was the company’s biggest mistake in the enterprise arena. The threads were alien to the way most business users managed their mail, and they likely prevented Google from gaining much ground in the enterprise space. (Of course, the fact that Google listed Gmail as a beta service until the middle of 2009 certainly didn’t help.)

In many ways, Google’s obstinate hold on Gmail’s conversation threads was representative of the company’s early approach to users — its engineers know best, and users just need to adapt to the Google way of doing things. Now after privacy complaints regarding Google’s Buzz social network, the company is treading very carefully with its demands from users — something I consider a sign of maturity. 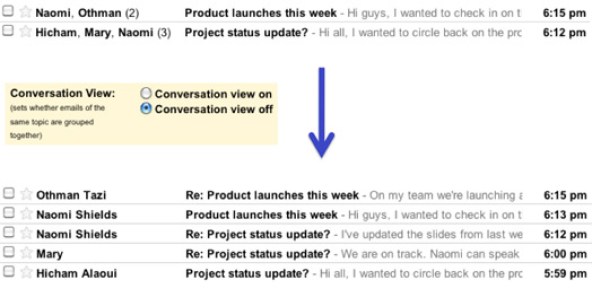