A new report projects that the smart speaker market will continue its torrid growth, with Google and Amazon battling for dominance and Apple stuck in a distant third place.

According to Canalys, the number of smart speakers in use will come close to 100 million by the end of 2018, up from under 50 million at the end of 2017. Canalys predicts the market will more than double again to hit 225 million units by 2020.

Along the way, market leader Amazon will continue to see its market share slip, Canalys says. The firm gives Amazon Echo devices about 50 percent of the installed base in 2018, but by 2022 that is expected to fall to 34 percent. By the same measure, Google’s Home will grow from about 30 percent now to 34 percent in 2022 — pulling the two giants even.

Meanwhile, Apple’s HomePod only claims a 4 percent chunk of smart speakers currently installed, a figure that should grow to about 10 percent by 2022.

Notably, the firm doesn’t break out numbers for speaker company Sonos, which is trying to make a run at this market and just filed for an IPO.

“The rapid growth of the smart speaker installed base is itself a growth driver,” said Canalys Analyst Ben Stanton. “Amazon and Google are desperate to prove the scale and reach of their platforms to developers.” 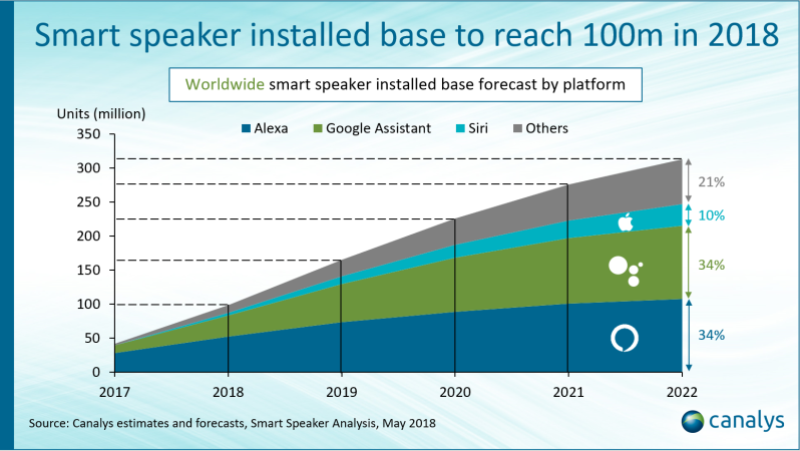 As with other emerging platforms, dominance in the smart speaker category will increasingly revolve around attracting developers, Canalys says. Both Google and Amazon will fight for market share to demonstrate their value and reach to those developers — whose creations will in turn grow the devices’ appeal.

Looming over the horizon, however, is a fierce battle for the Chinese market.

Canalys notes that the U.S. is currently by far the largest market, with 73 percent of all units at the end of 2017. China has only 3 percent.

But by the end of 2018, Canalys expects that the U.S. share will fall to 64 percent, while China increases to 10 percent, a sign of just how rapidly the latter’s market interest is surging. Getting a foothold in China will be critical to Apple, Google, and Amazon, but they will also face intense local competition.

“China is still a nascent market for smart speakers, but it is a sleeping giant,” said Canalys Research Analyst Hattie He, in a statement. “Local players, such as Alibaba and Xiaomi, are investing heavily … China has massive potential, with more than 450 million households, over 3 times the number in the U.S.”