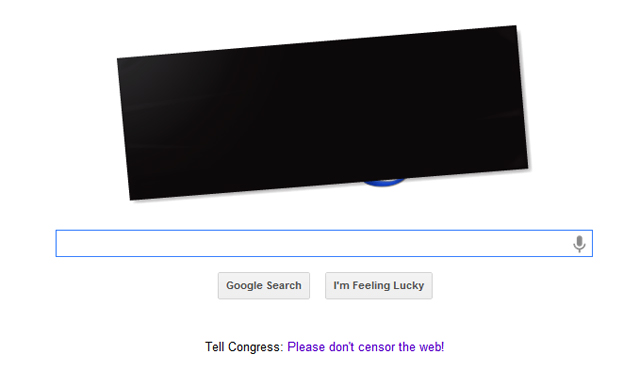 A handful of U.S. websites have decided to go dark today in protest of the Stop Online Piracy Act as well as its senate cousin the Protect IP Act — two piece of proposed legislation aimed at curbing piracy efforts abroad.

Perhaps the most vocal protester of the bunch is search engine giant Google, which has decided to update its homepage with  a large sideways black box over the company’s logo. Since the site prides itself on staying very minimal, the logo is basically the most dominant visual element on its search homepage at any given time — meaning it’ll be difficult for the majority of U.S. web users to avoid observing the protest if nothing else.

The Google homepage also features a link to an anti-SOPA/PIPA infographic and a form that allows you to sign a formal petition against the bill. Google writes:

Fighting online piracy is important. The most effective way to shut down pirate websites is through targeted legislation that cuts off their funding. There’s no need to make American social networks, blogs and search engines censor the Internet or undermine the existing laws that have enabled the Web to thrive, creating millions of U.S. jobs. Too much is at stake – please vote NO on PIPA and SOPA.

To summarize, both SOPA and PIPA would give the U.S. government and copyright holders the authority to seek court orders against foreign-operated websites associated with infringing, pirating or counterfeiting intellectual property. If it becomes law, it could drastically change the way the Internet operates. For example, if a website is accused of containing copyright-infringing content, the site could be blocked by ISPs, de-indexed from search engines and even prevented from doing business online with services like PayPal.

In addition to Google, several other staples of the web have also joined in the SOPA protest, including Wikipedia, Mozilla, WordPress, BoingBoing.net, The Huffington Post and many more. Some organizations, such as Reddit and the Cheezburger Network of sites, have chosen to begin their protests or blackouts at 8 a.m. EST tomorrow.

We’ve included a gallery of screenshots below displaying protest messages from several sites. Since it’s only 1 a.m. on the east coast, I’d expect we’ll end up updating this page with more screenshots throughout the day.

Update 11:39 a.m. EST: Added a few more screenshots. It’s worth noting that the screenshot below from popular web comic The Oatmeal doesn’t properly portray the full extent of the blackout message. Artist Matthew Inman has created a hilarious narrative animated gif image that manages to include goats, Oprah, Jesus, Jet skis and (of course) SOPA.