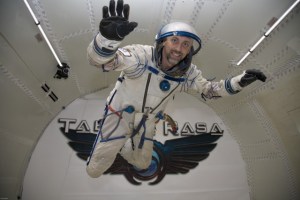 Richard Garriott is one of the most famous game designers on the planet and he has been inducted into just about every gamer Hall of Fame. Now he wants to be famous off-planet.

At a personal cost of more than $30 million, the game designer has signed up with Space Adventures (in which he’s an investor) to be shot into space on October 12 on a Russian Soyuz rocket. And while he’s up there, logging days at the International Space Station, he’ll leave a few mementos from his latest game.

Garriott is the creator of famous fantasy/sci-fi role-playing games from “Ultima” to “Tabula Rasa.” The latter game, which he spent six years making, needs some extra help getting off the ground. It launched last fall but still needs to get a lot more players to be a profitable enterprise. So Garriott is going to unify his off-world extracurricular space trip with the game’s marketing plan.

He’s calling his shot into space “Operation Immortality.” It ties into the story of Tabula Rasa, the massively multiplayer online game that launched in November and has subscribers reportedly in the tens of thousands — somewhat of a failure in the world of big games. (NCSoft, Garriott’s employer, doesn’t disclose exact numbers, and Garriott acknowledges it was a tough launch). The sci-fi game has good graphics and an epic story, but gamers have so many choices now and it didn’t stand out during the holidays. It also debuted at a time when many hardcore gamers were obssesed with the console hits, “Call of Duty 4” and “Halo 3.” The game scored an average 79 percent rating on Gamerankings.com. GameSpot’s review said the game was strong on action, but it was visually weak, buggy, and the worst criticism: it didn’t stand out enough from other sci-fi games. 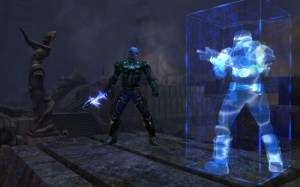 In Tabula Rasa, Earth bites the dust in a few years as a result of an invasion by a race of aliens called “The Bane.” A small group of survivors live on to fight. Garriott is taking with him a bunch of artifacts related to the game. He will leave a time capsule of these artifacts aboard the International Space Station to preserve it for posterity. This includes the player roster data from the game, as well as a list of humanity’s greatest achievements and the DNA of 40 or so players. The company will hold a contest and send the winners a DNA kit so they can donate a swab of their own genetic material.

That will be sent to a gene-sequencing lab, which will send it up in digital form (inside a so-called “immortality drive,” which relates to the storyline) along with Garriott as he visits space. It’s like a half-serious backup copy of the genetic code for people, in case the human race gets destroyed as in the Tabula Rasa plot. (No, Garriott isn’t kidding about taking this DNA up into space).

“It’s one of those just-in-case Tabula Rasa comes true and we have to rebuild humanity from scratch,” he said. “It’s like the fans get to come along for the ride.” 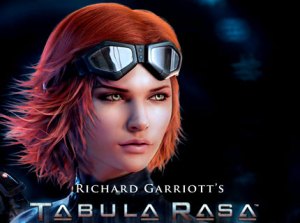 The game developers have also created a series of missions inside the virtual world of Tabula Rasa to coordinate with the real-life plans of Garriott, who is known inside the game as “General British.” Garriott has a chance every day to communicate back to gamers.

The game has sucked in some gargantuan developer resources since 2001. It underwent a major overhaul two years into the project, resulting in a quarter of the team being replaced and a redo of most of the code. Many players are dedicated to other games such as Activision Blizzard’s “World of Warcraft,” which has more than 10 million subscribers.

Now you might consider this to be a crazy publicity stunt. But Garriott, who once threw humongous Halloween parties to promote his Ultima games, is no stranger to wackiness. The company won’t be paying a dime of his expenses. But to Garriott, the trip is worth it. He is the son of Owen Garriott, an astronaut, and he has been waiting to follow in his father’s footsteps for a very long time. He spent half the year training in Russia at the cosmonaut training center outside of Moscow. He will train at NASA in Houston as well. 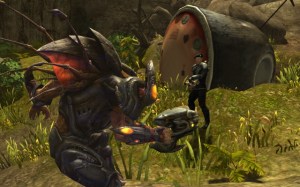 His own interest in space and the creation of Space Adventures predates the story of Tabula Rasa. Garriott was slated to be first to go up into space on a privately-funded trip but the bursting of the Internet bubble caused a setback. Garriott sold his slot. Dennis Tito bought the slot and was the first to take a privately funded space flight in 2001. Garriott will be the sixth private astronaut, or cosmonaut.

“I’ve been trying to get into space since about 1985,” he said. “It’s a safe bet that I’ll be the first hardcore gamer in space. We wouldn’t want to let that opportunity pass by.”

It goes without saying that Garriott is nuts. I’m not sure this trick is going to goose Tabula Rasa’s numbers, but it can’t hurt. And he wants your DNA. If this were all an April Fool’s joke, we’d have a good laugh. But this is the video game industry. I’m accustomed to wacky people and wacky marketing schemes.