Spansion says it can eliminate the need to put a battery in the tiny sensors that will deliver the measurements from the Internet of things.” That should make it much more affordable to deploy billions of such sensors.

The new solution uses chips that can harvest their own energy from the sun, vibration, or heat. By getting rid of the battery, such chips will be much greener and will lower the maintenance costs significantly for companies that deploy networks of sensors for Internet of things applications. They will make wearable electronics and wireless sensor networks more practical, Tom Sparkman, senior vice president of Spansion’s Analog Business Unit, told VentureBeat in an interview.

“We can use this technology to eliminate barriers, lower the barrier for installation, and fuel a greener Internet of things,” he said. “We think there is industrial and consumer demand for the Internet of things. But the adoption rate may be slowed by the operating expense of having so many senses out there.”

Spansion’s chips include a family of power management integrated circuits that can capture and store energy from ambient sources. Those include solar, piezoelectric (vibration), and temperature changes (Peltier). It could also use energy from electromagnetic induction. Since these chips don’t need much power to operate, they could last anywhere from a decade to 30 years, perhaps even more, Sparkman said.

“These ideas have been out there for less than a year, as we all realize that batteries are part of the problem,” Sparkman said.

In the Internet of things, the idea is to put an Internet-connected sensor on just about everything so that you can get moisture reports from every part of a grape vineyard or vibration reports on every piece of machinery on a cargo ship. These sensors could send data that could prompt maintenance operations to fix some very big problems from developing. The Spansion chips can tap natural, renewable resources.

But if each one of those sensors has to have a battery and you have to replace 20 percent of those batteries every year, then the cost of maintenance for a building that cost $500,000 to outfit with sensors could be $100,000 or $200,000 a year. That’s cost prohibitive. On top of that, the batteries are not eco-friendly and have to be disposed of. Without the batteries, the devices could be completely hermetically sealed, making them more reliable. And the devices would likely be comparable in costs to those with built-in batteries, Sparkman said.

“Your reliability will go way up by using these instead of batteries,” he said. “It may be slightly more expensive than batteries, but it’s much cheaper than buying a lifetime of batteries.”

The idea percolated from the analog-and-microcontroller chip division at Fujitsu, which Spansion acquired last year. The Spansion power management chips would be coupled with its microcontroller units. The chips are available now. One chip, the MB39C811, combines energy harvesting for solar and vibration, while a different chip, the MB39C831, harvests energy from solar and thermal sources. 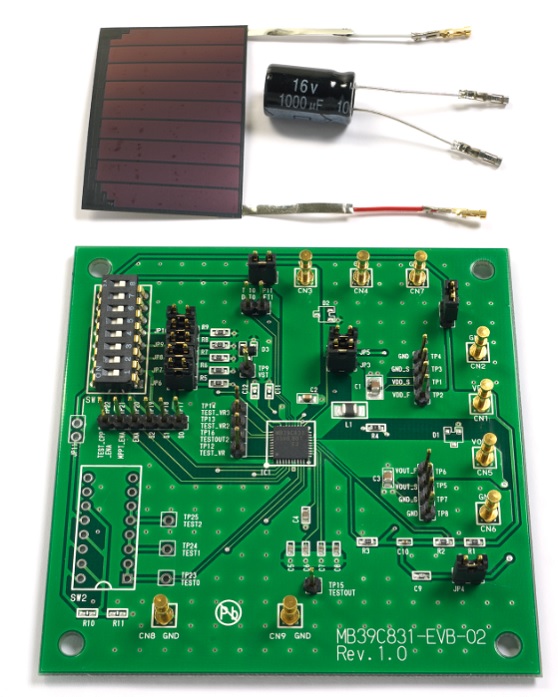