Tinder has revealed the next step in its mission to help users meet their perfect match, as Spotify opens up its catalog of songs to the perennially popular dating app.

Launched in 2012, Tinder has become the de facto hook-up app for many, claiming tens of millions of users around the world. Before now, Tinder could suggest matches based on users’ manual swiping preferences or based on mutual Facebook friends and shared interests. From today, Tinder users will also be able to indicate their favorite songs and artists from Spotify’s gargantuan library of tunes.

Anyone — regardless of whether they’re Spotify users or not — can search Spotify from within the Tinder app to find their favorite song and pin it to their profile for all to see. But those who connect their Spotify account can select which of their top artists to display on their profile, and thus see what artists they have in common with each potential match.

More than that, visitors to a profile page will also be able to play previews from the tracks directly within Tinder. 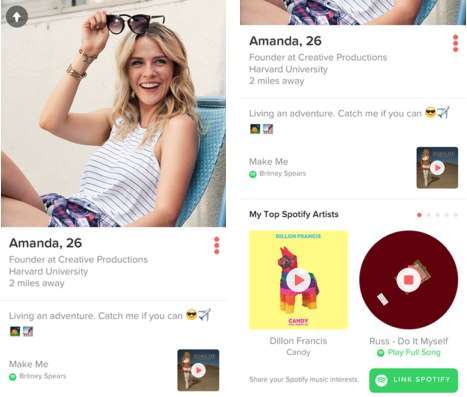 “If two Spotify-connected users come across each other, it will start surfacing the number of tracks the users have in common,” explained Spotify’s Brendan O’Driscoll — who joined the music-streaming giant when it acquired his startup Soundwave back in January — in an interview with VentureBeat. “Just building on the existing functionality of surfacing how many friends they have in common, we’ll have the ability to let you know if you have matches not just for mutual friends but for mutual artists. That will be a conversation starter.”

It’s an interesting addition to Tinder’s bag of tricks, because music is something that people often bond over. But it could be better if it was able to match users automatically based on a certain percentage of shared music listening, rather than it merely serving as an additional metric upon which users can judge potential dates.

It’s worth noting here that what Tinder is doing isn’t entirely without precedent — London-based startup Tastebuds has made a name for itself as a social network and dating app that connects people through shared tastes in music. And O’Driscoll’s own Soundwave built a social network around connecting music fans.

For Spotify, which just announced that it now has 40 million paying subscribers, integrating with Tinder also gives it one more avenue to gain mindshare and lure new (paying) users on board. It’s pretty much a win-win tie-up for all concerned.

“We believe your music, which lives on Spotify, is also super powerful outside of Spotify,” added O’Driscoll. “Not every Tinder user is a Spotify user, so a whole bunch of new people will start to interact with Spotify content, and gradually get to know and use and like Spotify. [But] it isn’t just for acquiring new users. It’s for existing users as well.”