Stack Overflow today launched Stack Overflow for Teams, a new private section on the public website for developers looking for answers to work-specific questions. In addition to accessing the public content on stackoverflow.com, developers can use the platform internally, powered by the knowledge of colleagues and peers.

Stack Overflow is best known as a question-and-answer site for computer programmers. The company also offers Stack Overflow Enterprise, but that version is only used by a couple dozen large companies (such as Bloomberg and Microsoft) across “hundreds of thousands of developers.” Stack Overflow for Teams is meant for teams of all sizes — Stack Overflow suggests groups of five to 500 people, but those are not strict limits — you can certainly sign up fewer or more members if you like.

Stack Overflow for Teams costs $10 per month for up to 10 users, with each additional user costing $5 per month (or $50 per year). For reference, Stack Overflow Enterprise costs around $200 per user per year, although the use case there is different. That version is typically hosted on premises or on an enterprise’s cloud, is accessible via a different URL, and is separate from stackoverflow.com (it doesn’t include any of the public content).

Developers can access Stack Overflow for Teams right on stackoverflow.com, which is now divided into Public and Teams sections: 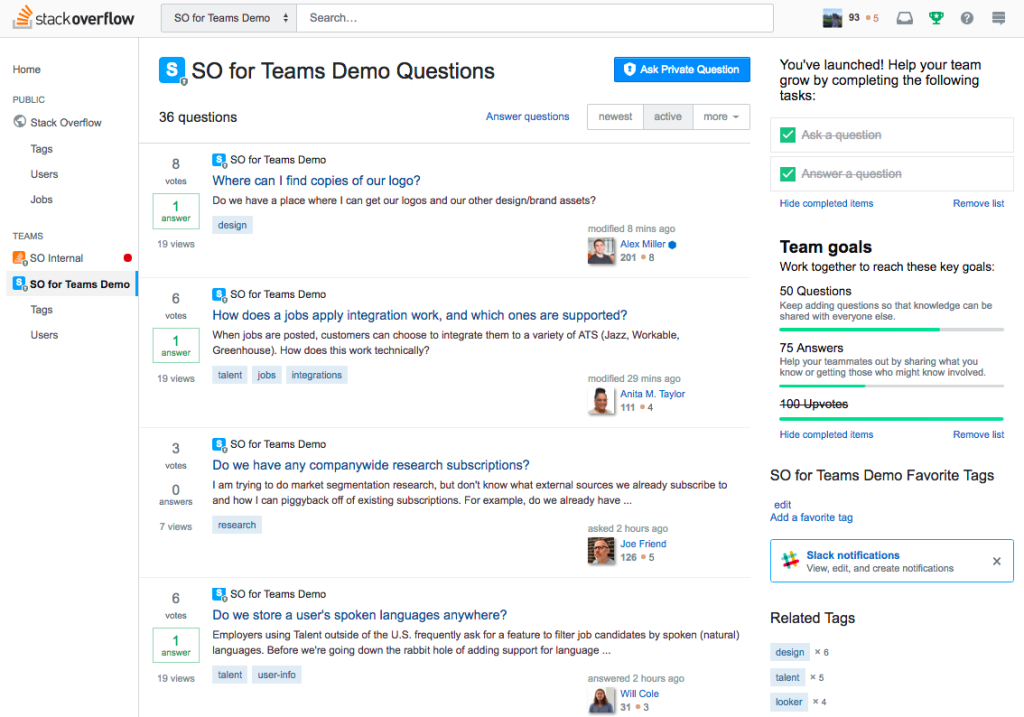 “Up until now, Stack Overflow has been a single website, publicly available worldwide with millions of questions that didn’t really give developers a way to ask private or proprietary questions of the members of their own team,” CEO Joel Spolsky told VentureBeat. “That’s what we’re changing. You go to stackoverflow.com/teams, sign up, and create a private team for your organization. And then any questions, which are directed to the team, go into a separate, secure database, and are only visible to your team.”

Unlike the Enterprise version, Teams has the potential for a lot more usage. Developers regularly visit stackoverflow.com as they work, so the hope is that they will be reminded about Teams and answer the questions their colleagues are posing.

The main Stack Overflow features are as follows:

Slack is the only integration available at launch, Spolsky clarified. He hinted, however, that more integrations aren’t out of the question. There’s also a public API so anyone can build integrations with Stack Overflow for Teams. 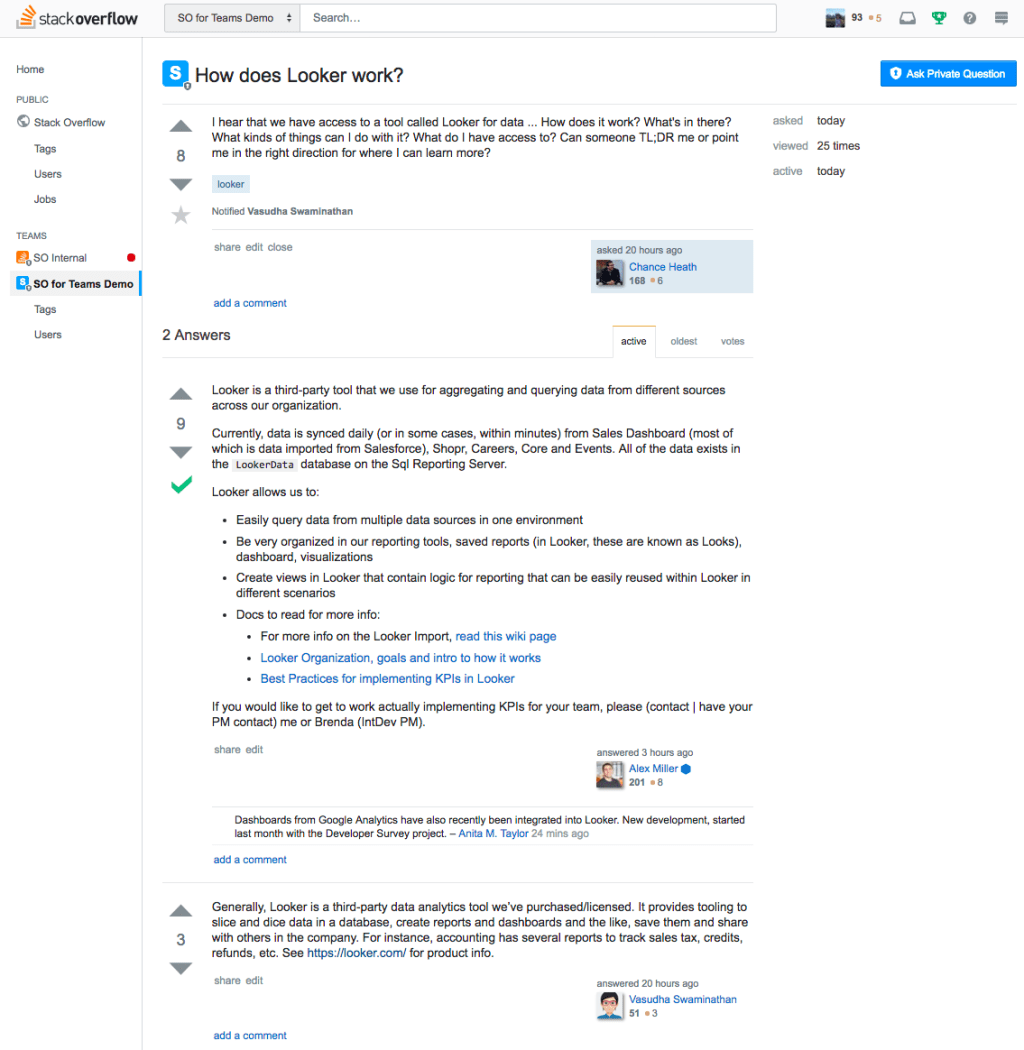 “Every time I meet developers, they tell me that they use Stack Overflow. But a lot of them have never had to ask a question on Stack Overflow, because the answer is just always there,” Spolsky told VentureBeat. “One of the nice things about Stack Overflow for Teams is that now anyone can ask questions about their proprietary codebase or their internal stuff. Or they can even ask questions that they didn’t want to ask in front of the entire world, but in front of their small team of the people that they work with, they’re happy to ask. So I think it will help a lot of more people get the benefits of Stack Overflow, because everybody can use it for all of their coding problems, but also because it reduces the inhibitions of asking a question when you’re asking it on your team.”

Stack Overflow for Teams is competing with internal wikis and documentation, which can quickly become outdated, and is meant to work in tandem with messaging platforms, which aren’t great for surfacing information. Stack Overflow’s Q&A format is searchable, crowd-sourced, and editable. One could argue that documentation and wikis have similar traits, but they are usually written artificially from start to finish, as opposed to when a specific request for information is made. Stack Overflow also has the advantage of being a platform that developers not only trust, but regularly use.

Still, Stack Overflow is free and already has plenty of content. Stack Overflow for Teams can get pretty expensive, and all the private content has yet to be created.

The work doesn’t stop here — Spolsky shared a few new features that are already on the way. Stack Overflow Enterprise customers will soon be able to divide their users into teams so that different divisions can keep proprietary information separate from each other. Stack Overflow for Teams will also soon have a public version for use by open source projects and nonprofits that are happy to work in the open.