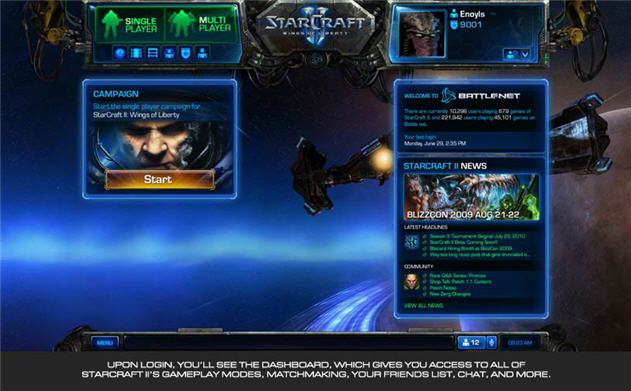 Blizzard Entertainment delayed its mammoth game, Starcraft II, until next year because the online game service that goes with it, Battle.net, needed an upgrade.

Today at Blizzcon, the company’s annual event for the Blizzard fans, the company did its best to explain that Battle.net is undergoing a major overhaul. The service has 12 million members who play older games such as the original Starcraft and Diablo II on it. But it hasn’t been overhauled since 2003. That means it has to be remade for the age of social networking.

The original Starcraft launched in 1998 and has sold more than 11 million copies. The company has been working on a sequel for some time, but the enormous success of World of Warcraft diverted the company’s resources away from Starcraft II for a time.

Blizzard vice president of design Rob Pardo described the upgrades. Above all, Battle.net has to be reliable. Starcraft II is going to be a demanding strategy game, where players furiously click with their mice to maneuver dozens of military units in real time. The simultaneous game play can’t have any glitches, even though players might be playing across continents over the Internet.

Pardo said the service will have persistent character profiles. Every time you log in, you will see your same characters. Users sign in as they launch the game and then decide whether to jump into a single-player campaign, view news, or play multiplayer.

In the single-player game, players can still be connected to their list of friends and access stats, achievements, and their history of player matches. You can watch replays and rewind them — a feature that Halo 3 introduced in 2007 to great success. When you win achievements, you can unlock decorations for your player avatars and decals you can use on units inside the game. You can also go directly to the Starcraft Marketplace and make purchases or upload your own user-generated content such as new battle maps.

The Battle.net servers will also do a better job of sorting players into different skill groups. That way, veterans won’t be slaughtering newbies on a regular basis.

While Starcraft players have been segregated from others in the original Battle.net, now Blizzard’s fans can all congregate as a group. Those who play World of Warcraft, Starcraft II, or the upcoming Diablo III will be able to see their friends across games and chat with them.

Privacy and parental control options will be built into the system. You can control exactly how much other players can learn about you. And you will have a persistent identity, dubbed RealID, that allows Blizzard to monitor player behavior and lets users authenticate themselves.

So basically Blizzard is building features that make even the single-player or multiplayer versions of games more like massively multiplayer online games. That will create barriers to entry for other game publishers that don’t do the same. In that respect, it’s probably well worth it to get Battle.net right before the release of the next major Blizzard game. Here’s a video of a demonstration of Battle.net.