Startup Genome has reported that 41% of global startups have less than three months’ worth of cash available. That’s one of the grim statistics of the pandemic, and it suggests the startup ecosystem is fragile.

The report was based on a survey conducted by the Startup Genome, which interviewed 1,070 respondents across 50 countries from March 25 to April 17. Startup Genome CEO J.F. Gauthier and chief innovation officer Arnobio Morelix wrote the report.

Above: Startup Genome survey says fundings are slowing down.

The survey found 41% of startups globally are threatened — in what the report called the “red zone” — with only up to three months’ worth of cash runway left. Many very young startups have only a few months’ worth of cash — 29% were already in that situation before the crisis — but the pandemic put 40% more of them into that precarious position.

Focusing on startups that have raised series A, B, or later rounds, 34% have less than six months’ worth of cash — a danger zone in the current situation, as fundraising has become more difficult.

Of startups that had a term sheet before the onset of the crisis, nearly 20% have had the term sheet pulled by the investor and 53% have seen the process slow down significantly or have faced an unresponsive lead investor. Only 28% have had the process continue normally or secured the funds. 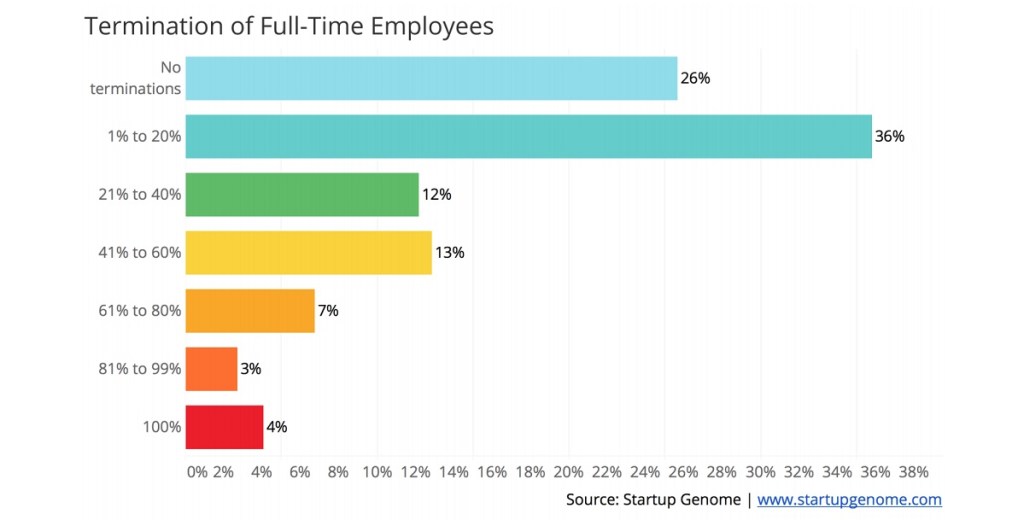 Above: Startup Genome says most startups are cutting jobs.

Since the beginning of the crisis, 74% of startups have had to terminate full-time employees, while 39% of all startups have had to lay off 20% or more of their staff and 26% have had to let go of 60% of employees or more. When the share of startups that had to terminate full-time employees is broken down by the top three continents for startup activity, North America has the biggest share of companies reducing headcount (84%), followed by Europe (67%) and Asia (59%).

Meanwhile, 74% of startups have seen their revenues decline since the beginning of the crisis. The most common type of change in revenue is a relatively modest decline. However, a sizable share of companies were very heavily hit: 16% of startups saw their revenue drop by more than 80%. A major reason for the drops in revenue is the effect of the crisis on industries those startups serve. Three out of every four startups work in industries severely affected by the COVID-19 pandemic. 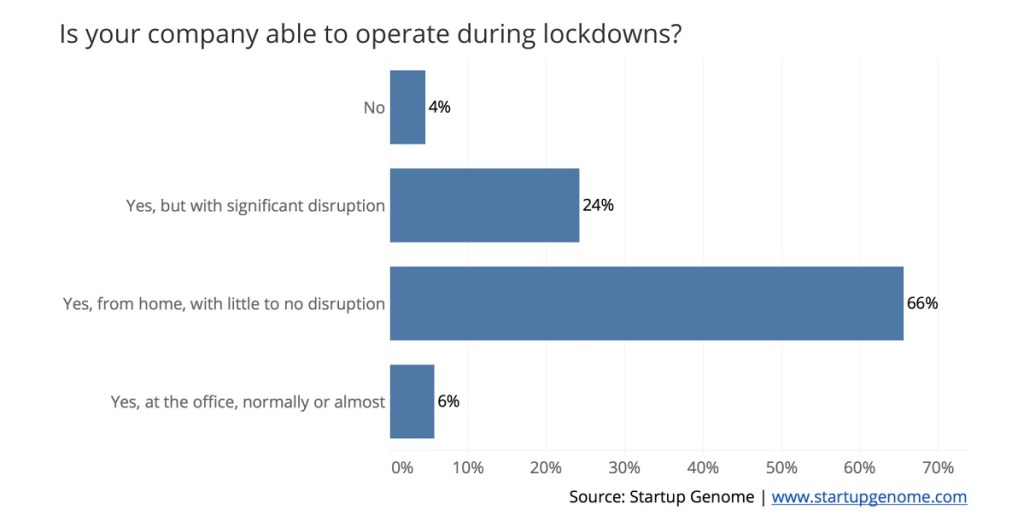 Above: Startup Genome says most companies can still operate in the pandemic.

At the same time, a small minority of companies are actually experiencing growth. In fact, 12% of startups have seen their revenue increase by 10% or more since the beginning of the crisis, and one out of every 10 startups is in an industry that’s actually experiencing growth. Indeed, every crisis creates opportunities. For instance, over half of Fortune 500 companies started during a contraction, and over 50 unicorns were created during the Great Recession alone, as Startup Genome data shows. The COVID-19 crisis will likely prove no exception. 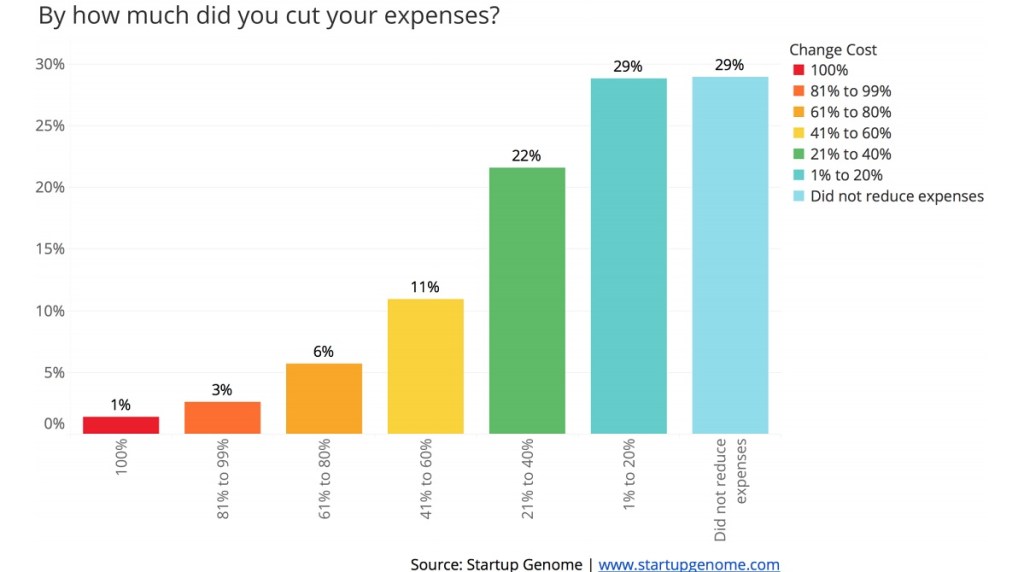 Above: Startups are slashing expenses.

Over two-thirds of startups have reduced their expenses since December 2019, with the lion’s share of those making relatively small cuts. Some companies, however, cut costs very aggressively, with more than one out of every 10 companies cutting costs by over 60%. Out of those startups cutting costs, 76% have started making cuts since the beginning of March — indicating that most of the cost-cutting is directly related to the pandemic.

Nonetheless, tech startups are uniquely situated to continue operating even in lockdown scenarios. Unlike many traditional businesses, 96% of startups responded that they have continued working during the crisis, even if they are experiencing significant disruption. 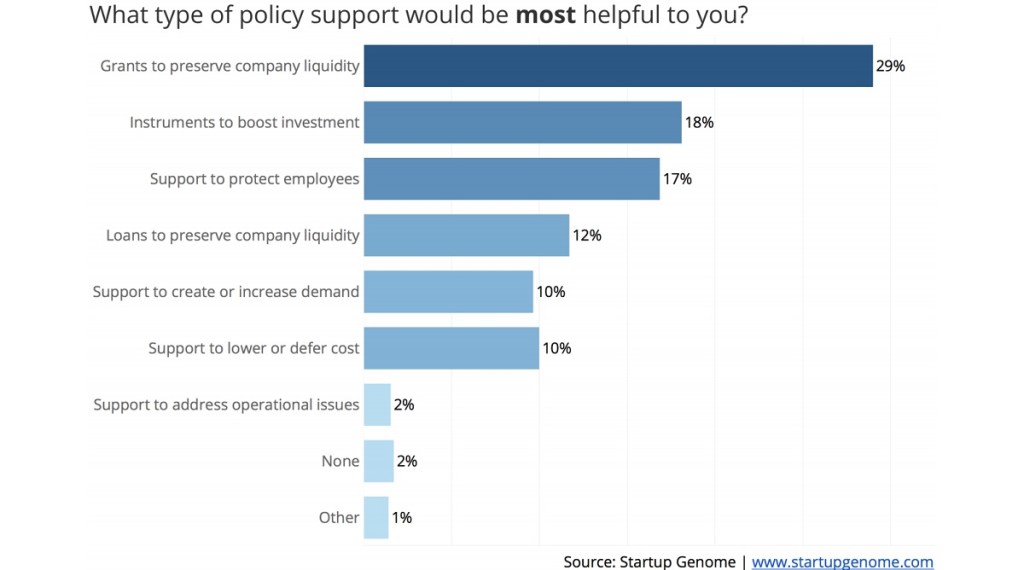 Executives say the top four most helpful policy responses for their businesses would be: