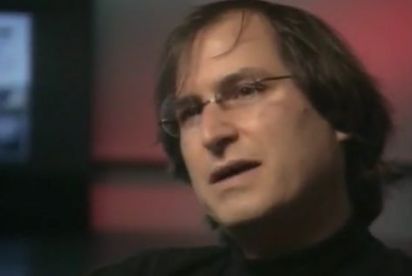 It’s like something out of a thriller: A long-lost glimpse of an industry genius is found buried in a garage shortly after his death.

That’s the story behind “Steve Jobs: The Lost Interview,” an extended cut of an interview with Jobs by tech journalist Robert Cringely for the 1995 PBS special “Triumph of the Nerds.” Master tapes of the interview were lost in the 90s during shipment from London to the U.S., but months ago Triumph director Paul Sen discovered an unedited VHS copy in his garage.

And it’s a good thing that he did. While the 70-minute interview (only 10 minutes was used in the original special) offers little new information not already found in Jobs’ biography and elsewhere, it gives us a rare glimpse at the Apple founder’s business acumen straight from his own mouth. And, inevitably, it makes Jobs’ passing all the more bittersweet.

The film will screen at Landmark theaters on November 16, and will also be available via on-demand video.

In the early copy of the documentary I saw, Cringely introduces the film, but otherwise the “Lost Interview” consists entirely of his conversation with Jobs. And after seeing his slowly deteriorating health over the past few years, it’s a bit jarring to see the vibrant, longer-haired Jobs’ detailing the history of Apple and his thoughts on the future of computing.

Looking past things Jobs already discussed on “Triumph of the Nerds,” one of the first new topics that struck me was his relationship with money, and what that tells us about his dedication to Apple:

It wasn’t that important, because I never did it for the money … I think money is a wonderful thing because it enables you to do things, enables you to invest in ideas that don’t have a short term payback and things like that … But, especially at that point in my life, it was not the most important thing. The most important thing was the company, the people, the products that we were making, what we were going to enable people to do with these products … I didn’t think about it a great deal … I never sold any stock — I really believed the company would do very well over the long term.

For Jobs, who was worth over $100 million by age 25, his devotion to Apple and its products is something every budding entrepreneur should take note of.

The documentary continually offers up this sort of non-stop insight. For example, Jobs discusses how always asking “Why?” helped him learn to do business. While learning about the accounting practice of standard cost in the run-up to the Macintosh, wherein accountants would establish an estimated price for a product and adjust it later to fit real-world costs, Jobs asked why things were handled that way. “And the answer was, that’s just the way it’s done,” he said. Jobs ended up creating system in the Macintosh factory that made it easy to track actual costs.

When came to managing a solid team of people, Jobs likened it to polishing rough stones and transforming them into something beautiful: “It’s through the team, through that group of incredibly talented people, bumping up against each other, having arguments, having fights sometimes, making some noise, and working together they polish each other, and they polish the ideas,” he said. “And what comes out are these really beautiful stones.”

Not surprisingly, Jobs was also a big believer in the power of the web in 1995 (notably, a year before Apple announced it would purchase NeXT, his company at the time). When asked by Cringely about what excited him most about the next decade of technology, Jobs said:

Well, I think the Internet and the web — there are two exciting things happening in software and computing today. The web is incredibly exciting because it is the fulfillment of a lot of our dreams that the computer would ultimately not be primarily a device for computation, but metamorphosize into a device for communication. With the web that’s finally happening.

Secondly, its exciting because Microsoft doesn’t own it, therefore there’s a tremendous amount of innovation happening. I think the web is going to be profound in what it does to our society. As you know, about 15 percent of goods and services in the U.S. are sold via catalogs or television, all this is going to go on the web or more. Billions and billions, soon tens of billions of dollars of goods and services will be sold on the web.

Fittingly, Jobs also accurately predicted just how much the Internet would reshape society: “I think the web as we look back ten years from now, the web is going to be the defining technology … the defining social moment for computing,” he said.