More than four years after Steve Jobs’ death, his widow is on track to win approval from town officials in Woodside to build a luxurious new homestead on land that was previously the site of the historic Jackling Home.

Jobs himself spent more than seven years fighting legal battles with local preservation groups before finally tearing down the 17,250-square-foot mansion in February 2011. But during that controversy, and in the years since he died of pancreatic cancer in October 2011, no official plans were ever submitted to build a new home to replace the old 14-room structure.

Laurene Powell Jobs has proposed building a new estate that would total 15,689 square feet. The proposal for the land, which Steve Jobs originally bought in 1984, would not just include a sumptuous new residence, but would create an agricultural wonderland where the family would be able to raise livestock, press olive oil, make wine, and plant a large vegetable garden.

While smaller than the Jackling footprint, the ambitious yet rustic new complex would be a stark contrast to the relatively modest 5,768-square-foot house in Palo Alto where the Jobs family lived together since the mid-1990s.

Though large, the total size remains 10 percent under the total square feet allowed on the property. And with most structures just one story high, the new estate seems designed to blend in with the trees that cover the property.

The permit process is being overseen by Ken Morrison of the Rockridge Group, a construction management firm based in Oakland. In an email, Morrison said he was not able to comment on the project.

A representative for Powell Jobs said she did not wish to comment publicly on the project.

The start of any actual construction is still many months away. However, the town’s Architectural Review Board “applauded the applicant for proposing a project that is strongly in alignment with Residential Design Guidelines in that it is restrained, elegant, limited in intensity, subordinate to the land, and sits lightly on the land.”

The proposed project would also be situated in one of Silicon Valley’s most exclusive environs. With a population of just 5,287 but a median family income of $246,042, Woodside is among the nation’s wealthiest communities. SoftBank CEO Masayoshi Son, Sun Microsystems cofounder Andy Bechtolsheim, Intuit cofounder Scott Cook, and Oracle CEO Larry Ellison also own expansive properties not far from the Jobs family’s land.

While the official proposal includes about 100 architectural renderings that show the proposed estate from a wide variety of perspectives, Woodside officials said they are not allowed to put them online or let people to make copies because the renderings are copyrighted by the architectural firm that designed the homestead, Olson Kundig of Seattle.

Representatives of Olson Kundig did not respond to a request for comment. However, a VentureBeat reporter visited the Woodside town hall to view the renderings.

The architect’s drawings have a clear theme: blurring the line between the interior and exterior spaces.

The buildings on the 9-acre estate will be surrounded by gardens and large heritage oak trees. There are fences encircling some of the gardens, but only to keep out marauding critters.

The main residence is a neatly organized one-story structure in the shape of the letter L. The facility doesn’t have a clear front door. Instead, much of the exterior of each side of the building will be made of horizontally sliding glass doors. As a result, people will be able to come and go freely when the glass doors have been automatically recessed.

An extended living room takes up the longest part of the L-shaped building. Above it, there’s a “green” roof. On the other side of the area where the glass walls can be stored, there will be bookshelves.

The short side of the L-shaped house — its roof features a solar array — will have areas for a kitchen, a dining room, and a sleeping area, in that order. At the junction of the two parts of the L shape is a hallway leading to two bathrooms. To get from the bathroom area to the living room, people will walk through a breezeway flanked with wooden, patterned walls that can slide back.

A pool is located just outside the house, closest to the dining area, and a wooden deck surrounds the pool. Nearby, there are three cabanas with trellis roofs, along with a sauna, a changing room, a hot tub, and a cold plunge.

And a few steps away from the house, there’s a yoga studio. The east and west walls will be made of horizontally sliding glass doors. The north and south walls will be guillotine windows — glass structures that slowly slide down and reveal the outside.

In general, the estate will be well-hidden from public view, set far back from the main roads and surrounded by old-growth trees, to ensure maximum privacy. But there will still be layers of privacy within that privacy.

For instance, a large basement under the house allows residents and visitors to access the nearby yoga studio underground.

The two guesthouses will also offer a measure of privacy, as they are situated on the opposite side of the lot from the main residence. The Vineyard House has two bedrooms and two bathrooms, while the Orchard House has a single bedroom and a single bathroom. And just to dazzle: The bedrooms have retractable roofs, there are outdoor showers, and there is some kind of indoor reflecting pool.

The rest of the new development will allow the Jobs family to establish a mini farming oasis in the middle of the world’s technology capital.

The southwest section of the property already has a vegetable garden and chicken coop and beekeeping facilities. In the northern part, there is a “grove of large olive trees” that were recently planted, according to town documents.

These modest starts will dramatically expand with the addition of the Garden Barn building, which will contain areas for a greenhouse, livestock, harvest storage, and a pantry. A few steps away is an olive press building for making olive oil. And just beyond that is a wine press building for extracting juice from the grapes harvested on the estate’s vineyard.

Other tech luminaries have branched out into winemaking, as well, including Cypress Semiconductor founder TJ Rodgers, who runs Clos de la Tech in the Santa Cruz Mountains, and former AOL CEO Barry Schuler, who founded Meteor Vineyard in Napa.

The agricultural buildings will be connected by a network of basements that can accessed by an elevator in the greenhouse. On the other side of the garden, the Garden Shed offers plenty of open storage, a powder room, and a hobby area.

Across the estate, many of the structures will be covered on the outside with “natural limestone cladding” to give the buildings a “sandy beige” color. Structural steel will be wrapped in red-stained wood.

In addition to the solar panels, there is a heavy emphasis on environmentally friendly design, with a goal of making the house close to zero-emission. There are rain water catch basins and recycled and reclaimed materials are being used for building. And a geothermal system is being installed that will draw natural energy from the ground to generate power for some of the structures.

The agricultural emphasis pleases town planners because it recalls the area’s history — it was dotted with farms, small cattle ranches, and vineyards going back to the 19th century.

In explaining the project to the town’s Architectural Review Board last year, architect Chris Garrick said the family is “trying to focus on and promote the existing agricultural aspects of the site.” 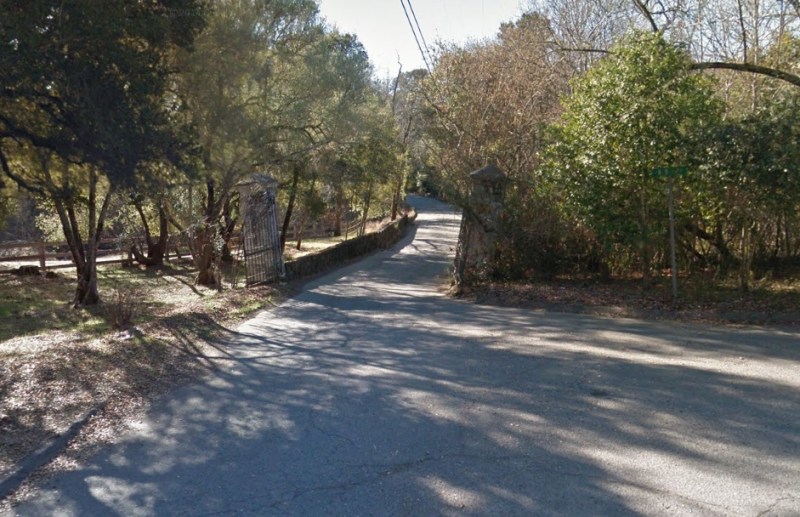 Above: Dilapidated entrance to former Jackling Home where the Jobs family is planning a new estate.

Thematically, and in terms of design, this is quite a bit different from a previous concept that emerged several years ago when Jobs was still in the midst of his legal fight with preservationists.

In 2010, Steve Jobs hired architectural firm Bohlin Cywinski Jackson, which had designed many Apple stores, to draw up plans for a new home in Woodside. At the time, a story by Gizmodo noted that the plans called for an $8.45 million new home of 4,910 square feet, which was to include a “5-bedroom home with plenty of windows and decks; a network of lighted stone walkways…. Everything is neat, tight, pragmatic, and in its place.”

These plans were submitted as part of a legal case to determine the value of a new home compared to the Jackling House. However, they were never submitted to the town of Woodside for formal consideration.

Powell Jobs has selected a different architectural firm to work with on this project, and her proposal will ultimately have almost three times the floor space as the mock design from 2010. However, the total cost of the project has not been disclosed in public documents.

While the new plans represent the first real attempt to replace the razed Jackling Estate, it is not the first work Powell Jobs has done on the land.

Two years ago, Powell Jobs won approval to do some renovation work on the property. She wanted to restore the water tower structure (pictured below), the only remaining part of the Jackling Estate that remained intact on this parcel of land.

Years ago, the building also served as a garage and servants’ quarters. Powell Jobs wanted to rehabilitate it for use as a three-bedroom residence so the family could enjoy the land and pursue some of the agricultural hobbies (a garden, beekeeping, chickens) that were already in place. 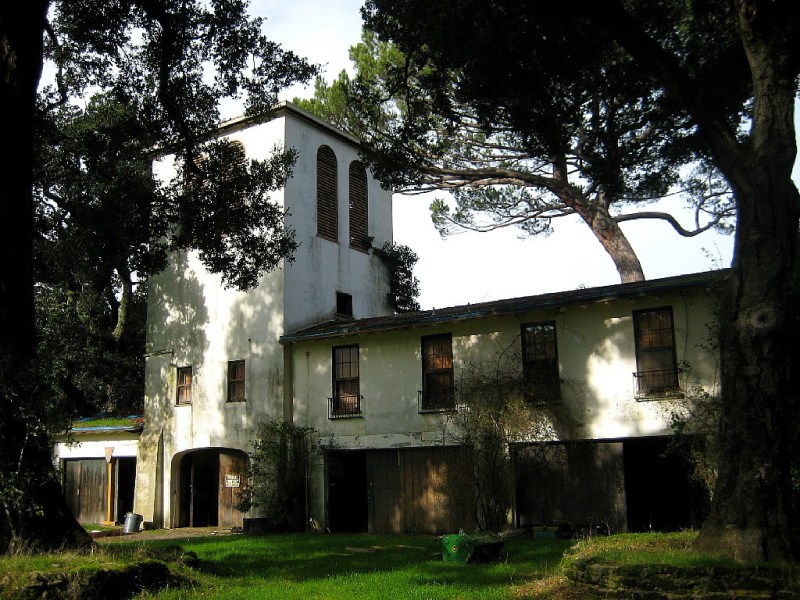 Above: The water tower that was part of the Jackling estate before it was renovated by Laurene Powell Jobs. 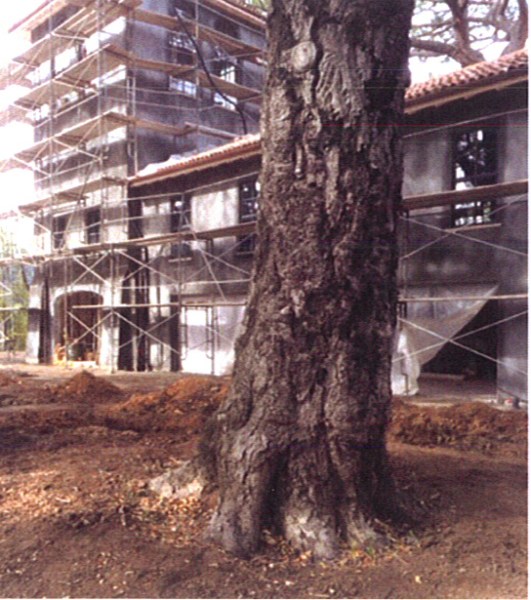 Above: Construction in process on the Jackling Estate’s water tower.

The plans for the new, main estate were originally submitted by Powell Jobs almost a year ago, and have been slowly winding their way through the town’s planning and architectural review boards. According to Woodside’s planning director, Jackie Young, a necessary zoning change should be finalized in the next 30 days.

After that, Powell Jobs must submit requests for the necessary building permits and receive approval before construction can start. Still, the project has been thoroughly reviewed by town officials in recent months and, with no neighbors voicing major objections, it would be surprising if any new roadblocks emerge at this point.

When construction does start, it has been estimated to take 596 days, according to the proposal. If all goes as planned, then a new house that Steve Jobs never had a chance to see built will be realized by his widow some seven years after his passing.