A Dallas-based company is making the wisdom of the crowds available to any investor — for free.

Today, TickerTags launches a beta version of its investment-oriented listening platform, which has been in development for the past two years.

“Think of it as a great discovery tool for what’s driving the [price of] companies” that an investor wants to track, CEO and cofounder Chris Camillo told me.

It has built-in tags for about 8,000 publicly traded companies, specifying such words or phrases as the brand name, related topics and regulation, competitors, and associated people. Mentions of those 350,000+ tags are tracked on feeds from Twitter, financial publications, non-financial publications like mainstream media, blogs, and industry-oriented forums.

The conversational tracking is displayed on a real-time graph, plotted against the current stock price. Camillo said that peaks and drops in online chatter can act as an early warning sign of a stock price rise or drop. 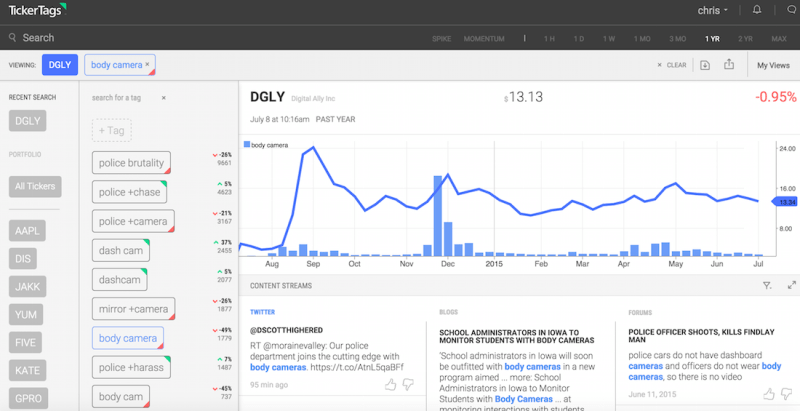 Take UGG Boots. Camillo said that, every fall, the social chatter for the popular footwear spikes.

But last fall, he said, “social chatter was down 30 percent year-over-year,” primarily because a warmer autumn meant the demand for the boots was delayed. Weeks after the chatter initially dropped in level, he said, the stock price for UGG Boots’ parent company Deckers Outdoor dropped, because “retailers were discounting [UGG Boots] in order to make room for newer stock.”

The company is describing the platform as the “first crowd-sourced investment tool to monitor the social web.” In addition to the monitored public posts, “crowd-sourced” refers to the company’s human Tag Curators with company-specific expertise who add tags from suggestions by the community, as well as from ones generated by the platform’s machine learning engine.

TickerTags’ planned revenue source is Private Tags. A user might want to add, say, “Disneyland” coupled with “crowd” to the existing tags for Disney, but keep the new one private.

Subscribers will be able to add their own tags for specific companies they are tracking. Subscription rates will start at $30/month for 40 tags, but Camillo said users can add up to 40 Private Tags free through the end of the year — after which they’ll have to pay up to continue using those Private Tags or to add others.

To date, he said, financial analysts have mostly focused their online listening on monitoring Google Trends for patterns in search terms that could affect stock prices.

He acknowledged they could use major social listening platforms like Spredfast, Sprinklr, or Hootsuite, but added those tools wouldn’t have his platform’s built-in tags for 8,000 companies, nor would they have a platform optimized for investors.

“It took two years to create those tags,” he said.

Today, TickerTags is focused on listening, but the company said it expects to add sentiment analysis within 90 days. Facebook data is planned for later this year.

In 2006, Camillo and cofounder Jordan McLain launched automotive inventory management tool eCarList, which was acquired for $48 million by DealerTrack in 2011. TickerTags is an offspring of the New York City-based financial services seed fund/accelerator ValueStream Development Lab.

Founded last year after 18 months of development under other organizations, TickerTags has received $1.5 million in seed funding from 2M and ValueStream, plus $800,000 from the cofounders.