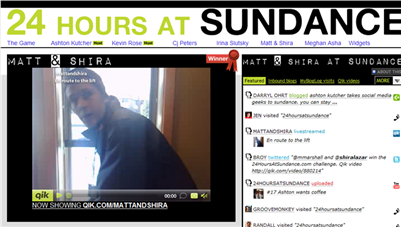 Over the weekend, I participated in a novel live video experiment at Sundance Film Festival in Utah — and I promised to come back and explain what we’ve learned about the state of technology surrounding video.

The tools we tried out over a 24-hour live streaming session weren’t perfect. But it’s partly because we weren’t prepared, and the event lacked sufficient organization. Take care of this, and the tools are actually close to excellent. Conclusion: You’re going to see a lot more of these shows coming.

The experiment was put on by actor Ashton Kutcher and video streaming company Qik. You’ve seen life-streaming before at sites like Justin.TV and Ustream – where people walk around videoing their lives 24/7. But this “24 Hours at Sundance” experiment added something new: live video streaming, plus a reality show –- that is, multiple players competing over 24 hours to get a number of tasks done live, videotaping themselves, and letting viewers type in messages to give them clues.

Qik said it got more than one million views on its site over the two days of the event, the highest traffic it has gotten for such an entertainment event. That doesn’t include other traffic pushed to its distribution partners, including BellRock/Yoshimoto, Nokia’s Ovi, and YouTube.

The event received some criticism for being disorganized. But we all knew going into this that it was an experiment and that things could get hairy.

More interesting to me was how the actual technology held up to the challenge. To start with, we used Nokia N95 phones, and we had Qik video technology installed on the phones. Qik is a known quantity by now to many of our readers. It’s one of three leading video players in the industry (the other two are Kyte and Flixwagon). Like these others, Qik is impressive, because it lets you take video on the phone, and if there’s no Wi-Fi or cell network to stream to, it saves the video on the phone so it can stream the video later when it detects a network.

This lets you take video without worrying about losing any of it. More on why this wasn’t fail-safe for this event in a sec.

All the videos then go to Qik’s website, where you can see all the videos in a channel, add tags, specify whether they’re public or private, and so on.

What we didn’t realize at Sundance is that Qik has a deal with YouTube to help it playback the videos. The reason Qik uses YouTube is partly to offload traffic from its servers when traffic is high, but also because YouTube put the videos on its own channel, and thus helps with promotion. This would all be fine, except for YouTube’s upload process is somewhat dumb. Whenever network weakness interrupted a Qik video we were taking — thus breaking the stream temporarily — it confused YouTube. YouTube took the break to mean the stream was over, meaning YouTube loaded an incomplete video. There was no way to replace that video with the complete video once it became available (we continued recording the rest of the video with our phones, and this was delivered eventually to Qik’s servers; but YouTube didn’t know). Result: Some of our most compelling video footage did not initially show up for playback, including the high point of us hanging out in a self-made igloo watching our own skit on video. Once I notified Qik of the problem, they manually restored the video here: http://qik.com/video/87412929.

There were lots of other problems we encountered with the set up. However, even in these cases, you could say they added to the challenge. First, organizers gave us a mobile Wi-Fi hotspot card, so we were ensured adequate broadband wherever we went. However, these cards simply didn’t work. So we were forced to rely on AT&T’s cell network most of the time, which was inconsistent.

Also, organizers equipped us with a phone battery pack that we could plug into our phones. Unfortunately, we were so busy performing our tasks, we completely forgot about this. So our phone started dying, and we kept looking for places to plug in the phones for recharging. It also meant we took less footage, to conserve power so that we could complete the race.

Finally, we were forced to operate out of the MySpace Café, located in downtown Park City, but it was continuously packed, and we felt unwelcome, since the waitresses more concerned about serving patrons like Paris Hilton than accommodating us. That did force us to find other places to operate, which meant we prowled the streets, hotel lobbies, or other public spaces -– not fun in sub-freezing weather. At the same time, I never really thought about this hardship. I was dressed for the cold, and the goal was to complete tasks around the clock, and adrenalin kept me going: Our team decided not to sleep at all (though at one point, I couldn’t help myself and nodded off around 4am in a hallway corridor for a few minutes.)

All in all, I thought the experience was valuable, and the show a success, despite what the critics say. It was a first time show. It could have been more organized, but I’m sure that will come next time. Also, I’ve recommended to organizers that they shrink the competition to 12 hours from 24 yours. It’s more fun if streaming is live the whole time. But the need to recharge phones and other issues (like needing sleep) make it difficult to keep up the live feed for 24 hours.

The other recommendation is to make the event Web site easier to understand. The 24 Hours @ Sundance site lacked narrative explaining what was going on: The various video posts from the different teams showed up in a massive list without any kind of clear labeling or categorization and unaccompanied by a story thread that viewers could use to get their bearings.

TechCrunch weighed in with a highly critical post of the event. However, it did so without really understanding the spirit of the event, or even the facts. The event was always supposed to be experimental and edgy, and we were warned by the organizers about this going in. Sure, staying up 24 hours is bound to get anyone cranky, and cranky we all became at around 4 am. It’s no wonder then that criticism from participants emerged. However, the allegation that the program put our lives in danger by forcing us to hitch rides with strangers is absurd. We were never forced to ride with strangers. There were buses and other transportation that we could rely on. Yes, one of the tasks did require us to ride two blocks with a celebrity –- in the safe heart of the festival grounds in Park City, Utah. It would be much more dangerous to walk on Market at 6th street in San Francisco in the middle of the day. Other participants have since written in comments to the TC blog post to say they also felt no danger during the event.

I’m looking forward to seeing where Kutcher, and his company Katalyst Media, takes this going forward. What the experience showed me is that video, hardware, storage and power are actually all ready for this sort of show to be extremely compelling. With a little more preparation of participants and more organization, the results will make for a far more exciting interactive experience.