An under-the-radar startup that’s been quietly cornering the international student accommodation market for the past five years has raised $60 million from a number of high-profile investors.

Launched initially as Overseas Student Living (OSL) in 2011 by an expat living in China, the web-based platform that matches students with professional landlords was rebranded as Student.com last year, and the company claims to have facilitated $110 million in bookings in 2015 alone, while it now lists properties in 426 cities in proximity to 1,000 universities.

The company has been entirely bootstrapped so far, but it’s now taking on its first institutional funding to expedite its growth in key markets. The round is being led by global investment firm VY Capital, with participation from Expa, Horizons Ventures, former Google exec turned Xiaomi VP Hugo Barra, and — interestingly — Spotify founders Daniel Ek and Martin Lorentzon.

To understand how this ensemble of investors came to plow $60 million into a startup that has had little to no media exposure, we need to look a little further back in time, to before Student.com was founded.

Luke Nolan, Student.com founder and CEO, was studying Chinese in Shanghai more than a decade ago where he met Shakil Khan, an entrepreneur who has had a number of online businesses in the U.K., and who has also been an advisor and investor in Spotify, as well as an advisor to Horizon Ventures. Khan officially joined his friend as cofounder at Student.com in 2014, where he has served to direct the company’s strategy, and he was joined by John-Paul Jones as a second cofounder to lead the technology side of operations. So Nolan’s connections from long before setting up Student.com have gone some way towards helping him secure good backers.

Though Nolan and Co. haven’t received much in the way of media coverage over the past five years, Nolan said that this has been a very deliberate action to capitalize on the first-mover advantage. “Shouting about it is just going to create a lot of competition,” he said in an interview with VentureBeat. So in effect, the company has been quietly building the networks, infrastructure, and user base.

In terms of how Student.com works, well, given that it’s geared towards the student fraternity, a typical property will offer contracts that cover the duration of an academic year, though you can find shorter-term arrangements too for a semester or even just the summer. It’s also largely focused on “high-standard” properties, which caters to parents concerned about where their darling offspring may end up living. 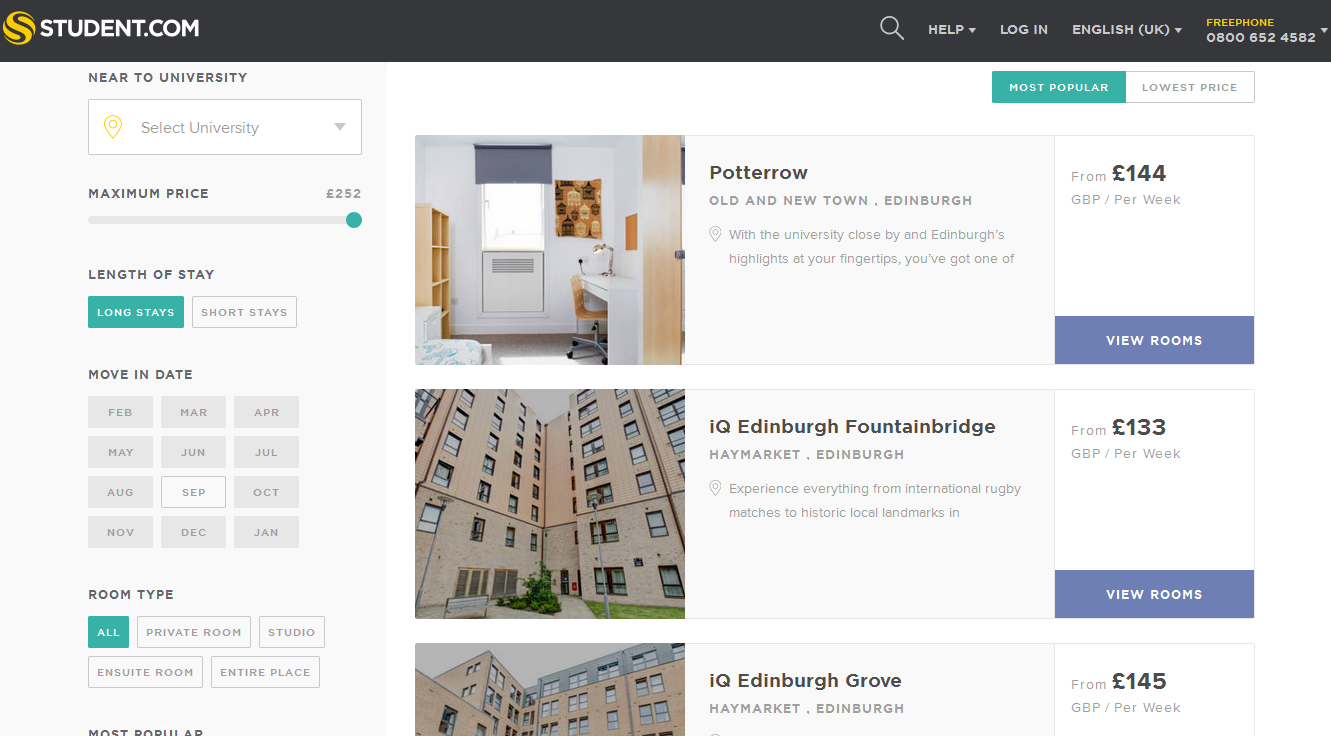 Though Student.com has seen students sign up from more than 100 countries, it’s seeing particularly big traction from Asia-based students (40 percent) looking to study in the U.S., U.K., and Australia, but there is also uptake from Latin America, Africa, and other regions.

“The student housing market is arguably one of the single biggest industries not yet digitized,” said Khan. “With Student.com, we’re not only enabling international students the world over to quickly and easily find housing abroad; we’re also giving landlords a digital and global infrastructure to reach millions of students.”

With an estimated five million students studying internationally, Student.com isn’t the only company to have observed a gap in the market. Founded out of Lisbon in 2012, Uniplaces offers a similar proposition to that of Student.com and has raised just shy of $30 million to help it grow globally — the bulk of which came just a few months ago. Then there’s the Rocket Internet-backed Nestpick, which is setting out to be the Airbnb for international students, and which has raised around $13 million in funding.

Though it has some competition, with five years in business, big-name backers, and $60 million in the kitty, Student.com has put itself in a good position to move forward and try to corner more of the market.

“Studying abroad is an incredible journey, full of excitement and adventure, and it’s fundamentally influenced by where you live,” said Nolan. “Since starting the company, we’ve helped tens of thousands of international students find their perfect homes abroad. This round of funding, and what we’ve got in store for Student.com over the next few years, should enable us to help millions of students have the best possible study abroad experience.”

Student.com employs 200 people in seven locations around the world, including Shanghai, London, New York, and Hong Kong. The company will use its newfound wealth to fuel its growth and expand across the Americas and the Middle East throughout 2016.