There’s an enormous market for log management software, one potentially worth $1.2 billion by 2022. It’s not all that surprising — demand for products that automate the orchestration of labyrinthine systems won’t likely decline anytime soon. And most log-tracking solutions don’t require significant infrastructural changes to implement, which no doubt appeals to DevOps teams.

That’s probably why Sumo Logic, a cloud-native, machine data analytics platform delivering continuous app intelligence, had no trouble attracting tens of millions of dollars in its latest round of funding. The company today announced that it has raised $110 million in a series G funding round led by Battery Ventures, with contributions from Tiger Global Management and Franklin Templeton. This brings the company’s total capital raised to $345 million, following a $75 million funding round in June 2017 and an $80 million round in June 2015, and it’s Sumo Logic’s largest round to date.

“We are excited to join Sumo Logic at this important moment in the industry-wide transition to cloud computing,” said Franklin Templeton’s Jonathan Curtis. “As the only cloud-native DevSecOps platform built to address the challenges of digital businesses, we believe Sumo Logic is well positioned to capture a significant share of its market.” 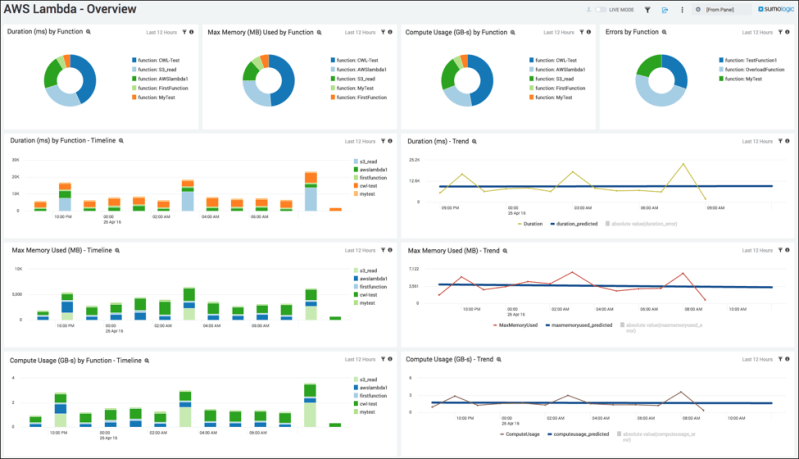 CEO Ramin Sayar says the funds will be used to expand Sumo Logic’s engineering, sales, and global operations teams, with an emphasis on extending the platform analytics capabilities of its various services. “Sumo Logic’s growth is driven by the shift to digital business and cloud adoption across all industries and companies of all sizes,” added Sayar. “We have proven that we are the platform of choice for not only cloud-native companies, but also enterprise companies and their cloud migration initiatives.”

To that end, Sumo Logic’s software-as-a-service (SaaS) platform — which spans 150 apps and integrations — provides analytics and insights to help clients build, run, and secure apps and cloud infrastructures. A network of clustered nodes ingests hundreds of petabyes of data and more than 20 million searches each day to troubleshoot issues in real time and act on (and prevent) cyberattacks and breaches, with over 75 prebuilt security solutions.

Sumo Logic’s machine leaning algorithms alert DevOps team members or leaders if there’s a problem through customizable and shareable dashboards and reports, or through third-party tools like Zendesk, Slack, PagerDuty, Jira, and Service Now. Alternatively, teams can boil down log lines with powerful built-in functions like LogReduce and LogCompare.

Service plans are priced flexibly — Sumo Logic averages data ingested over the month, providing pricing it claims is 30% less on average than peak pricing — and it is secure. Disks have AES 256 encryption and keys are rotated daily per customer, and the company claims its platform is the only one that’s compatible with SOC 2 Type 2, PCI DSS 3.2, Privacy Shield, CSA Star, and HIPAA certifications.

“We have been tracking the Sumo Logic team for some time and admire the company’s early understanding of the massive cloud-native opportunity and the rise of new, modern application architectures,” said Battery Ventures’ Dharmesh Thakker. “The company’s fast-growing business dovetails with Battery’s larger thesis on OpenCloud — open source and cloud-native technologies working with, not against, new cloud distribution models — and we are thrilled to partner with the team to capture the significant opportunity ahead.”

Speaking of capturing opportunities, Sumo Logic hasn’t been resting on its laurels. A little over a year ago, it acquired FactorChain to bolster its security toolset, and it recently launched a beta cloud security information and event management (SIEM) solution alongside Global Intelligence Service, an enterprise analytics insights tool for AI and benchmarking workloads. Sumo Logic also rolled out enhancements to better monitor and troubleshoot container architectures such as Docker, Kubernetes, and Amazon Elastic Kubernetes Service (EKS).

Sumo Logic, which was founded in 2010, is based in Redwood City, California, and backed by Accel Partners, DFJ, Greylock Partners, IVP, Sapphire Ventures, and Sequoia Capital, in addition to the participants in this latest funding round.

The company competes with Splunk, Loggly, and LogRhythm in a sector that’s predicted to be worth $11.4 billion by 2022, and one that’s predictably cutthroat. LogRhythm has raised over $100 million to date for its log management, security, and event management tools, while Harness just last month secured $60 million.