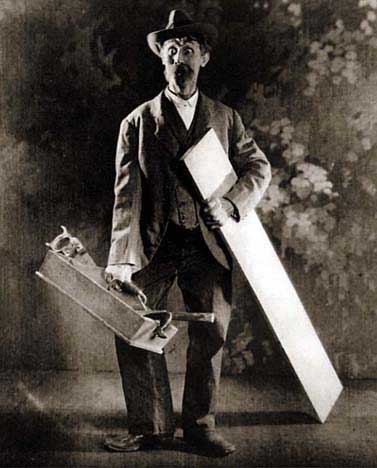 The super grid, the theme of VentureBeat’s next GreenBeat conference, involves a bewildering array of technologies and companies from industry behemoths like GE and Cisco to disruptive young startups. Together, they’re taking existing efforts to build a smart power grid to the next level. With billions of dollars of untapped potential in the profitable collision of information technology, energy, and cleantech, it’s no wonder so many pioneers are staking out territory.

In this article, we cover the major fields of super-grid opportunity and the companies, large and small, playing in them. It’s not an exhaustive list, but rather a guide to the companies we believe are currently best positioned to charge up the super grid.

One of the biggest challenges for the super grid is integrating sources of renewable energy like wind and solar power. The current electricity grid is most efficient when the power is being consumed at the same time that it is generated and when supply and demand are steady. With renewables, supply peaks unevenly since energy is not generated at a constant rate or at all times of the day.

Many small local sources of energy like homeowners selling back energy to the grid may also become available. A connected collection of these sources is called a microgrid and can be managed like a virtual power station.

The market for software to integrate renewables and microgrids with existing power generation seems to be at an early stage. Gridpoint delivers a suite of smart grid applications that aggregate and manage distributed sources of load, generation and storage including integration of renewables and electric vehicles.  Homer Energy provides modelling software to analyze and optimize power grids that incorporate high penetrations of renewable energy sources. Balance Energy produces microgrid and renewable generation solutions which integrate and aggregate distributed generation and storage resources.

There is a glut of new companies making solar microinverters and the software to manage them. A microinverter improves the efficiency of a solar array by allowing individual panels to operate independently. Normally panels are connected in a series and are only as strong as their weakest link, i.e. a panel which is shaded or soiled. Contenders include Enphase, Abound, PVPowered and Satcon. Some vendors like Satcon also makes solar energy management solutions for solar power plants. Satcon’s system breaks a large solar array into small strings of well matched modules in order to optimize the performance of the entire array.

Energy storage is expensive so utilities tend to keep power stations running on low output, a state known as “spinning reserve,” so they can be ramped up quickly to deal with peaks. This is not very efficient and not possible at all with renewables so several companies are tackling the storage problem.

BeaconPower specialises in flywheel energy storage which works by accelerating a flywheel to a very high speed and maintaining the energy in the system as rotational energy. The energy is converted back by slowing down the flywheel. Stored energy is brought online when demand peaks. A single flywheel can store 25 kilowatt-hours of electricity. 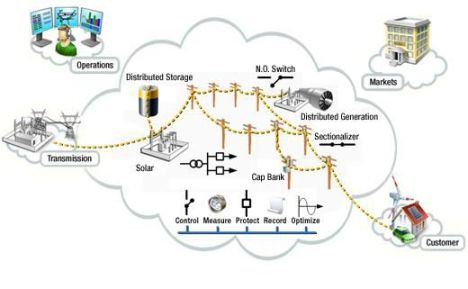 While smart meters — networked, computerized energy meters which replace old analog devices — get all the attention, equipment and software to manage the distribution network itself could actually be a bigger business opportunity. The Cleantech Group’s smart-grid vendors report says that this market is worth $1.4 billion in 2010. GTM Research’s smart grid market forecast goes even further and pins the 2010 market value at $2 billion rising to $5.6 billion in 2015. In spite of this, only 7  percent of venture capital dollars invested in smart-grid startups have been in the distribution sector.

Power is transmitted along high-voltage power lines from power stations to local distribution substations. These substations then distribute to homes and businesses. Smart-grid applications for distribution focus on automating those substations to a great degree and monitoring, fault detection and optimization of the power lines distributing electricity. The Cleantech Group estimates that only 56 percent of the more than 100,000 US substations have any automation. Utilities also need new distribution management systems to process and manage all the new data being generated by the distribution network.

The dominant companies in this market are legacy grid vendors like ABB, GE and Schneider Electric. Suppliers like Telvent specialize in particular areas like substation automation. Communications giants such as Siemens and Motorola provide the communications. A few smaller companies have broken into the market. Ruggedcom makes communications equipment like routers and switches specifically adapted to harsh electrical environments like substations. According to the Cleantech Group’s report Ruggedcom owns 54 percent of the substation routers and switching market. 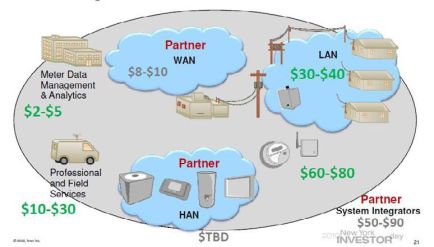 Smart meters bring information technology to the edge of the grid, recording electricity consumption and communicating data back and forth to a local utility. The Cleantech Group estimates the advanced metering market at $1 billion in 2010 while GTM Research optimistically forecasts $2.5 billion.

Any smart-meter rollout involves not just the meter manufacturers but also communications companies, meter data management systems and system integration. The diagram above from Itron shows where all that stimulus money is going and how it is divided between the different suppliers. 50 percent of all VC dollars going into the smart grid were invested in metering, in particular communications companies.

Communications are needed between the meters, local smart appliances and a concentrator which links the home network (HAN) to a local or wide area network to return the data to the utility. The HAN network in the US is dominated by a low power wireless technology called Zigbee. This isn’t true, worldwide, however. China, which plans to deploy 150 million meters by 2015, uses a powerline communications technology as does most of Europe.

The meter world is dominated by a small number of global companies such as Itron, Landis & Gyr, Elster and GE. Itron alone accounts for 50 percent of the smart meters installed in the US. They in turn buy components from smartgrid chip vendors like Accent and Teridian.

The communications software and chips are supplied by people like Silver Spring Networks, Trilliant and Smartsynch. Silver Spring networks in particular has  received a massive amount of VC investment ($247 million) and commands significant market share. On the powerline side there are companies like Ambient who create high-speed data communications networks over  medium and low voltage distribution lines.

Finally, utilities need new metering data management systems  to clean up and process the massive amount of data generated by the meters. There are a few pure play vendors in that area like Ecologic and eMeter but the giants like Itron also supply their own systems.

The smart meter can form one pillar of a home energy system such as Google Power Meter, Microsoft Hohm or Opower. Comprehensive home energy systems like those supplied by Tendril add smart sensors, appliances and plugs to the mix but are expensive and currently at an early stage in terms of deployment. 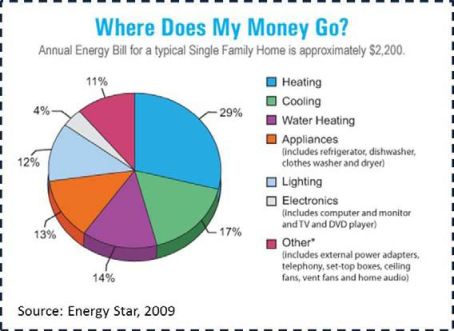 Some commentators maintain that demand response (DR) is the killer super-grid application. Demand response means reducing the demand on the grid when it exceeds supply (see our coverage). By 2019, DR could be capable of reducing peak usage by 20 percent.

The Cleantech Group’s smart grid vendors report puts the demand-response market at $1 billion in 2010. Traditionally this is a services market where a few major players like EnerNoc (which alone owns 25 percent of the market) and Comverge enforced DR contracts with large commercial and industrial power users.Now these vendors are also moving into residential DR. Comverge is currently the leader in that area.

There are many different ways to implement demand response. Utilities can directly shut down devices. Customers can trade load reductions with utilities as a sort of commodity on an energy marketplace. It may be cheaper for a utility to “buy” large reductions from customers rather than increase power generation or storage. DR policies can be automated and linked to real-time pricing so that, for example, certain devices are shut down or slowed down when the price exceeds a certain level.

Tendril and Gridpoint provide DR systems linked to pricing.  The increase in automation and complexity of DR systems is also creating the need for a new type of DR management system such as those supplied by EnerNOC and Echelon.

Most smart-grid applications upgrade or optimize existing grid elements and processes. Electric vehicles (EVs), however, are a completely new addition — a major reason why we need to move from the smart grid to the super grid.

Take, for example, the Nissan Leaf, which has a 24-kilowatt-hour battery pack. The average American household’s daily consumption of electricity is 30 kWh. Electric vehicles will probably also “cluster,” meaning people in certain geographies will buy them — as early adopters set trends for their neighbors. Those close concentrations of EVs will place a major strain on the local grid.

It’s not all bad news. Managed correctly, EVs could bolster the grid rather than just strain it. Their batteries could be used by the utility companies as a cheap alternative to other forms of electricity storage. Researchers estimate that each car could potentially provide up to $4,000 worth of storage capacity per year.

Large volumes of EVs require battery monitoring software and charging point systems as well as increasing the need for many of the previously discussed technologies like demand response. One of the leaders in this space is Better Place which plans to not only supply car batteries and charging points but also all the software to manage them. Another big player is Coulomb Technologies whose ChargePoint networked charging stations provide myriad applications from tracking charging point usage to billing and fleet management. In both of these cases, the companies create software for usage with their own products. Gridpoint supplies more general-purpose smart charging solutions to utilities.

That’s a brief introduction to just some of the companies building the super grid, which will look far more like the Internet than the energy-distribution network of today: distributed, adaptable, and ever-changing.