Companies like LG are showing off 98-inch 8K TVs at this week’s 2016 International CES. But those TVs won’t be practical in the real world without the right cables.

So the MHL Consortium, a group with roots in mobile data transfer, has created SuperMHL cables that can handle the flood of data that goes into and out of a 8K television. These cables will be on display at its booth at CES, the big tech trade show in Las Vegas.

SuperMHL will be able to transfer data at higher speeds than existing HDMI or DisplayPort cables. It can transfer data at high speeds and power a mobile device connected to it at the same time. And it can support TV resolutions that are even better than the super-crisp 4K TV images that are the best in the market today.

“We want to enable the 8K TV ecosystem with our Super MHL technology,” said Gordon Hands, head of the MHL consortium, in an interview with VentureBeat. “As a standards organization, we have to be ahead of the market so that companies can put their prototypes together. There’s a lot of technical challenges along the way. We are making sure the companies that build this kind of equipment will have all of the connectivity pieces so they can hook up a disc player or media streaming box or a set-top box to a TV and deliver the content with great quality.” 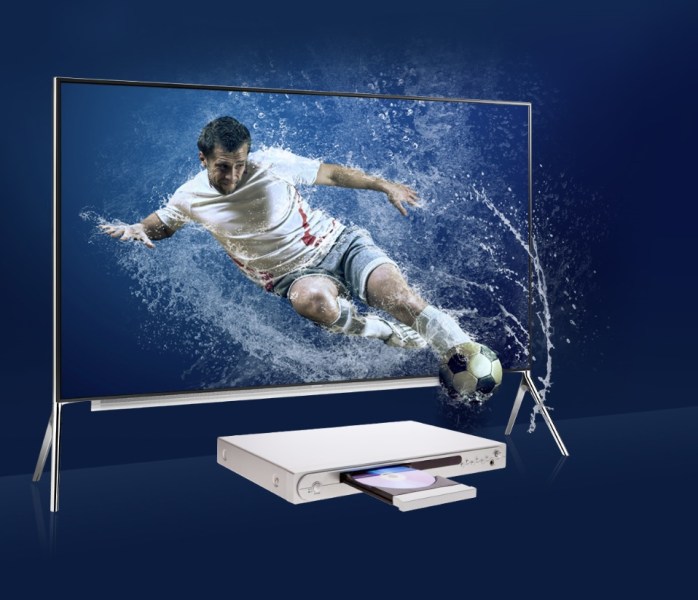 Above: SuperMHL cables will transfer many gigabits of data transfer a second into an 8K TV.

You can plug a normal MHL cable into a smartphone, laptop, set-top box, streaming-media stick, or Blu-ray player at one end. And then you can plug the other end into a television or display with a resolution of 8K, which is the favored technology for the next generation of displays. The SuperMHL specification is a big deal for the infrastructure of future TVs, but it requires a new breed of chips from companies such as Lattice Semiconductor (which acquired Silicon Image in 2015). To date, more than 900 million MHL-ready products are in the market.

MHL’s latest technology specification supports advanced color and high dynamic range (HDR), which ensures that the picture not only packs in more pixels, but that the colors are deeper and brighter to deliver a more true-to-life image. Sound quality also gets a boost with object audio support. The 32-pin SuperMHL connector carries audio, video, data, and power all through a single, slim, reversible connector. JCE and KinnexA will show off SuperMHL accessories for various devices that hook up to a TV.

“Home theater owners seek the best in picture quality to complement their sound set-up. They tend to own larger screens and be relatively high consumers of movie content. This has already led to comparatively high take-up of 4K, so 8K could prove to be the next logical upgrade for them,” said Jack Wetherill, analyst at market research Futuresource, in a statement. “As we have seen with 4K, the right connectivity is essential in delivering content to sets, so SuperMHL will have a key role to play in the delivery of 8K.”

The cable prices aren’t set just yet, but they will start out expensive and drop over time. Virtual reality devices will likely benefit from using SuperMHL as well, Hands said. 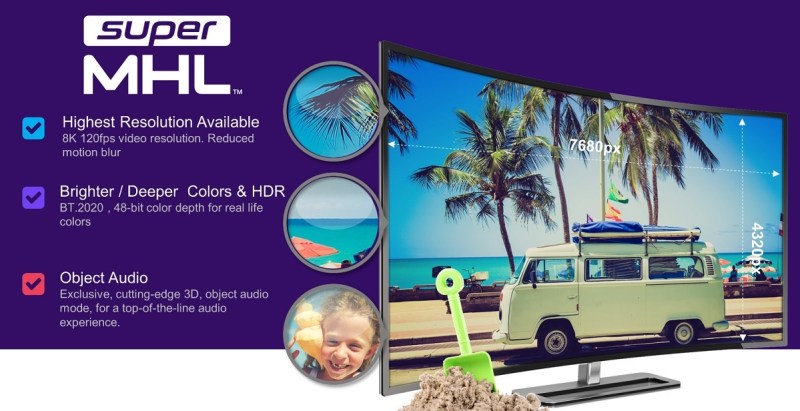 Above: Benefits of Super MHL connectors.