Carbon management platform Sweep has raised $22 million in a series A round of funding, as it sets out to enable large companies to lower their carbon footprints through big data insights.

With the global climate catastrophe currently top of the agenda in many business spheres, due in part to last month’s United Nations Climate Change Conference (COP26), companies are under increasing pressure to address their environmental impact. Earlier this year, dozens of banks launched the net-zero banking alliance, with a view toward mobilizing the “trillions of dollars necessary” to create a zero-emissions economy. And last year, BlackRock announced that sustainability was its “new standard for investing.”

But translating good intentions into meaningful action is often easier said than done — a survey last year conducted by the Carbon Disclosure Project (CDP) found that roughly half of global banks had not performed any climate impact analysis for their investment portfolios. And a Boston Consulting Group (BCG) report recently found that more than 90% of all organizations were unable to quantify their total carbon emissions comprehensively.

This is partly because accounting for emissions is a complex process, especially with so-called “scope 3 emissions” across extensive supply chains and partner networks. And this is a problem that Sweep wants to solve, with a platform that enables any business to measure their emissions continuously, giving everyone access to the data needed to better understand their carbon footprint.

Sweep offers various APIs that its customers use to connect via any system, service, or database with just a few lines of code — common data types include things like electricity generation, land use, travel, and material transportation. The Sweep platform itself can connect climate data across all the companies in a supply chain, allowing everyone to collaborate and unlock big data insights. Users can even set targets, including individual or team-wide goals that “gamify” the process through competition.

Ultimately, Sweep is all about connecting vast, disparate pools of data to garner a holistic overview of a company’s direct and indirect emissions. 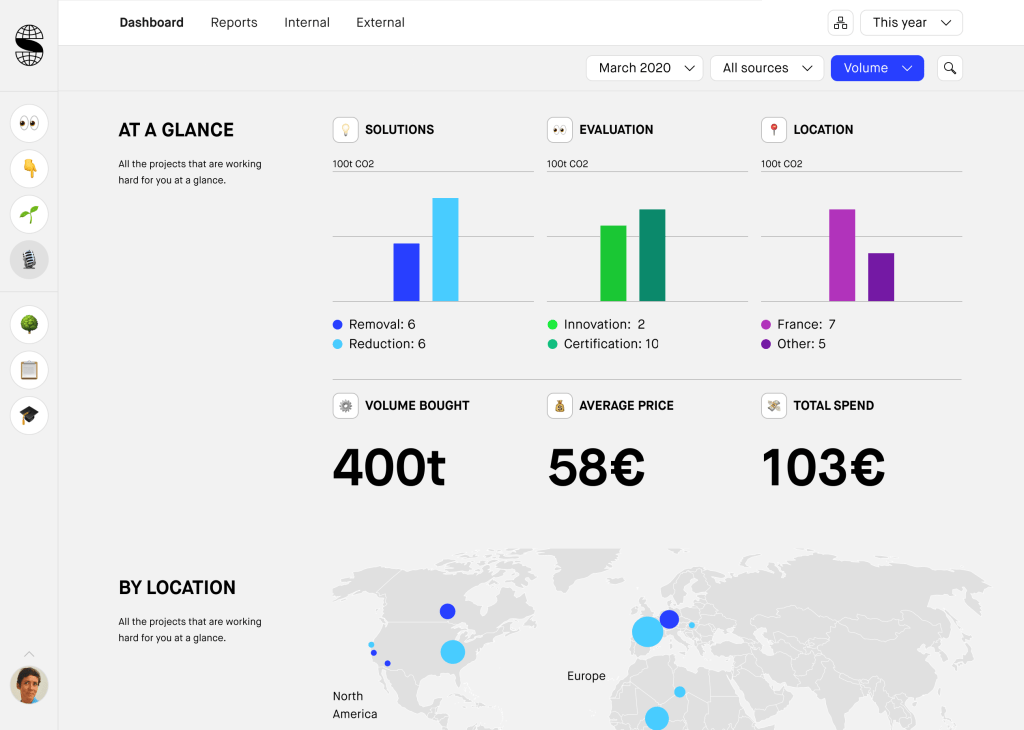 Above: “At a glance” data in the Sweep dashboard

Climate-tech startups have raised a reported $32 billion in 2021, representing a five-fold increase on 2016. But even with the best of intentions, companies can still find it difficult to manage emissions that don’t sit directly within their control — Coca-Cola European Partners (CCEP), a bottling partner for Coca-Cola, has previously estimated that 93% of its greenhouse gas (GHG) emissions were scope 3. With countless doomsday, apocalyptic scenarios envisioned for the decades ahead, there is a growing sense that time is running out, and businesses need to take a more proactive approach to address emissions across their supply chain.

“Companies will become more accountable for their scope 3 emissions, and this will drive demand for capturing accurate emission data on an ongoing basis,” Sweep cofounder and CEO Rachel Delacour told VentureBeat.

Sweep was founded out of Montpellier, France, in 2020 by Delacour and Nicolas Raspal — who sold a previous business intelligence startup called Bime Analytics to Zendesk in 2015 — alongside Raphael Güller and Yannick Chaze. The company launched in public beta back in April with $5 million in seed funding, and in the intervening months, it has worked with telecommunications giant Orange and French multinational Saint-Gobain. As part of a pilot program related to COP26, Sweep also worked with French investment bank Bpifrance to measure the carbon footprints of two companies it’s investing in.

“While the investing, lending, and underwriting activities of financial organizations (i.e. scope 3 emissions) are far higher than their direct emissions, just 25% report them,” Delacour stated.

With another $22 million in the bank from lead investor Balderton Capital, New Wave, La Famiglia, and 2050, Sweep is now well-financed to ramp up its enterprise aspirations, enabling prospective customers “who want to build a credible path to net-zero.”