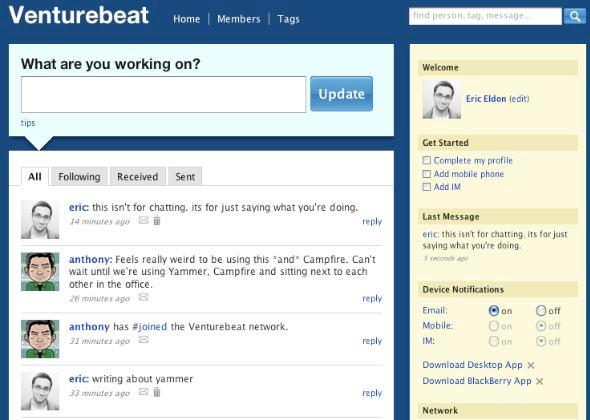 When Yammer presented at TechCrunch50, I wasn’t so sure about it. The company offers a service that’s the business version of micro-messaging company Twitter. You leave short messages about what you’re doing, your co-workers do the same, and everyone can view what everyone else is doing in a running stream showing the latest activity. Conceptually, this is a great way to quickly stay in touch with the people you need to communicate with.

And the company has gone on to win best-in-show at the TechCrunch50 conference.

The thing I was concerned about was Prologue, an open-source version of this concept, that blog platform WordPress launched last January. In fact, there are 11 companies in this area, as Forrester analyst Jeremiah Owyang points out, including a project by enterprise software giant Oracle.

So, when I heard about Yammer, it seemed to me that this is a great idea that’s a feature for enterprise software, but not a stand-alone company. Specifically, businesses often prefer to own their software completely and customize it to their needs — open-source software is perfect for that.

Here’s why Yammer won, anyway. Lots of companies might not want to bother setting up and customizing their own service. Instead, they just want to get started quickly with as little hassle as possible.

And Yammer comes loaded with useful features for businesses. There’s an application for business-favorite mobile device Blackberry, and a desktop application. You can even set up an organizational chart within the site, which is useful for larger organizations. You can customize your profile with additional work information and set notifications for email, mobile and instant messaging.

It also includes a smart, subtle interface for getting users to join.

When you first set up an account, you’re asked to provide your work email address. Then, you’re asked to invite colleagues using their work email addresses — not other domains. This helps ensure that every user really belongs in the account. Facebook used this same strategy when it first started: Only people with a university-domain email (yourname@college.edu), could join a particular network. Facebook then spread this concept to high schools and work places.

As one Yammer supporter quipped to me, regarding the open-source rivals: “There was open-source social networking software before Facebook, too.” Yammer’s business model is to charge companies for services when they want to take greater control over the company networks that employees create on Yammer.

Which leads to my other criticism. Twitter grew because it spans the web. Your Twitter-using friend gets you to join, you start following them, you see when they respond to other Twitter friends using the @username symbol — those messages appear within your feed of your friend’s tweets. Then, you go see who your friend is twittering to, and you may just decide to follow that person, too.

With Yammer, you don’t have this effect. The way Yammer spreads is if employees at different companies tell each other that they’re using it. Or if, say, it wins a top award at a tech industry conference and gets a lot of press coverage.

So, at this point, Yammer could be on its way to success. We’ve actually played around with Prologue, hoping to use it as VentureBeat’s intranet. Similarly, Yammer itself grew out of being a sort of intranet for another startup, Geni. But, because Prologue requires extra customization and setup, here at VentureBeat, we’re starting to use Yammer.