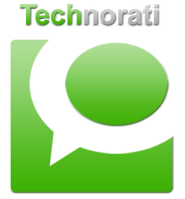 Technorati has searched through its own search index of the world’s blogs and released new data on the state of the blogosphere in 17 months. And my, there are a lot of us bloggers out there. It’s time for some serious navel gazing.

Technorati has indexed more than 133 million blogs since 2002. The last report was posted in April 2007. At that point, Technorati reported there were more than 70 million blogs, with 120,000 being created every day. But the creation of new blogs hasn’t necessarily slowed. Rather, Technorati has become better at weeding out inactive or spam blogs and deleted tens of millions of them.

Under Dave Sifry, founder of Technorati, the company had been tracking the blogosphere every six months or so since 2004, when there were less than 2 million. Under new chief executive Richard Jalichandra, the company has taken longer to come up with a new report that documents the state of the blogosphere. And now it has done a formal survey with bloggers for the first time.

“It’s much more interesting to define the active blogosphere now than it is to count the total number of blogs,” Jalichandra said in an interview. “At this point, it’s hard to define what a blog is, given things like Twitter and MySpace blogs.”

Those platforms as well as Facebook blogs aren’t counted in Technorati’s current definition of blogs, but they could be in the future, Jalichandra said. 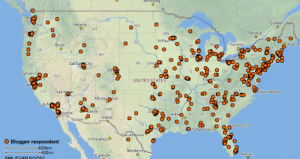 Technorati is now focused on the activity level and growing influence of blogs. For evidence of the latter, consider that four of the top ten entertainment sites on the web are blogs: OMG, TMZ, Asylum and PerezHilton. Blogs are represented in the top ten web sites across all key media categories.

“Blogs are media,” Jalichandra said. “That is the difference now. They are as relevant as the New York Times or the Wall Street Journal. The blogger with 5,000 readers may be just as credible a source of information for those 5,000 people as anyone else.”

The “active blogosphere” is an ecosystem of interconnected bloggers and readers, where journalism and conversation converge. The company collected the data for this year’s report by taking a random sample survey of the more than 1.2 million bloggers registered with Technorati. The survey, conducted by a third party, received 1,300 responses. That’s a statistically random sample, but it’s definitely skewed to serious bloggers, or people who care enough about their blogs to register them with Technorati. 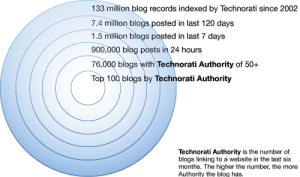 Newspaper journalists are no longer looking down on blogs. 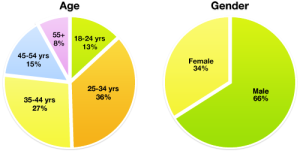 Technorati indexes just about every blog post that gets published in real time. But it has as good a handle on the state of blogging as any big search company. The report is mostly about ordinary bloggers such as Lori Stewart, a 45-year-old blogger who started a nonprofit group, Toys for Troops, which has sent 10,000 beanie babies to soldiers in Iraq.

During the month of June, Technorati noted that there were always more than 600,000 blog posts each day, with a couple of days surpassing the million-blog mark. On average, bloggers have been writing for about three years. Half of bloggers are on their second blog. 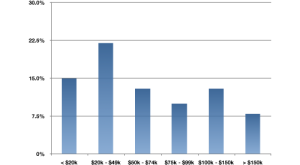 Based on the blogger survey, two-thirds of bloggers are male. About 50 percent are ages 18 to 34. They are more affluent and educated than the general population; about half earn more than $75,000 a year in the U.S. The mean annual revenue from blogging is $6,000. That’s not bad, considering the average investment is only $1,800. And bloggers are earning CPMs (clicks per mil, a measure of ad revenue) that are comparable to large publishers, which earn $3 to $6 CPMs.

Jalichandra considers the profitability of blogging as a whole to be an indicator of the strength of the medium. While many pundits have been predicting an over-abundance of blogs, a shake-out, or the collapse of ad revenues, Jalichandra foresees only a growth in blogging as a revenue-generating platform. He notes that a lot of bloggers consider themselves to be professional, but only 28 percent are using display ads. That suggests considerable room for growth in revenues ahead, Jalichandra said. 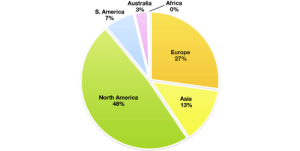 The profession is becoming more international. Technorati tracked 81 languages and bloggers from 66 countries in June. About 43 percent of those polled were in the U.S., and 72 percent publish in English. About 27 percent blogged in Europe, while 14 percent were in Asia and 7 percent in South America. About 3 percent were in Australia and 1 percent in Africa. They spend 3.5 times as much time on the Internet as they do watching TV. 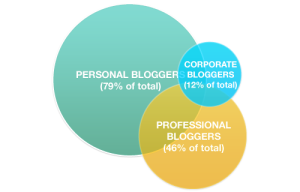 Among the benefits of blogging: bloggers report high personal satisfaction, career advancement, and receiving publishing or speaking opportunities. About 69 percent of corporate bloggers also identified themselves as personal bloggers, while 65 percent called themselves professional bloggers, the latter meaning they blog about the industry but not as an official spokesperson for the company.

As for brands in the blogosphere, about four out of five bloggers post brand or product reviews. About 37 percent of them do so frequently. About 60 percent blog about company information or gossip that they hear. And about a third of bloggers have been approached to be brand advocates.