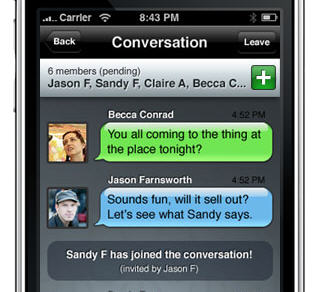 When Gogii, a startup backed by Kleiner Perkins Caufield & Byers’ iFund for iPhone apps, launched its textPlus app for the iPhone in June, I was sure it was a no-brainer hit. I said so in a post. TextPlus serves as a downloadable alternative to the built-in Messages application on the iPhone, which sends and receives messages via SMS protocol.

TextPlus looks nearly identical to the Messages client, except it can handle a multi-person text message chat room that hides the technical trickery beneath its bubbly surface. On a regular texting session, if you text 10 people and one of them replies, only you see the reply. TextPlus gives texters the equivalent of Reply to All in email, or a chat room. Pick your metaphor.

iPod Touch users can use textPlus to carry on text conversations over a Wi-Fi network.

Gogii deals with the logistics of sending and receiving messages, and pays AT&T to send them in order to keep textPlus free to customers. Kleiner put $5.2 million into Gogii, a hefty-but-unspecified amount of which goes to effectively paying part of its customers’ texting bills. To make at least some money back, Gogii sells ad space through mobile ad networks AdMob and Quattro Wireless, and the company has plans to sell and serve ads itself to capture more of the dollars and control ad service to its own customers better.

It must be frustrating to realize that the more seamless, robust and easy to use Gogii makez textPlus, the less users notice the trickery it’s pulling off to handle group texting sessions.

So far, textPlus has been moderately successful at volume, and not successful at making money. Gogii’s back end for textPlus handles an average 1.6 million messages per day, and about 800,000 different users over the course of a month. CEO Scott Lahman has been open, even to New York Times reporter Claire Caine Miller, about the fact that the ad revenue doesn’t come anywhere near covering the cost of sending the messages. So what? Always remember that Kleiner let Google operate for years without a revenue model before they turned on Google’s novel advertising system that’s become a multi-billion dollar business. There’s no reason not to believe Gogii has a similar plan in the works. But textPlus needs to get picked up as a must-have client among teens who discover the benefits of a group text discussion. Instead of selling ad slots, maybe Gogii should be buying some.