Whatever happened to Heathkit, the do-it-yourself electronics kits that used to be so popular at the dawn of the computer age?

For decades, Heathkit was a household name among those who liked to play with electronics.

From 1947 until 1992, Heathkit — which was the “brand name of kits and other electronic products produced and marketed by the Heath Company,” according to Wikipedia — was among the biggest, if not the biggest, game in town when it came to electronics kits.

Most ham radio enthusiasts and electrical engineers “of a certain age remember fondly their first Heathkit,” wrote EDN Network in May, 2013. “Everybody had at least one Heathkit.”

Heath got its start in 1926 in Maine as an aircraft firm before pivoting, in today’s parlance, to other businesses. According to that state’s Herald-Palladium newspaper, Heath eventually turned to electronics after World War II “and bought a large surplus of wartime electronic parts to build kits.” At its peak, it had 1,800 workers.

By 1992, though, things had changed. For some years, the company moved into the educational market, but in 2008, that last hope of staying alive died. “The situation was purely one of the economy,” Heathkit’s last known owner, Don Desrochers, told the Herald-Palladium in 2012. “Heathkit (Educational Systems) was primarily dependent upon federal and state funding for schools. Spending in education continued to drop down, and it was economically unfeasible to continue operating.”

In 2011, someone running Heathkit.com announced that the company would resume manufacturing electronics kits. “By popular demand, Heathkit is bringing back the kit building tradition,” the Aug. 15, 2011 post read. “The first kit will be a Garage Parking Assistant [which] lets you build your own system that uses ultrasonic sound waves to locate your car as it enters the garage.”

But according to Adafruit, today one of the biggest manufacturers and merchants of do-it-yourself electronics kits in the world, the promise of a reborn Heathkit was just that. “Nothing materialized,” Adafruit wrote in a blog post Saturday, leaving fans of the company, who had excitedly anticipated its return, disappointed.

To Adafruit, a company seen by some as the heir to Heathkit’s legacy, that failure to begin selling kits again, especially in light of a Reddit Ask-Me-Anything appearance a year ago by someone purporting to be member of Heathkit’s board of directors, has left a huge unanswered mystery: Whatever happened to Heathkit?

Given the money on the table, it’s a big surprise that Heathkit hasn’t come back. Adafruit has become a $33 million company since it was founded in 2005, and it seems likely that a re-launched Heathkit could quickly do big business, especially given its countless passionate fans. To leave those fans hanging only adds to the mystery.

“Heathkit is a brand that self-described ‘old-timers’ love,” Adafruit co-founder Phillip Torrone told VentureBeat. “They want it to come back and sell kits [and] be part of this ‘Maker movement’ that Heathkit basically pioneered and started.”

Added Torrone, “Many want this return to happen so bad, but each time it’s been a false start or failure. The latest iteration is bizarre and weird. Someone should shed some light on this.”

And that’s exactly what Torrone attempted to do in the Adafruit post Saturday. Although he was unable to arrive at a definitive answer, he did what would have to be called a thorough job of digging through all available evidence before hitting a wall.

VentureBeat attempted to reach the person currently listed as the point of contact for Heathkit.com by email but has yet to receive a response. This story will be updated when and if we get one.

‘Pause in our own soldering’

If the words that to this day live on Heathkit.com are to believed, someone is at home at Heathkit, and the lights are very much on. Though the site may well be out of date, someone in charge wrote recently, under the heading, “The news of my death has been greatly exaggerated,” “A number of our fans have found some ingenious and unexpected methods of sending in inquiries, suggestions, and even resumes to the Heathkit team, as well as sharing with us wonderful childhood memories of kit-building. We’re very excited to see such an outpouring of support. [On Dec. 20, 2013] we took a brief pause in our own soldering for three hours to answer your questions on Reddit.”

The author of those words also alluded to a “special competition:” “There’s a cache hidden within arm’s reach of the location [Brooklyn, N.Y.] that this photo was taken from,” the challenge read. “Inside, you’ll find a passphrase and a set of instructions. The first fan to send us the passphrase will be sent one of our first kits signed by the Heathkit team.” 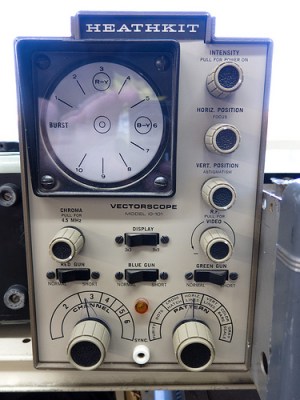 Above: A Heathkit Vectorscope.

Someone set up a Reddit account called IFoundTheHeathkit, and claimed success. But little else is known about the outcome of the contest, Torrone wrote.

Just as unclear is who runs the Heathkit Twitter account, who’s behind Heathkit’s Facebook page, or for that matter, anything else about the company, or whether it even exists as 2014 comes to a close.

Those familiar with the Maker movement know that today, Adafruit has built up a credible reputation as the standard-bearer of the electronics kit community. Yet Adafruit, which was founded by Limor Fried and which is at the vanguard of the open-source hardware movement, is very much a fan of others who do similar work.

“Adafruit fills the void Heathkit’s departure” left, Torrone said. “People build a kit not because of the outcome, the physical thing. They make a kit for the experience and skills they learn. The time you spend making a kit is precious and rewarding. “That’s what Adafruit does, [and] that’s what people remember about Heathkit.”

As for Heathkit itself, it is doing little to keep the mystery from building, a full year after the Reddit appearance. In a lengthy FAQ on Heathkit.com, someone wrote that the company definitely exists, is absolutely in business, and is for sure making all-new kits. When it comes to explaining who’s behind the company, though, there’s nothing but “more on this later” and an assertion that Heathkit is in stealth mode.

And why, if everything the company has said and done over the last year is on the up-and-up, has Heathkit chosen stealth?

“Efficiency,” the FAQ explained. “Here are two business choices. Choice (a) is, early on we spend lots of money, time and energy on press releases and marketing and public interaction. Choice (b) is, we quietly assemble a talented team, learn what our customer community wants, and put all our energy into creating great new products (while sustaining or improving great vintage products). Which choice sounds better?”