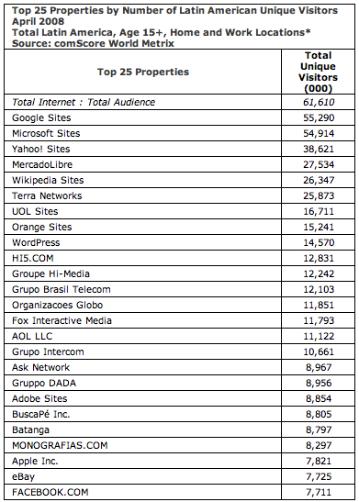 Latin America is a growing online market, with monthly unique visitors in the region growing from 53.6 million unique visitors last June, according to comScore’s first report covering the entire region, to 61.6 million this past April.

More internet users means more opportunity for social networks. For example, a new social network, Sonico, claims to have gained 17 million registered users since it launched last July, and has just raised a $4.3 million round from DN Capital and angel investors.

But Hi5 is the largest social network in the Spanish-speaking countries (except for Google’s Orkut, which dominates Brazil). San Francisco-based hi5 gained its position by doing things like introducing a Spanish version of its site a couple of years go, while market leaders Facebook and MySpace focused on US growth. This past April, hi5 had 12.8 million unique visitors, about a quarter of its 45 million monthly visitors around the world. That’s a 20 percent increase from two months ago, when the site had 10.7 million unique visitors in Latin America, according to Comscore. This is part of hi5’s worldwide growth trend: Hi5 has grown from 31.5 million last December, according to comScore.

ComScore data doesn’t count internet cafes nor does it count mobile traffic. Hi5’s internal numbers, with those two traffic sources included, show 16 million users a month in Latin America, with more than 30 million total registered users in the region through May.

But Facebook has shown the most shocking growth around the world over the past half year, coming in with 116.4 million worldwide users in April, over MySpace’s 115.7 million. Facebook is also booming in Latin America. Earlier this month, I wrote that the company had gone from four to six million Latin American users in March, likely spurred by the introduction of its Spanish-language version then. ComScore’s latest numbers from Latin America now show that Facebook had 7.7 million unique visitors in April.

So, Facebook appears to be growing faster than hi5 — although Sonico claims to be the fastest-growing Latin American social network.

Meanwhile, Fox Media Interactive has dropped from 14 million unique users last July to 11.7 million in April. It’s worth noting that Intel funded Vostu, which has raised a seed round of $1.3 million for a social networking platform that allows consumers to build their own social networks.

So what’s driving some networks’ growth, besides shear numbers of new Latin American users? Maybe, for Facebook, the fact that it is largely comprised of real people providing factual information about themselves — not fake profiles like what you see on other social networks — makes the difference? It’s not clear what’s happening driving Sonico’s growth, and anyway, it doesn’t register as a top site with comscore. Hi5, meanwhile, has continued with its market-specific customizations. It has recently introduced two new Spanish versions, for the Argentinian and Castilian dialects, with more dialect translations to come — using user-generated translations like what Facebook has already done. It also launched a Brazilian Portuguese version in March to compete against Orkut. It has also introduced a Spanish-language help page. Maybe this will allow it to keep growing, and maintain its market leadership?

There are also local competitors that provide social networking services — like Batanga, which had 8.8 million users in April. Blog platforms like WordPress, Blogger and local services are also larger than hi5 or any of its competitors.

Mobile social networking usage is exploding around the world, even more than web usage, as hi5’s internal data already suggests. Already, 375 million Latin Americans own a mobile phone — 66 percent of the total population, versus the 46 percent worldwide average. The mobile versions of large web-based social networks seem to have a big advantage when it comes to getting big on mobile, because web users go to the mobile versions of their web social network. This means sites like hi5 and Facebook have a lot of leverage in taking over the market.

Update: Per the comments below, I’ve added another table from this past April’s comScore report on Latin America.