ESS Technology has been the quietest chipmaker in Silicon Valley. While its competitors grew huge, ESS shrank and almost disappeared from the face of the earth. But the company is bouncing back. In fact, it is now profitable and has found a niche as a boutique chipmaker in high-resolution audio chips. And it hopes to leverage that position into a much larger role in communications chips. In rebounding from the edge of obscurity, it has woven a classic David-and-Goliath story. But for ESS, the road to next week’s international Consumer Electronics Show (CES) has been a long one.

A number of Silicon Valley chip companies have consolidated this year as a result of global megadeals. Intel bought Altera for $16.7 billion. Avago is buying Broadcom for $37 billion. Western Digital is buying SanDisk for $19 billion. Venerable names from decades of semiconductor manufacturing are disappearing as they’re absorbed by bigger rivals. Dealogic reports that chip companies have announced $100 billion in mergers and acquisitions in the past year — almost triple the year before.

But ESS is bucking this trend by going it alone, and is moving against the tide with its products, as well. While most chipmakers have moved from analog to digital (from a continuous wave-like pattern to the on-off switches of digital ones and zeroes), ESS has gone from digital to analog. And now, almost all of its revenue comes from analog chips — compared to 2008, when most of its revenue was digital.

“We call ourselves a 30-year-old startup,” said Dan Christman, chief marketing officer at ESS, in an interview with VentureBeat. “We ship to the biggest companies, from Xiaomi to Samsung. We’ve shipped billions of chips. But we act like a startup. We’re lining up a lot of things, and we hope it will be a perfect storm.”

ESS is unveiling a series of new chips next week at the 2016 CES in Las Vegas. The company has a new series of digital-to-analog converters, or chips that go into professional audio equipment. These flagship Sabre-branded chips boast a high dynamic range of 140 decibels and can be used in audio equipment to reproduce music with minimal distortion. ESS’ current chips are used in Sennheiser’s Orpheus headset, which retails for a staggering $55,000.

The sound from such devices is crystal clear, as you can hear for yourself in ESS’ sound room. I’m not nearly qualified to tell you if ESS produces the best sound quality on the market. But when I listened to Nora Jones belting out her jazz hit Don’t Know Why on ESS-enabled headphones, I can tell you it sounded awesome and almost three-dimensional. ESS just fills the room with sound. 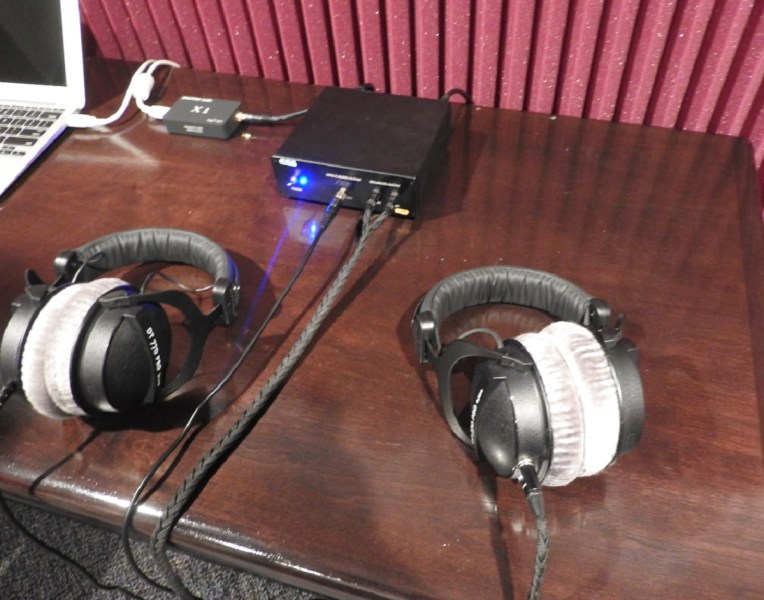 Above: I listened through these balanced headphones with ESS technology. The audio quality was awesome.

ESS was founded by Forest Mozer in 1984, at a time when chip startups were still one of the biggest investment magnets in Silicon Valley. Fred Chan joined as cofounder and assumed the CEO post in 1985. He focused the company on speech-synthesis chips for toys, and ESS began integrating multiple chips, eliminating the need for separate add-in sound cards on PCs. Chan ran the company for many years, and ESS eventually expanded into video chips. Products like the Creative Labs Sound Blaster helped ESS sell millions of chips during its boom years.

The company went public in 1995. Intel eventually moved in the direction of absorbing audio into the microprocessor, or central processing unit, which forced a diversification into video chips. In 1999, Chan turned the company over to Blair, who became CEO, while Chan took the title of executive chairman. Larger rivals put pressure on ESS, and by the 2000s, the commodities competition became too much. Rivals at the time included MediaTek, C-Cube, LSI Logic, and Zoran.

To complicate matters further, ESS and MediaTek tangled in a lawsuit, which was eventually settled with MediaTek paying $90 million to ESS. But MediaTek took the lion’s share of the video-chip business. That really hurt ESS, and it became obvious to Blair that his company wouldn’t be able to compete with the low prices of Asian commodity manufacturers.

“I started working on our board that what we were doing was not sustainable,” Blair said. “The old saying is that the definition of insanity is when you do the same thing over and over again and expect a different result. We thought we could probably survive, but we couldn’t win.”

ESS eventually divested its video-chip business and acquired a high-end audio-chip design group in British Columbia. Then it shifted toward high-end audio, with chips priced anywhere from $5 to $50.

In 2007, Chan retired. And in 2008, Blair took the company private in a $58 million deal, with the help of investor Imperium Partners Group. By going private, ESS got new capital and a chance to focus on the long-term, rather than on short-term quarterly reports. 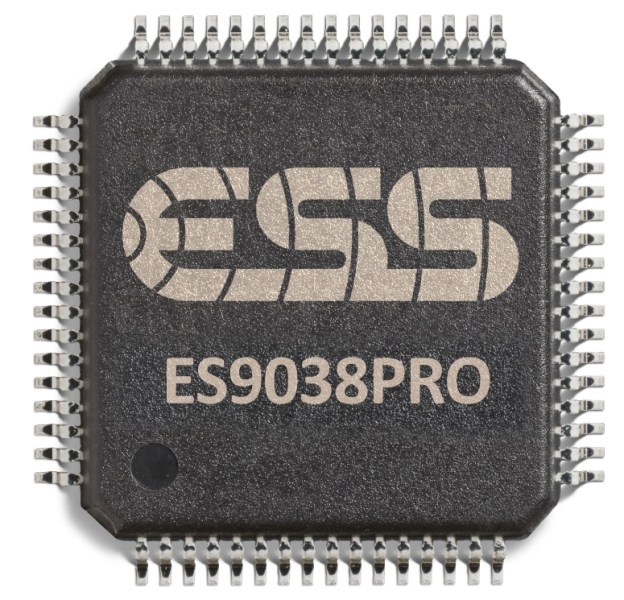 In many ways, ESS is still recovering from its near-death experience. It was a much larger company when it began competing in the commodity semiconductor business. But by the 2000s, ESS was stuck with declining markets, declining revenue, strong competitors, low profit margins, and operating losses. Blair remembers those bad years well.

At its peak, ESS employed more than 550 people. Blair had to lay off a lot of them. About 95 percent of the company’s revenue evaporated, and the company sank to a low of fewer than 100 employees. There were multiple pay cuts and furloughs.

Blair, however, maintained his focus on high-performance audio and analog products. Those products have a broader market reach and, importantly, offer ESS a proprietary edge. Surviving in fast-growing markets with fast-growing revenue, ESS now finds itself in a leadership position, with high profit margins. Customers include the world’s biggest audiophile companies, including McIntosh, Accuphase, Mark Levinson, Krell, Weiss, and Wavelength. ESS has been profitable for 11 consecutive quarters, but it has done so by staying lean.

Now the company employs just 126 people, including 55 at the company’s headquarters in Milpitas, California. But the saving grace is that ESS has hung on to its talent, including CEO Robert Blair, who has been with the company for 21 years. ESS also has a number of analog engineers, which are a rare commodity, even in Silicon Valley. Among those who remain, many have been on the team for more than 10 years. Blair credits those engineers with turning the company’s fortunes round.

“Our products sound good because we’ve got great technology,” he said.

He revealed that ESS has made use of a nifty trick, developed by chief scientist Martin Mallinson. ESS’s chip designers were able to make analog-like functions using digital transistors. These devices were a lot cheaper to make than traditional analog chips, and opened the way for ESS to make “digital analog” products that were also much easier to design and manufacture. The full impact of this design change is still playing out, Blair said, and will give ESS an advantage for some time to come.

“We think this is the way analog will be designed in the future, and we have tons of patents on it,” he added.

Moving to the high ground

Above: Some of ESS’ recent product awards.

Of course, ESS did not turn its fortunes around all by itself. Starting in 2009, the company started getting help from advisor Gil Amelio, the former Apple CEO whose claim to fame was acquiring Next and bringing Steve Jobs back to Apple. In an interview, Amelio said he views ESS as a “gem” among his five major clients.

“Bob put together a great team of engineers and scientists who realized they had to have something unique,” said Amelio, who became chairman in 2013. “They weren’t large enough to be a commodity player. If they had a me-too product, they would have been killed. What got me excited is that they kicked it up a notch and made better technology.”

As proof of this, ESS’s Sabre family has done well in the audiophile market, and the brand is enjoying a lot of recognition. Its Crescendo chips are used in “sound bars” for home-entertainment systems. And for the past couple of years, ESS has been moving into the mobile audio-chip market, gaining footholds with companies like LG, Vivo, Lenovo, and Xiaomi. Those companies are starting to use ESS chips in new “Hi-Fi” smartphones because they want to stand out from standard smartphones with low-quality audio. The mobile chips are priced reasonably, but they could very well make up for that price point in sheer volume.

Blair’s strategy has proved prescient, and the the audio market is now moving in his direction. Christman believes that Apple will help put high-end audio in the hands of the mainstream consumer by moving its library of iTunes songs to better-quality audio. Compressed MP3 files will eventually give way to higher-quality music in more modern formats that don’t sacrifice sound quality, he said.

“We think there will be a technology waterfall as the high-end flagship features move down,” Christman said.

All of this adds up to a bright roadmap for ESS, according to Blair.

As for being surrounded by chip giants, Amelio said:

I don’t know what the future will be. For now, the semiconductor industry is maturing. That’s what you see with companies merging and getting acquired. But getting acquired by someone else is not a strategy. We’ll see what the future holds. But what we set out to do was to invent some cool technology and build a modest size company around it. I think we really are going to change the world.

“It sounds simple, but it’s hard to do,” said Amelio, who is in his 70s. “You should expect to see diversification. We already have a core competency that differentiates us from everybody else.”

ESS is also starting to get some external validation.

“I think ESS is on the right path with their new strategy. They pioneered this field but got distracted and lost a lot of momentum,” said Tim Bajarin, an analyst at Creative Strategies. “They seemed now to be much more focused on their core capabilities and if they execute well, they should have a more proactive leadership role in this space.”