Necessity, they say, is the mother of invention. Even when you’re 11 years old.

Last year Las Vegas kid Ethan Duggan found himself in a tough spot. His mother had returned from a whirlwind shopping trip with “about 40 dresses, skirts, and tops.” Without his father home, Ethan was the default watcha-think-of-this audience.

Like any decent self-respecting 11-year-old kid, Ethan got tired of inventing new comments. 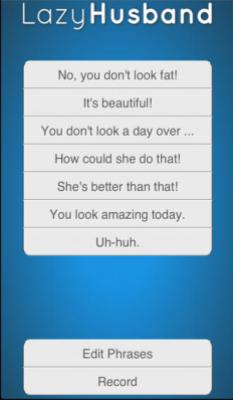 “Then I thought, I have a smart phone,” Ethan told me yesterday. “I recorded a few phrases … you’re look great , you’re beautiful, wow, no, you’re not fat … and just played them.”

Genius enough that he figured there oughtta be an app for that. So he made one. And Lazy Husband was born, soon to be followed by Lazy Wife and Lazy Kid.

Ethan learned to code “in about two to three months” on Codecademy during summer vacation between fifth and sixth grade, getting schooled in HTML, CSS, Javascript, and more. Then he put his skills to use with PhoneGap, a framework for building cross-platform mobile apps for iPhone, Android, and Windows Phone with web technologies.

Having proven that he wasn’t a lazy kid, Ethan is now planning to release Bargument, a cool app that will help you win any argument in a bar — even if you’re too young to get through the front door. To win a “bargument,” all you have to do is open the app, type the “fact” that you want to prove, and then show your friends the “proof” in a fake — but very authentic-looking — Wikipedia article.

See, I told you pigs fly.

The Bargument app is a little more sophisticated than the Lazy trio, and it was built on a different framework, AppGyver, which Ethan likes better.

“We met the AppGyver guys, and I thought it was awesome — really easy to build apps,” Ethan told me. “With other tools you have to pull up a simulator, which can be really slow and doesn’t show you exactly what a real device would. AppGyver lets you run it live on a target device.”

Ethan, who is now 12, doesn’t sound like your average 12-year-old kid. Of course, it helps that his dad is a geek.

His father Rick Duggan is a former developer who now leads the web development team at Vegas-based Zappos. And a year ago when he saw his not-yet-teenager kid wanted to build an app, an idea popped into his head.

With a little help from a friend. 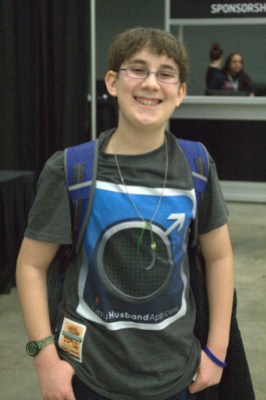 “When Ethan came up with the idea for Lazy Husband, I loved the idea and was going to do it myself,” Rick Duggan says. “But a friend asked why I didn’t have Ethan do this, and I thought: what a great idea.”

Ethan didn’t know any coding, but a little bit of googling brought up Codecademy, and as Ethan dug into the lessons, he enjoyed them and built up some skills. Father Rick encouraged him, but got some odd reactions from friends and acquaintances.

“Any extracurricular activity, like baseball camp, you get a great reaction from people,” he told me. “But when you say your son is learning to code … it’s a bit of a different stare!”

Ethan is learning the business side as well, his dad says, working on pricing models, costs, profitability estimates, revshare agreements, and figuring out the wonderful world of taxation, deductions, and giving Uncle Sam a piece of the action that most of us don’t meet until much later in life.

Today, Ethan and Rick are speaking at SXSW Vegas, in a presentation titled “Never too young to build a startup with your kids.” And he’s looking forward to a bright future in code.

“In the near future, I see myself developing more apps, possibly a game,” Ethan told me. “In the long term, I may not be in app development, but I’ll definitely be some kind of programmer.”

“Probably,” he adds, “a programmer CEO.”