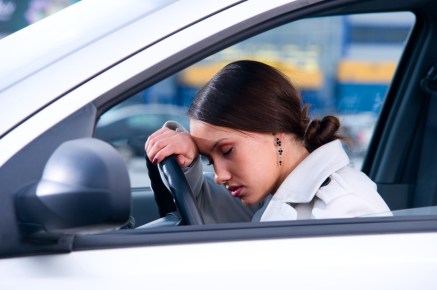 The most dangerous part of any motor vehicle is the driver. Swedish eye-tracking pioneer Tobii just announced a platform to detect drowsiness and distraction in drivers.

There are 41,000 road traffic fatalities a year in the U.S. according to the National Highway Traffic Safety Administration. An estimated 25 percent of all fatal accidents are caused by driver fatigue and, if you add in distracted drivers, that figure is probably even higher.

“The eyes tell it all,”  says Tobii’s OEM manager Jan-Erik Lundkvist. “You can see this by observing a sleepy person. It is not difficult to see when he is falling asleep. You can also very accurately see what a person is paying attention to. Our platform is just a technological means to do the same thing.”

The Tobii platform consists of two camera sensors, placed at different angles, and operating at near-infrared frequencies to eliminate interference from external light. The system can distinguish whether the driver’s eyes are open or closed or if the driver has turned his head. The sensors work even when the driver is wearing glasses or sunglasses.

Distraction is detected by registering the direction of the driver’s attention using head pose algorithms and eye tracking. Eye openness and blink characteristics such as blink speed and blink duration, and the ratio between them, indicate whether the driver is sleepy.  Tobii claims that its current system can detect distraction in 95 percent of cases and that it expects to achieve 99 percent accuracy by the time the system is on the market. Rival driver assistance technologies use steering wheel input, lane departure sensors or brake assist control based on an individual’s driving pattern to draw conclusions about distraction and sleepiness.

Tobii’s platform covers detection only. It does not inform drivers about their level of sleepiness or distraction. It would be up to car manufacturers to integrate Tobii into an existing safety system or provide a sound or a visual alert on the dashboard of the vehicle. We previously reported on a Danish startup, whose Anti Sleep Pilot iPhone and iPad application calculates the driver’s fatigue level in real-time, maintains alertness via reaction tests and alerts the driver when it is time to take a rest break.

“We are confident that this type of system will be integrated in high volume vehicles within 5 years,” said Lundkvist. “Many Tier 1 suppliers to the automotive industry, and car brands themselves, have shown significant interest in Tobii’s technology. The technology will not affect the price of the vehicle significantly. However, the price and package is a question for the manufacturers.”

Currently, eye tracking is mainly used in research, including market, usability and scientific research, where eye trackers collect and analyze gaze data, and assisted communication, where eye tracking is used to control and interact with a computer. “In the next year or two this will change greatly,” insists Lundkvist. “Eye tracking will add gaze interaction to mainstream computers to give the user an interface that can be directly eye-controlled but that is also adaptive to your gaze, preferences and attention.”  Earlier this year, Tobii introduced a prototype of the world’s first eye-controlled laptop in partnership with Lenovo.

Tobii is located in Stockholm, Sweden, has 330 employees and was founded in 2001. The company has raised $30 million in funding from Investor Growth Capital, NorthZone Ventures and others.