It was not the most comfortable of moments for the young, much-hyped startup.

A month ago, Twitter’s internal strategy documents were leaked by a hacker who had broken into the personal accounts of co-founder Ev Williams, his wife and another employee. Strewn through hundreds of documents were names of people the company had worked with or considered hiring.

And one of them was hip-hop megastar P. Diddy, owner of Twitter account @iamdiddy with more than 1.7 million followers.

They had discussed making the rapper an adviser with equity in exchange for help on crafting an entertainment and marketing strategy in April. But in the meeting notes, they conceded that, “Diddy values his contribution higher than we do” and that he could be a “distractionary element” (see the company’s notes below).

Now with the documents potentially out for the public’s eyes, Twitter’s management had to go through and contact every one of the people mentioned, including P.Diddy to protect their relationships.

“We had to call up everyone and tell them, ‘Don’t be mad. Somebody with some stuff on the Internet might write about you,'” he said. “We made sure to tell them that these notes didn’t reflect anything.”

This time, Stone was more than cordial in talking about the hip-hop mogul on the record:

“When we came away from that meeting with P. Diddy, we were super impressed with how savvy he was,” Stone said. “He has stayed relevant for so long, and how does he do it? He’s constantly reinventing himself.”

From the meeting notes: 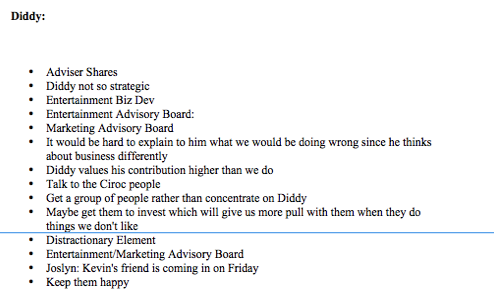