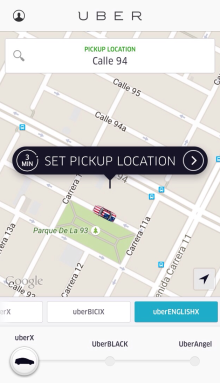 The initiative kicks off in only Colombia at first, but it is planned to launch in other major Latin American markets at a later stage.

From today, travelers in Colombia will see an option within the Uber app that says “UberEnglishX” that they can select if they’d rather have a driver who can converse in English. But of course, this could limit a rider’s options in terms of available cars.

Founded in 2011, Duolingo is a multifaceted language service that uses gamification to help people to learn to read, listen, and speak in a language of their choice. It claims 100 million users. The Pittsburgh-based startup also offers a crowdsourced text-translation platform, as well as a language proficiency center that launched last year. And it’s this latter service that Uber is harnessing for its new offering in South America.

The Duolingo Test Center lets anyone become “certified” as proficient in a language for $20, and it takes no longer than 20 minutes to complete the test remotely. Since its launch last year, the Duolingo Certificate has become acceptable evidence of English proficiency at the Harvard Extension School and other organizations. 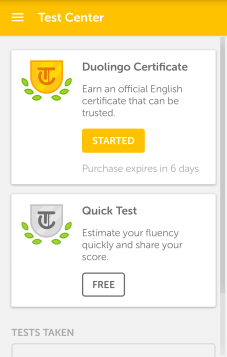 Alongside today’s news, Duolingo is also announcing a new “Quick Test” within the Duolingo Test Center platform. It differs from the Duolingo English Certificate in that the results are not verified by a human, and as such it’s available for free. Uber won’t be accepting these test results, however.

While today is being pitched as the “UberEnglish” launch, Uber did actually launch the service in Shanghai last year. But the company itself interviewed and hand-picked the drivers with the best English skills. With Duolingo now on board, this will make it much easier for Uber to manage and scale the initiative, as it doesn’t have to directly interview each driver. In its tests to date, 1,000 Uber drivers have been certified through Duolingo.

It’s worth noting here that Uber also offers an UberEspanol service in key U.S. cities for those seeking a Spanish-speaking driver, but that hasn’t (and doesn’t) use the Duolingo certification method.

In terms of why the Duolingo tie-up is restricted to one market for now, it all comes down to human capacity. “We have a team of one person working on this, so we’re taking it step-by-step,” a Duolingo spokesperson told VentureBeat.

The company also confirmed that they’re talking with Uber about other Latin American countries, as well as one U.S. city and one other country. “We do consider rolling this out internationally, but it’s a matter of coordinating and finding out if it’s possible in other markets,” the Duolingo spokesperson added.