Upsolver, a no-code startup that enables analytics on cloud data lakes, this morning announced that it raised $25 million in financing led by Scale Venture Partners. The company, which also today launched a free community edition of its product, says the funds will be used to hire engineers and scale its go-to-market efforts.

Enterprises are rapidly adopting the cloud — 68% of CIOs ranked migrating to the cloud as their top IT spending driver in 2020, according to a Deloitte survey. But building an analytics-ready cloud data lake can be complex and expensive. A recently published Statista report found that around 83% of cloud practitioners considered security, managing cloud spend, governance, and a lack of resources to be significant barriers to entry.

“We wanted to store data affordably in the cloud without analytics vendor lock-in,” Rafael said. “Unfortunately, what used to take three hours using SQL turned into 30 days of hand-coding and complex Spark configuration. We created Upsolver to bridge this gap between raw cloud data and analytics-ready data.” 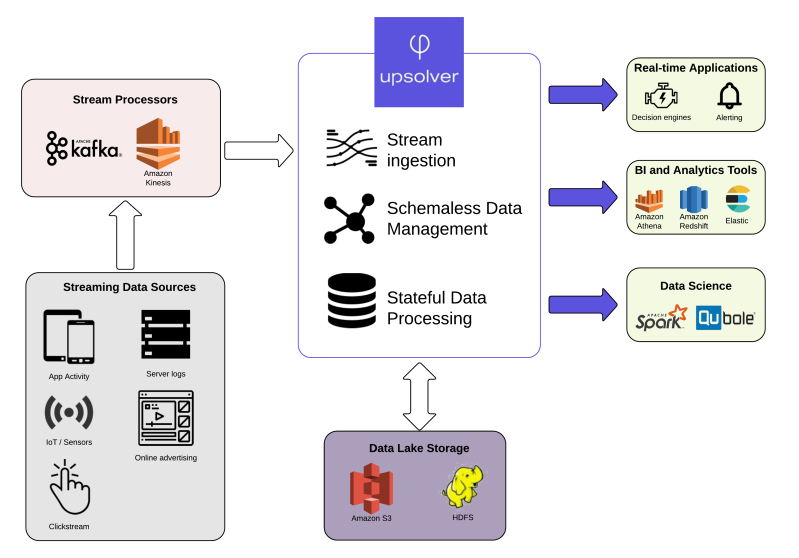 Upsolver’s product lets companies perform analytics using a range of query engines and data systems including PrestoDB, Trino, Athena, Snowflake, Redshift, Synapse Analytics, Splunk, and Elastic. Ultimately, the goal is to replace all a customer’s code-heavy approaches with Upsolver’s compute layer, which sits between the customer’s cloud storage and their preferred tools, engines, and apps.

“Upsolver is a critical component for successfully implementing a cloud data lake for analytics, which is a popular approach due to the affordability that data lakes provide. We complement cloud data warehouses, search engines, and other purpose-built data stores as well,” Rafael said. “Upsolver is often used to output prepared data to those platforms making data available to standalone query engines. Data engineers use Upsolver’s visual user interface to build any data transformations and preparation tasks. This generates SQL that the data engineer can also directly edit to fine-tune the processing.”

Rafael says that Upsolver will soon add the ability to replicate databases into data lakes while keeping them up to date. The platform recently launched on Azure and is set to become available in a community edition delivering “free-forever” capabilities to those with smaller workloads, providing a proving ground for companies who might want to work with Upsolver on larger use cases.

Scale partner Ariel Tseitlin asserts that Upsolver benefits from having a foot in two fast-growing markets: big data analytics and data lakes. The global data lake market size was valued at $7.6 billion in 2019, according to Grand View Research. And in 2017, Forbes reported that 53% of companies had adopted big data analytics, with a large portion opting to run workloads in the cloud.

Thirty-employee Upsolver says that revenue tripled 2020 as brands including Cox Automotive, Wix, and AppsFlyer joined its customer base.

“Monolithic analytics platforms are a thing of the past. Today’s organizations require a variety of analytics tools to fully capitalize on their data,” Tseitlin said in a press release. “Data lakes originally promised this variety and openness but also required a large, ongoing investment in engineering. Upsolver eliminates this trade-off.”

Existing investors Vertex Ventures US, Wing Venture Capital, and JVP also participated in Upsolver’s series B round. It comes on the heels of a $13 million series A and brings the company’s total raised to date to $42 million.