Luxe is releasing an update to its on-demand parking valet service that is designed to make dropping off and returning your vehicle a lot easier. The company has made generally available two product enhancements, namely its Drop points and Scheduled Return features.

With Drop Points, Luxe says that it’s responding to inquiries from customers asking about the best places to drop off and pick up their cars. Now you need only open up the iOS or Android app, type in the address where you’re going, and Luxe will display on its map blue points to indicate the nearest location where you can drop off or pick up your car. Unfortunately this feature, while open to the public, is only available in the Financial District and South of Market neighborhoods of San Francisco. Other cities are being planned for the future.

To encourage customers to use these designated locations, Luxe said it’s going to be “offering Drop Point locations at better prices than the surrounding neighborhood, during rush hour times when things are busiest and most frantic, and where we do see some of the biggest demand-based pricing.”

Providing lower fares to customers at Drop Point locations is something other on-demand services are offering as well, Uber and Lyft in particular. The former is testing so-called “smart routes” with its UberPool service that lets you pay less just for walking a little bit further to meet your driver. The latter has had HotSpots for its Lyft Line offering that also offered you savings for going to a designated location. 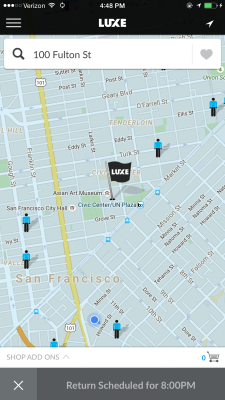 In July, Luxe revealed that it was testing out a new feature that let you schedule when you want your car returned. The idea is that if customers have a specific schedule they’re keeping to, they can let the system know when and where to drop off the vehicle. From today, the Scheduled Returns feature is now available for all Luxe customers in all cities it operates in.

Phil Farhi, Luxe’s VP of product management, shared in a blog post: “Scheduled Returns is all about giving you greater convenience, flexibility and the ability to plan ahead so you don’t need to stress or waste time by waiting for your vehicle.”

These updates are part of an effort to further Luxe’s goal of making it less stressful to park your car in the city, at least if that city is San Francisco, Los Angeles, Seattle, Chicago or Boston, and soon New York City, Washington, DC, Austin, or Philadelphia, as well.

To access these features, just update your Luxe app in the App Store and/or Google Play.