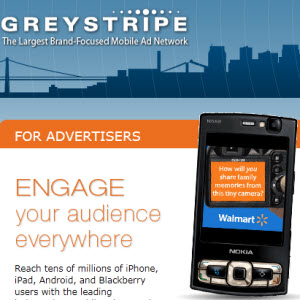 Greystripe raised $18.1 million in four rounds. TechCrunch said that Greystripe is on pace to generate $25 to $30 million in revenue this year and $6 million in gross profit.

eMarketer has predicted that U.S. mobile ad spending will break $1 billion this year, up 48 percent from 2010. Greystripe has not responded to a request for comment. Greystripe, headed by Michael Chang, is one of the biggest independent mobile ad networks. Others include Jumptap and xAD.