Veer VR has launched a free web-based virtual reality content creation tool as part of an effort to get users to create more content within the Veer global VR content community.

Veer Experience is a coding-free interactive creation tool that people can use to create VR photos and videos, including those that can be viewed in 2D as 360-degree experiences. Veer already has more than 50,000 creators and 30 million users from more than 180 countries.

“The VR industry is lacking quality content, but with the proper tools we will be able to empower creators to produce more high-quality engaging VR content easily,” said Veer VR CEO Ayden Ye, in a statement. “By utilizing the Veer VR content platform, fresh VR content will be delivered to a broad, global audience. Veer is going to continue developing more advanced features that cater to the needs of VR content creators.”

Veer Experience is for VR content creators who want to tell their VR photo and video stories in a more engaging, creative, and immersive way. Experience supports VR video and photo background in different formats (360 degrees, 3D FOV), and allows creators to simply create an interactive story by adding hotspots, cards, external hyperlinks, VR video and photos as a background, and more. 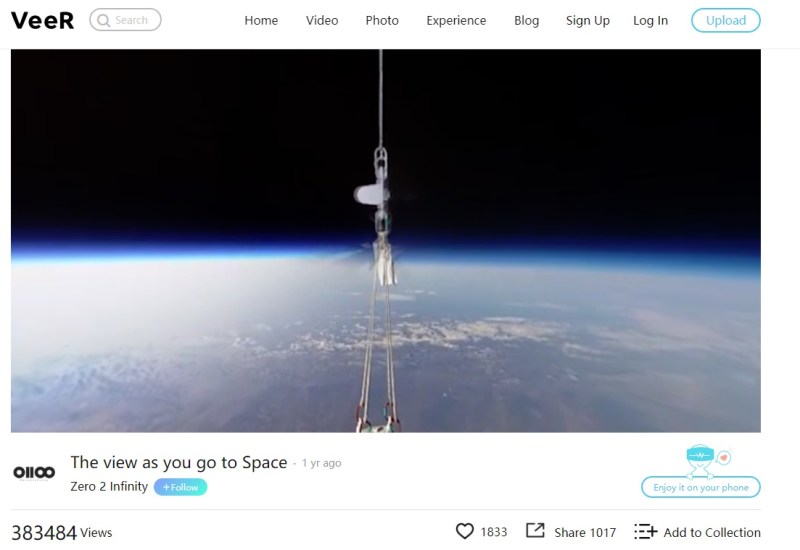 Above: Veer lets you view images in 360 degrees or VR.

You can use Veer Experience to distribute VR content across platforms with a single click. Veer Experience videos and photos work on the web, mobile, and major VR headsets, including Oculus Go, Oculus Rift, HTC Vive, Gear VR, Google Daydream, Windows MR, Mi VR, and more. A lot of the content focuses on travel, sports, and adventures.

Veer’s investors include Bertelsmann Asia Investment, DCM, Qiming VC, Sierra Venture, and Samsung NEXT. The company has 70 employees and got its first funding round in 2016. It has raised $17.5 million to date.

Previously, Veer only supported VR video and VR images. With the new experience tool, users will be able to create interactive 360-degree VR video stories with just a few taps or clicks. Top creators include Warner Bros. Pictures, World Bank, and the Academy of Art.