In a big victory for micro servers, Verizon is announcing today that it is selecting Advanced Micro Devices‘ SeaMicro servers to build out several data centers with thousands of energy-efficient servers. 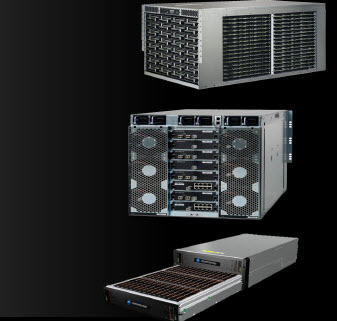 SeaMicro pioneered a category of servers with a sea of low power, simple computing cores, or brains. AMD acquired SeaMicro last year for $334 million, and the Verizon deal means that AMD is getting a big payoff from that strategy, said Andrew Feldman, corporate vice president and general manager of AMD’s server group and the founder of SeaMicro.

In an interview with VentureBeat, Feldman said that Verizon had a vision for public cloud services that are more flexible and subject to much deeper control. He said he hopes the deal will be a sign of more good things to come for micro servers, which are the fastest-growing part of the server market.

“They’re using our server infrastructure from soup to nuts,” Feldman said. “This is very exciting, and they immediately will become one of our largest customers.”

Kevin Clark, director of cloud platform engineering at Verizon, said in an interview with VentureBeat that his company still use a variety of computing architectures for its data centers. But the company will now build several data centers with thousands of SeaMicro servers as Verizon builds out its new global cloud platform, Verizon Cloud, and cloud-based object storage service.

“We’ve wanted to solve the problems of cloud flexibility for a long time, and we immediately saw the benefits of what SeaMicro has to offer,” Clark said. “The cost and efficiency are unparalleled. It’s very important that we make it painless to set up a cloud.”

SeaMicro used Intel Atom chips before AMD acquired it, and it still offers several models with Atom chips. But the new SeaMicro SM15000 will use AMD Opteron chips, Feldman said. That’s a blow to Intel, which has the leading market share in chips for micro servers. Intel has announced a number of its own new products in micro servers, but there is always a danger that low-end micro server chips could undermine Intel’s high-end enterprise server chip business. So Feldman believes that Intel will be cautious about charging into micro servers.

A SeaMicro server has hundreds of cores in a single system that use a fraction of the power and space of traditional servers. In 10 server rack units, SeaMicro can pack 512 compute cores into a tight space, eliminating the need for hundreds of cables and thousands of unnecessary components.

AMD and Verizon co-developed additional hardware and software technology on top of the SM15000 server to improve performance and reliability as needed for enterprise-level service level agreements. That means the servers are built to guarantee server uptime.

“There was a huge amount of work done by Verizon,” said Feldman.

Verizon designed its cloud to make optimal use of its computing and storage services, mainly by disaggregating servers from specific applications. Now Verizon can provision a new application on a virtual machine server within seconds, or a fraction of the time it normally takes. The project took about two years to complete. The public beta for Verizon Cloud will launch in the fourth quarter, and it will bring Verizon into competition with companies like Amazon.

“We reinvented the public cloud from the ground up to specifically address the needs of our enterprise clients,” said John Considine, chief technology officer at Verizon Terremark. “We wanted to give them back control of their infrastructure – providing the speed and flexibility of a generic public cloud with the performance and security they expect from an enterprise-grade cloud. Our collaboration with AMD enabled us to develop revolutionary technology, and it represents the backbone of our future plans.”

“The rapid, reliable, and scalable delivery of cloud compute and storage services is the key to competing successfully in any cloud market from infrastructure, to platform, to application; enterprises are constantly asking for more as they alter their business models to thrive in a mobile and analytic world,” said Richard Villars, vice president, Datacenter & Cloud at IDC. “Next generation integrated IT solutions like AMD’s SeaMicro SM15000 provide flexible and high performance solutions upon which companies like Verizon can build the next generation of cloud service offerings.”