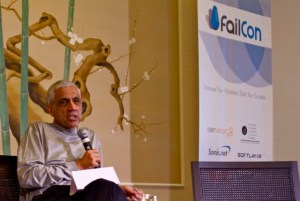 The willingness to fail is the key ingredient in success, billionaire investor Vinod Khosla told the audience at the Failcon conference in San Francisco today.

Failcon is an annual event where people gather to talk about failing their way to success, a unique forum that celebrates mistakes.

Khosla (pictured) has had may successes, but he also knows about failure first hand. He was one of the founders of Sun Microsystems, as well as a partner at Kleiner Perkins, before starting Khosla Ventures, which has invested heavily in cleantech, web startups and social media.

One of Khosla’s many failures was with a product called Dynabook, which was like a 1980s version of an iPad with a pen. Prominent investor John Doerr was on the board, and the management team had an impressive set of credentials. The marketing team came up with the tagline “the pen is the point,” and, Khosla said, “we started believing that bullshit.” But while the management had been caught up in the technology, what mattered to users was actually mobility.

Knowing 90 percent of companies inevitably fail has never deterred Khosla from taking risks. Even though not all of his investments pan out, he knows it’s still important to take bold action.

He went on to point out that some of the Silicon Valley’s biggest successes also risked being its biggest failures.

The best thing to happen to Steve Jobs was Apple’s failure, said Khosla, and it was key to Steve Jobs becoming one of the most influential figures in the history of technology. While Jobs was crucial to Apple’s early success, he was forced out of the company, and his follow up venture, NeXT, was largely seen as a failure. However, when Apple brought him back, Jobs had the freedom to swing for the home run, because the company was on the verge of filing for bankruptcy and had nothing to lose.

Khosla Ventures recently raised a new $1.05 billion fund, with half devoted to cleantech.