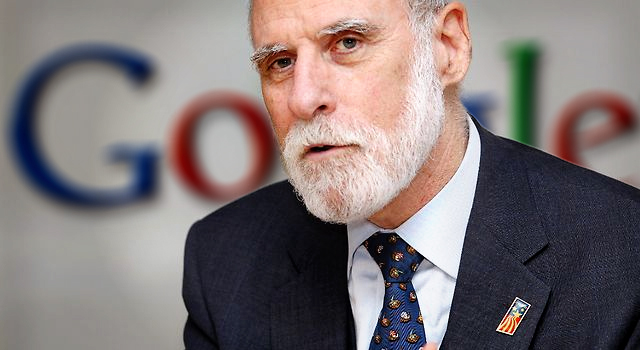 Vint Cerf, one of the godfathers of the web and chief Internet evangelist for Google, wrote a controversial op-ed for the New York Times today saying that Internet access is not a human right.

With all the protests and unrest around the world being fueled by social media and access to the Internet, people started discussing the idea of the Internet as a human right, something every person on Earth should be privy to no matter his or her circumstance. In light of uprisings in Tunisia, Egypt and other countries, the United Nations went on to declare that the Internet access was a human right back in June. “Given that the Internet has become an indispensable tool for realizing a range of human rights, combating inequality, and accelerating development and human progress, ensuring universal access to the Internet should be a priority for all states,” the U.N stated in the June report.

But Cerf — ever a thought leader — has decided against this idea. He asserts that the Internet (and any other form of technology) is only an enabler of human rights. He believes that human rights “must be among the things we as humans need in order to lead healthy, meaningful lives, like freedom from torture or freedom of conscience.” And he further argues that if we decide technology belongs in this category, we’re over-prioritizing. He writes:

It is a mistake to place any particular technology in this exalted category, since over time we will end up valuing the wrong things. For example, at one time if you didn’t have a horse it was hard to make a living. But the important right in that case was the right to make a living, not the right to a horse. Today, if I were granted a right to have a horse, I’m not sure where I would put it.

The best way to characterize human rights is to identify the outcomes that we are trying to ensure. These include critical freedoms like freedom of speech and freedom of access to information — and those are not necessarily bound to any particular technology at any particular time. Indeed, even the United Nations report, which was widely hailed as declaring Internet access a human right, acknowledged that the Internet was valuable as a means to an end, not as an end in itself.

When it comes to the idea of the Internet as a “civil right,” Cerf buckles a bit. He believes it’s much easier to make the case that the Internet is a civil right because it is conferred by the law and “not intrinsic to us as human beings.” The wide spread of telephone lines and broadband Internet throughout the U.S., even to the remotest regions of the country, is a good example of “universal access” that basically amounts to a civil right.

I don’t agree with Cerf, but it’s something I’ll have to think more about. Cerf categorizes the Internet as just a form of technology, but what if the Internet is more than that and something that can inherently make our lives better or more complete? Someone with Internet access can experience and change the world more so than someone without access. And as a firm supporter of worldwide universal access, I find it easier to make the argument that someone must have the Internet if it is a human right and not just a piece of technology.

What do you think? Is the Internet a human right, a civil right, both or neither?