Since its launch in 2006, software from a Seattle startup called Wetpaint has been used to build nearly a million wikis where a company’s customers and fans create the content. That’s pretty impressive, but Wetpaint chief executive Ben Elowitz says some companies weren’t satisfied — it would be even better if they didn’t have to create the wiki on a separate site.

Wetpaint addresses that need with its new release, dubbed Wetpaint Injected, which does exactly what the name says — it injects wiki functionality into any webpage. So rather than creating a separate page for, say, a VentureBeat fan community (hey, it could happen), we could allow our readers to update our stories by adding wiki-style entries to the main page. And that, Elowitz says, improves traffic and search engine optimization to our main site, rather than pulling users to another page. (See screenshot of Wetpaint Injected at the game site IGN, below.) 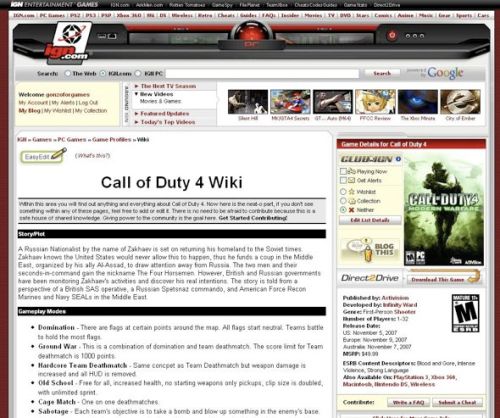 When we wrote about Wetpaint more than a year ago, we were most impressed with its convenience — it was just really easy to set up a new wiki. The company has carried that approach over to its new product; Elowitz says the new functions can be added by just pasting a short snippet of code to a webpage. At the same time, the user-generated content’s look and format is customizable and should blend in with the rest of the page.

This is a smart move, and should further help Wetpaint stand out from competitors like PBWiki. As more and more sites add features — wikis, comments, polls — that allow them to interact with their readers, it makes sense to integrate those features as directly into the main browsing experience as possible. And the ability to add wiki capabilities to any page with just a few lines of code is totally unique, Elowitz says.

Companies should also be attracted by the fact that the feature is free for up to 100,000 impressions per month, and then charges based on a revenue-sharing model.

Elowitz says Wetpaint’s approach has already started paying off, with 925,000 websites built on the company’s platform and 20 percent growth in recent months. But he also says it’s time for the company to start growing more aggressively, which is why he’s raised a $25 million third round of funding, bringing Wetpaint’s total financing to $40 million. That’s a hefty sum, particularly when you recall that we were already startled by the size of Wetpaint’s $9.5 million second round. But Elowitz says the funding matches the company’s ambitious plans to “wikify” every page on the web.

The round was led by DAG Ventures and an undisclosed investor, with participation from existing backers Accel Partners, Trinity Ventures and Frazier Technology Ventures.

Update: Kara Swisher reports on yet another investor, Fidelity Investments (perhaps that “undisclosed” lead investor that Wetpaint mentioned?). Fidelity is the same major institutional backer that invested big bucks into Slide. And in the comments below, PBWiki’s Chris Yeh notes that his startup offers a similar feature, but hasn’t emphasized it.