Neither Facebook nor MySpace nor other international social networks can claim to be the single largest one in the world, if a recent press release by leading Chinese social network Qzone is to be believed. The site, part of the larger Tencent internet portal, claims to have had more than 200 million monthly active users in January, according to China Web2.0 Review (a translated version of the release is also available at the Web2Asia blog). Facebook, otherwise considered the largest social network in the world, self-reported 175 million monthly active users earlier in February. 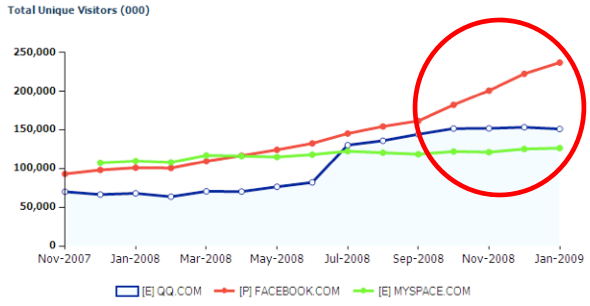 Unfortunately, there’s no referee available to review this press play by Qzone. Third-party analytics service comScore reports that Facebook has more than 225 million monthly active users, while MySpace has 130 million. Given the discrepancy with Facebook’s internal reporting, at least, it’s hard to take comScore’s numbers in this category of web service at face value. While comScore is recognized as one of the better analytics services out there, web companies large and small tell us that it gets their traffic numbers wrong. Still, it provides one data point suggesting that Qzone is not the world leader.

Meanwhile, web traffic analysis in China is even worse, so who’s to judge Qzone’s numbers? Chinese entrepreneurs and investors generally consider third party analytics (comScore and every other one) in the country to be suspect, as they have uniformly told me. “Get a company’s Google Analytics numbers if you want anything close to accurate,” is one refrain. The problems range from inaccurate third-party methods of tracking traffic to efforts by some web companies to willfully alter third-party tracking results. Also, Google Analytics isn’t perfect, either, as we and other bloggers regularly notice when comparing its measurement of our traffic with other third parties.

So let’s forget the game of social network one-upmanship for a moment. Perhaps the most interesting thing about Qzone’s release are its other self-reported user stats. The site, which lets users upload and share photos, blog, and add friends, had more than 150 million of its users perform at least one of those tasks at least once in January. Daily, around four million users upload a total of 60 million photos daily, and around 9.5 million new blog entries are created. Qzone is integrated with Tencent’s popular messaging service, QQ, which itself averages up to 50 million simultaneous users. The service is certainly massive, and Tencent has long been monetizing through virtual goods — something its U.S.-based rivals have only started looking into. Chinese users, at least, have shown themselves willing to generate revenue for social networks in the country; which so far is better than what many international rivals can show.

So who’s number one in the world? 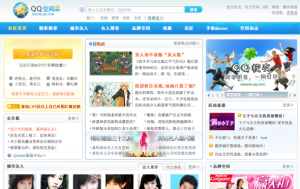 Enough talk about revenue — back to the debate about who’s number one in traffic, in this still-emerging industry. QQ also launched a social networking service for college students last spring, as China Web2.0 Review’s Tangos Chan notes, called QQ Xiaoyou  — in part, it’s a defensive move in the event Facebook or other social networks try to go for that demographic. Xiaoyou has more than 20 million users. So add more chalk marks to Qzone’s user-count column, perhaps? Chan also notes the company has been working on an international version to reach beyond its mainly-mainland China user base, although its unclear how many users that effort is gaining.

TechCrunch’s Robin Wauters, who pulled the comScore January traffic graph (above) for Facebook, QQ and MySpace, concludes “if QQ doesn’t operate the world’s largest social networking sites already, it will soon.” There’s certainly quite a large market opportunity for the company — and for rivals like Xiaonei and others — within China. The country was estimated to have more than 250 million internet users as of last year, less than 20 percent of the total population. Expect more Chinese people to go online and start using sites like Qzone.

But, Wauter’s comScore graph is one reason I respectfully draw the opposite conclusion from him. Even with the reasons to be skeptical of comScore’s numbers for any social network, the massive lead Facebook seems to have over MySpace and QQ says it all. The company is growing fast in the U.S. and around the world — and there are more than 1.5 billion internet users out of nearly 7 billion humans, according to another estimate. Facebook offers a wide range of self-reported stats to back that up.

If Qzone wants to compete against the likes of Facebook, MySpace and other social networks for users around the world, it will need to prove it can get everyone everywhere using its service rather than established international competitors. So far, it has just done a good job of dominating in a — relatively speaking — niche market.