Activity in the USA and Europe firmly dominates the venture capital (VC) industry. Where ‘the Valley’ led the way, start-up ecosystems have sprouted across the whole of Europe. Be it financial technology in London, ecommerce in Berlin or advertising technology in Paris, over the last decade Europe has grown a number of healthy start-up centers encouraging entrepreneurs to take a leap of faith in their ideas and start building a business.

As Figure 1 shows (based on data from CB Insights Venture report 2014), in 2015, VCs invested 5.4 times more money in the US compared to Europe. VCs also closed more than three times as many deals in the US as in Europe. 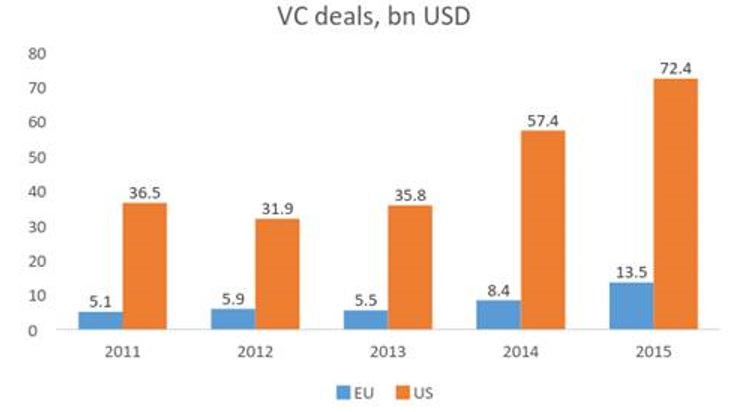 Despite the massive difference in volumes of capital, the last five years have seen larger growth in Europe in terms of capital investment. With a compound annual growth rate (CAGR) of 21.5%, growth in Europe is almost 10 percent larger than in the US (14.7% CAGR), but this is understandable given it comes from a lower base. It will take some time to catch up.

So, why has a comparable VC industry not grown in such a strong economy? To investigate, we’re taking a deeper look into distribution of deals by stage.

Given that distribution appears relatively stable for these three years, it is fair to argue that securing growth financing is significantly harder in Europe compared to the US. Compared with an early stage to growth stage ratio of around 0.5 in the US, Europe’s ratio is significantly lower at just 0.2. This smaller ratio is a contributing factor to a further drop in volume at the late stage of financing. 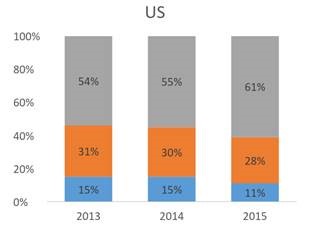 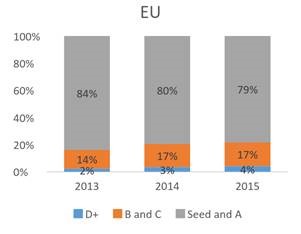 As Figure 2 illustrates, European VC investment suffers from a significant Series B gap — a large number of early investments fail to reach the growth funding stage (again, the data here is from CB Insights Venture report 2014). Considering the European market, there are two possible reasons for such a dramatic gap in conversion from Series A to Series B rounds.

Point one is difficult to substantiate because proving a company that failed to grow was ‘bad’ is difficult. With so many variables contributing to why young companies fail, the theory can’t be objectively supported.

However it is clearly evident that US VCs have been raising significantly larger funds to support growth by funding portfolios through the later stages.

As Figure 3 shows (based on data from from the Pitchbook Q4 2014 US report), 2006 to 2014 the majority of EU funds were smaller than €50 million, which restricted their ability to be involved in the growth stage rounds of Series B and above. While the median fund size did jump in 2015, this is not exactly a good sign: The number of closed funds dropped to 54, so the median increased because a lot of early stage funds failed to raise money.

Looking at Figure 4, we see that in America between 2005 and 2009 and in 2013, more than 20 percent of the funds were in the $100-250 million bracket (decreasing in the other years), focusing on rounds B and C, while a much smaller percentage of European funds targeted this sector throughout most of those years. The percentage of Series B deals in both geographies is consistent with the data for fund size. 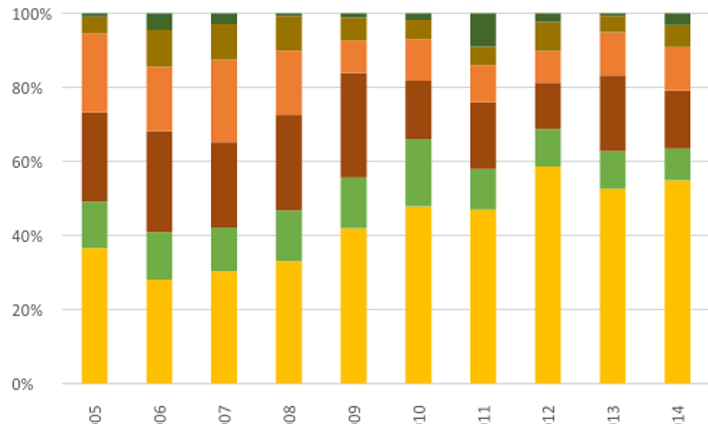 Due to limited late-stage funding, European companies are forced to cut growth, reduce expense, and become profitable. Meanwhile, well-funded US counterparts continue to invest their sizable funds into product and sales, allowing them to dominate their markets. Consequently European firms never reach their potential. The average valuation of merger and acquisition in Europe is significantly lower than in the US, and the gap has increased in the last two years (Figure 5). 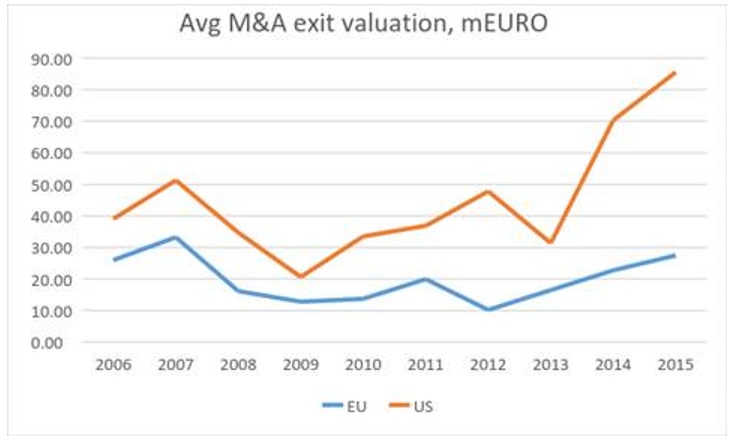 This gap means that investors in Europe have a major opportunity to plug the gap in the market with growth and late stage funds that can support the large number of seed and Series A investments made in the region. Only when the funds are in place to support the ecosystem will Europe ever stand a chance of competing with the much more mature American VC market.

Eugene Levin is a partner at Target Global, a Moscow-based VC firm with offices in Berlin, San Francisco, and Tel Aviv.