This post is sponsored by Samsung Electronics America. See samsung.com/apps for information about which apps are available on specific models. The views expressed here are solely those of the author and do not necessarily represent the views of Samsung Electronics or its partners. VentureBeat applied its usual strict standards of editorial independence in writing this post.

As our televisions are getting smarter, TVs are quickly beginning to parallel the development of smartphones. Consider the app: Just as with smartphones, we’re beginning to see apps take off on TVs with platforms like Google TV, Yahoo’s Connected TV and Samsung’s Apps. At the same time, many websites are choosing to develop TV-friendly interfaces instead of going the app route — take, for example, YouTube’s LeanBack and Vimeo’s Couch Mode.

With Couch Mode, which is built using HTML5, Vimeo also brings up an issue that many companies have faced in the smartphone world: Should they develop a native app, or opt for a website written to the HTML5 standard and optimized for mobile devices?

The situation is slightly different when it comes to TVs, where full Web access isn’t as common as apps. And even apps are only available with certain television brands, or require an external set-top box like Logitech’s Revue with Google TV.

But with smart TVs on the rise — adoption grew 124 percent this year over last, and they’re expected to account for 54 percent of the total flat panel TV market by 2014 — more companies will need to figure out how exactly they want to approach this market.

The case for TV apps

As with mobile apps, there are a variety of different platforms for Smart TV apps. Yahoo has been in the business for perhaps the longest time with its Connected TV widgets, which are available on TVs from Sony, Samsung, LG and more. Samsung is pursuing a Smart TV initiative of its own on newer sets, and the budget brand Vizio is bringing apps to its sets as well. And of course, there’s Google TV, which brings apps and Web access together with live TV. 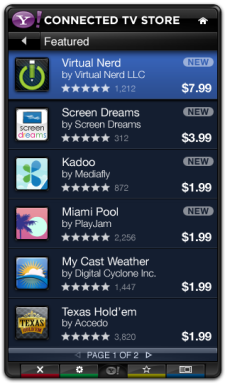 Why build a TV app? For the longest time, it was the only way to get your service on televisions. And at the moment, it’s still the most surefire method, since not every TV platform offers a Web browser. TV apps have been around for some time, but they started out slow — early smart TVs just offered simple apps for sites like YouTube and Flickr. They had nothing in the way of app market places, so there weren’t many apps to choose from, and third-party developers were shut out for the most part.

Now that’s beginning to change. Yahoo has a wide collection of widgets available on its Connected TV service, and developers can submit their own and charge users to use them. Samsung also has many apps available and is open to third-party developers. Google has a few apps built-in to Google TV, and it says that a full app marketplace is coming early next year. Apple will likely bring apps to its new Apple TV as well, but it’s uncertain how long that will take.

TV apps generally have more capabilities than optimized websites. Netflix’s streaming service, for example, is available as an app on pretty much all Smart TV platforms. This allows Netflix to include all of the licensing software required to give users access to its content, something that isn’t possible via an optimized website.

Of course there are downsides to the app route. For one, since there are so many different platforms, companies will have to develop individual apps for each of them. With apps, you’ll also have to deal with the quirks and limitations of every Smart TV platform, while also being beholden to the companies who own the platforms.

The case for optimized websites

Instead of building a special YouTube application for Google TV, YouTube developed LeanBack, a couch-friendly interface for viewing high-definition YouTube videos. That alone speaks volumes to the power of the TV-optimized website. Not only is LeanBack a great solution for Google TV, it’s also accessible by any computer (making it ideal for home theater PCs), as well as the latest version of Boxee’s media software via its web browser (including its set-top box).

Unlike TV apps, building one TV optimized website could easily serve multiple smart TV platforms. While not every smart TV platform gives users access to a web browser, that will likely change over the next year. And if all else fails, companies could technically turn their TV optimized sites into TV apps without much trouble.

It’s worth noting that YouTube LeanBack is built with Adobe Flash, while Vimeo’s TV-optimized Couch Mode instead relies on HTML5. In my testing with Google TV, I couldn’t find any discernible performance difference between the two sites. But given that HTML5 is quickly rising in popularity — it now accounts for 54 percent of all Web video, according to video-tracking service MeFeedia — I suspect that it will become the standard for future TV-optimized sites.

With the advent of Smart TVs, apps have yet another platform to conquer. But I suspect we’ll see the same battle play out between apps and optimized sites as we’re seeing on smartphones. At least this time around, we have the added wisdom of seeing how the smartphone app ecosystem has built up. It’s clearer now what sort of services work better with apps, versus those that just need a TV-optimized site.

No matter the method, they both serve to make our TV’s smarter.